Get dressed Opera at the Museum of Costume 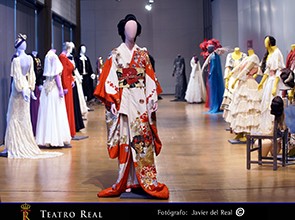 The Costume Museum joins the activities of the Opera Week of the Teatro Real, which will take place the first week of May, with the exhibition Dress up for Opera, in which a selection of costumes and wigs used will be exhibited in some of his most beautiful productions, and whose pieces have been prepared in the workshops of tailoring and characterization Theater.

Thursday 30 of April, to 12.00 hours, The exhibition was inaugurated at the Museo del Traje with the presence of the general director of the Teatro Real, Ignacio García-Belenguer, the deputy director of the Museum, Rodrigo de la Fuente, and the head of the Theater Tailoring and Characterization Departments, Ovidio Ceñera, who will accompany us on the tour of the exhibition to offer technical explanations of the elaboration of the pieces and their most curious data.

Between days 30 April 17 of May, with free access for all audiences, you will be able to discover a part of the magic of the lyrical theater, through the costumes that recognized singing figures have dressed in such emblematic titles as Madama Butterfly, La Traviata, La bohème or The Marriage of Figaro.

The productions of the Teatro Real selected for the exhibition Get dressed up in opera are:

The short life, Manuel de Falla, with figurines designed by Rosa García Andújar. this title, next to the ballet The Three Cornered Hat, from the same composer, formed the program for the reopening of the Teatro Real in October 1997.

· Madama Butterfly, Giacomo Puccini. In 2002, the winner of a Óscar Franca Squarciapino was responsible for one of the most beautiful costumes designed for this title.

· The Traviata, de Giuseppe Verdi (2003) Y The Coronation of Poppea, de Claudio Monteverdi (2010), they had the participation of one of the most appreciated names in the opera houses of the world, Pier Luigi Pizzi, responsible for both wardrobe productions, scenography and stage direction.

· Bohemian, Giacomo Puccini (2006). Costumes Michael Scott were one of the highlights of this production, that reflected with great realism the bohemian atmosphere of Paris 1830.

· The Marriage of Figaro, de Wolfgang A. Mozart (2009). Renata Schussheim knew how to reflect, with enormous success, the class difference between the characters that are part of the plot of this opera buffa. Schussheim's pictorial work has been exhibited at the Venice Biennale.

· The public, Mauricio Sotelo (2015). The work of Federico García Lorca, first conceived as an opera, had its world premiere last February at the Teatro Real. The creator of the complex wardrobe of this production was Wojciech Dziedzic.