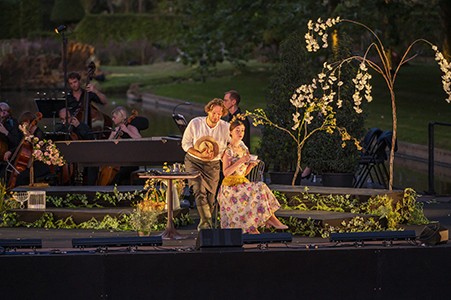 William Christie debut in the Palace of Arts with 'La Finta Giardiniera', Mozart, this Sunday, 10 of November, to 18.00 hours. The Main Hall welcomes this unique feature of the first comic opera of the genius of Salzburg, which is semi-staged version.

Respected harpsichordist, orchestra director, musicologist and professor visit the arts center with training, Les Arts Florissants, which this year celebrates its 40 anniversary and is considered the 'ensemble' reference in the recovery and interpretation of baroque and classical music on ancient instruments.

'La Finta Giardiniera' is the second incursion of Les Arts this season in the Mozartian repertoire after the success of 'Le nozze di Figaro', which opened 'Les Arts is Opera'. Those interested in attending can purchase their tickets at the theater box office, in www.lesarts.com and telephone sales line 902 202 383. The ticket prices range from 24 Y 60 euros.

Mozart composed with just 18 years 'La Finta Giardiniera', opera buffa in three acts with libretto by Giuseppe Petrosellini. Released on 13 of January of 1775 Salvatortheater in Munich with great success, This is the first comic opera of the genius of Salzburg.

Comedy of deception, and disagreements between three couples with moments of great musical nobility. The action takes place on a farm on the outskirts of Milan in the middle of the eighteenth century. To be near his beloved, Count Belfiore, Marchioness Violante Onesti decides the impersonating a young gardener, Sandrina, to seek employment in the court of the 'podestà' hacienda. His servant pretending to be his brother Nardo.

These and other actors as Arminda, Sobrino of the 'podestà', Ramiro knight and maid Serpetta plunge into chaos cheerful in three acts, in which all pairs of lovers have their own happy ending.

Le Jardin des Voix has become an essential project for both the public and programmers, who they are in this space the pool of young talents who join the international music scene, entre ellos Sonya Yoncheva, Read Desandre, Marc Mauillon o Christophe Dumaux, that were, at the beginning of their careers, the first fruits of this garden flourishing. On the occasion of 40 Anniversary Les Arts Florissants, the ninth edition of Le Jardin des Voix has chosen the interpretation of the opera 'La Finta Giardiniera', written by Mozart 18 years and, so, even younger than these singers, not even reach thirty. For a program called "The Garden of Voices", the choice of this "feigned gardener" is not innocent, since it was created in the gardens of William Christie, in Vendee (France), in semi-staged version signed by Sophie Daneman.

clavecinista, director, musicologist and professor, William Christie is a pioneer in the rediscovery and approach of French Baroque music to the general public. A native of Buffalo and educated at the universities of Harvard and Yale, his career took a decisive turn when he formed Les Arts Florissants. At the head of this set, in 1987 He achieved its public consecration to the production of 'Atys', Lully, Opera in Paris, project followed by many successes focusing on French and European Baroque repertoire. Interested in deepening its work as a trainer, William Christie, along with Les Arts Florissants, I believe in 2002 Le Jardin des Voix, a biennial academy for young singers.

It is one of Baroque vocal and instrumental groups of the world's most sought. Founded in 1979 por William Christie, It specializes in the interpretation on period instruments and has played a pioneering role in the recovery of the repertoire of the seventeenth and eighteenth centuries. Under the baton of William Christie and Paul Agnew, the set offers about a hundred concerts and opera performances in the most prestigious concert halls in the world.