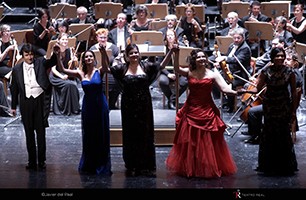 Since 1963 the International Singing Contest Francisco Viñas in Barcelona. Thus, homage is paid to the Spanish tenor who played a fundamental role in the dissemination of the work of Wagner in Spain.

During all these years they have been thousands of participants and many venues that have hosted the final. Some of the award-winning voices in their different editions have been as prominent as Ewa Podles, Olga Borodina, SOMI which, Aquiles Machado, Vicente Sardinero, María José Moreno, Violeta Urmana, Javier Camarena, among many others.

Last 24 January the awards of his 53 edition in the Gran Teatre del Liceu and the Teatro Real, co-organizer of the contest, have been presented this past 21 February the winners of this edition.

American mezzo J´nai Bridges, first prize of the Contest, has a great stage presence. Although somewhat static, has a voice with personality and is very elegant on stage.

The also Russian mezzo-soprano Yulia Menniebaeva, has a dark voice color, typical of the mezzo-sopranos of those latitudes. Dense and powerful voice, although with some nasal sounds, He showed off in the Marfa area by Jovánschina, from Modest Músorgski, showing great dominance. He won the Russian Music award for something, apart from the second Prize of the Contest.

Selene Zanetti, Italian soprano who also won the second Prize and the Verdi Prize. His interpretation was the most delicate and full of sensitivity. Loud voice and interesting dark tones, interpreted a sense “As in this dark hour” by Simon Bocanegra, from Verdi, with a temper more typical of an already extensive career.

The most applauded was the Spanish soprano Sara Blanch, fourth prize, Zarzuela Award and Best Spanish Singer Award. Not in vain was I at home. Great security on stage, accompanied by brightness and expressiveness. Very good treble, and a fresh and relaxed sound to interpret “The song of the nightingale” by Doña Francisquita, from Amadeo Vives, “They call me the gorgeous”, from The Barber of Seviila by Giménez and Nieto and an intense “That look at the knight… I also know the magic virtue”, by Don Pascual de Donizetti.

An excellent recital that guarantees a bright future.