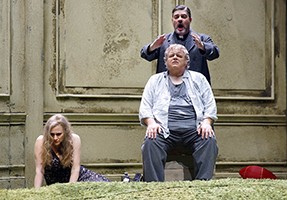 Parsifal, last composition Wagner, He was released from his exclusive contract with Bayreuth he 31 December 1913. That night was premiered at the High school Barcelona and the next day Teatro Real from Madrid. Written in turbulent times, perfectly reflects a destroyed world and the need to find a liberating exit or something like a messiah. That deliverer looking Amfortas with his knightly brotherhood is Parsifal, the fool who does not know his name and only come to wisdom through compassion. Wagner is once again a visionary ahead of his time, because we all know the events after 1914.

That's why the elegant production Claus Guth inspired by The Magic Mountain Thomas Mann, It is just as relevant and pertinent. Located in the interwar period, a hospital is the perfect setting to reflect the consequences of the events that marked the European society of the first half of the twentieth century. A place where sickness and death reflect the great social contradictions, political and moral of the time.

Guth uses this scenery to express the same paradigm. This permanent wound Amfortas is the metaphor of Europe after injury World War I. Scenography illustrated by projections showing images that concern us and we are uncomfortable. This Parsifal Claus Guth directly challenges us and invites us to reflect. Seeing as over all, seeking changes or cathartic leaders can lead to uncertain places. And Nightmares, like dreams, sometimes also they met.

A magnificent turntable provides spaces where different frames are developed. Again, a flow without beginning or end.

Parsifal can only be the end product of a genius like Wagner. And it is. The music flows permanently and the concept of space-time is different from conventional concepts. For his musical director, Semyon Bychkov, "In this work the key is related to the severity. These key changes, that can occur in a second, They are like a loss of gravity. As if we were in another galaxy but never knew in which ".

This ongoing evolution of reasons makes the music flow continuously without apparent beginning or end, always supported by the residue motivations accompanying characters and situations.

The musical direction is by Semyon Bychkov of, who knows perfectly read that continuous flow of the sound that gives, from the overture, the balance that require different orchestral voices that owns this architectural score. It was powerful sound made by an orchestra that gave answer to all indications the master of Russian origin. It sounded with a transparency and delicacy only matched by the ease with which it was executed. Tension achieved by the ropes, safety and precision metal woods produce a solid and agile sound. The created atmosphere would have fulfilled one of the wishes of Bychkov, continue in the fourth and fifth act, prolonging an ending that does not exist.

On stage an unequal distribution ran the rotating Guth proposed the rhythm that marked an excellent direction of actors.

Christian Elsner Parsifal was expressionless and interpretive limitations. Issuance required great efforts and was more than enough of nasal sounds. He defended his character with some dignity but was swallowed up by the orchestra on several occasions. His clumsiness on stage ruined the hero who must interpret, remaining completely absent of the evolution of a character with many shades.

The German soprano Anja Matches, one of the most sought-after Wagnerian voices today, Kundry offered a superbly delivered and interpreted in different profiles has its demanding character. Deviled registry changes are resolved, duly, with some stridency. Especially in the second act. At bass and means they would have been fine a little more strength to build the darkest Kundry. But overall his performance was high.

Franz-Josef Selig, with an elegant line of song, He carved a Gurnemanz authoritative and powerful stage presence, well exploited by the stage direction. He offered a good first act, with staccato phrasing and timbre of voice and vigorous round. But his performance was over and ended up being diluted unless part.

The German baritone Detlef Roth he played a dramatic Amfortas and torn. But his voice did not accompany the interpretation, and the inability to reach the most extreme registers, the difficulties joined the voice to express the inner anguish of the character.

Croatian to Jerkunica, as Titurel, It exibió one of the most interesting instruments night, with a voluminous and wide voice. Quite the opposite of Klingsor played by the Russian baritone Evgeny Nikitin, who walked scarce precisely those qualities, volume and breadth.

The chorus is another of the main protagonists of this monumental work. And the owner of the Teatro Real, which we are accustomed to illustrious interventions, I was not going to be less this time. A vocal brilliance and filling must be added the ability to interpret, especially of them, composing a scene of flower girls delightfully fresh and appetizing.