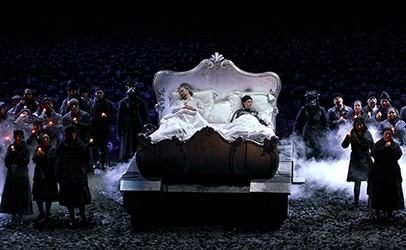 Often children's stories serve to present so candid situations or unsavory characters, which they are used to provide a reflection or critical moralizing purposes.

This is the case of the story The Golden Cockerel, written by aleksandr Pushkin, inspired by the Tales of the Alhambra Washington Irving, and that the librettist Vladimir Balsky adapted so that Nikolai Rimsky-Korsakov compose his fifteenth and last opera.

Rimski's initial ambiguity with the tsarist regime, it became clear rejection after the so-called Red Sunday massacre, in 1905, when the government of Tsar Nicholas II ordered the army to open fire on the citizens, including women and children, who had peacefully demonstrated to ask for better living conditions. The trauma that caused this massacre, not only did it stimulate subsequent revolutions in Russia, also mobilized many intellectuals who, as Roman, were censured for expressing their opposition to the regime through their works. This was the reason why El gallo de oro was not released until after the death of its author..

In this new production of the Teatro Real, in co-production with the Théâtre Royal de la Monnaie in Brussels and the Opéra National de Lorraine, its stage director, Laurent Pelly, performs a brilliant interpretation of the composer's idea in this work, turning criticism into satire to masterfully ridicule the tsarist regime, to the army and the people, that passes from the servitude of one regime to another, with disciplined docility. The successful scenography does not change anything of its fabulous character that is, definitely, which allows the work to have a powerful charge of intelligent and timeless aggressiveness. Pelly wants to convey the fear that ran through those historical moments and wants the public to make their own translation. The figurines, pelly design, contribute to give the magic and burlesque touch of the story.

The scenes unfold on what looks like a large mountain of rubble., those of the regime itself, about which the grotesque Tsar Dodon, always in pajamas, appears in a big bed, a way of the throne, from which she directs between dreams the destinies of a very little intrepid people. His inability is ridiculously reflected in a scene that shows his clumsiness in singing and dancing.. Next to him, her two sons, Zarévich Aphron and Zarévich Guidón, two simple and clumsy characters with a very good interpretation of the baritone Iurii Samoilov and the tenor Boris Rudak, respectively.

Governor Polkán, is another useless character, comfortably seated in office, of which the bass gives a good account Alexander Vinogradov.

The only character with a certain amount of authority is Amelfa, the housekeeper brought to life by the Polish mezzo-soprano Agnes Zwierko, that strengthened the character with its dark tones.

The bass Alexey Tikhomirov he was an excellent Tsar Dodon, clumsy and ridiculous. His powerful voice reminded us of those deep voices that are increasingly scarce.

Extraordinary work of the choir, both in the vocal and in the interpretive aspect. Highlight the group of noble boyars, superbly performed.

The young soprano Sara Blanch was the golden rooster from the pit. Small but important role that she bravely solved, power and better voice than some of those who were on stage.

the tenor Barry Banks played the whimsical astrologer. An interesting figure thanks to the peculiarity of his voice..

Ivor Bolton, whose work with Billy Budd is not forgotten, offers a magnificent version of this score with oriental overtones, to the taste of the time, full of bright and intimate moments. His connection and ascendancy over the orchestra is evident and the result is an undeniable solvency. He highlighted the interlude that Bolton himself interpreted after the second act, the piano, and one of the violinists in the orchestra, of the composers Efrem Zimbalist Y Fritz Kreisler, based on the opera itself.

A more than pleasant function with an interesting background that makes you think. Although Pelly himself said at a press conference: "I don't like to reduce a work to today", it is impossible not to move to the present. Examples are not lacking.