Falstaff, “I who lets you laugh at me” 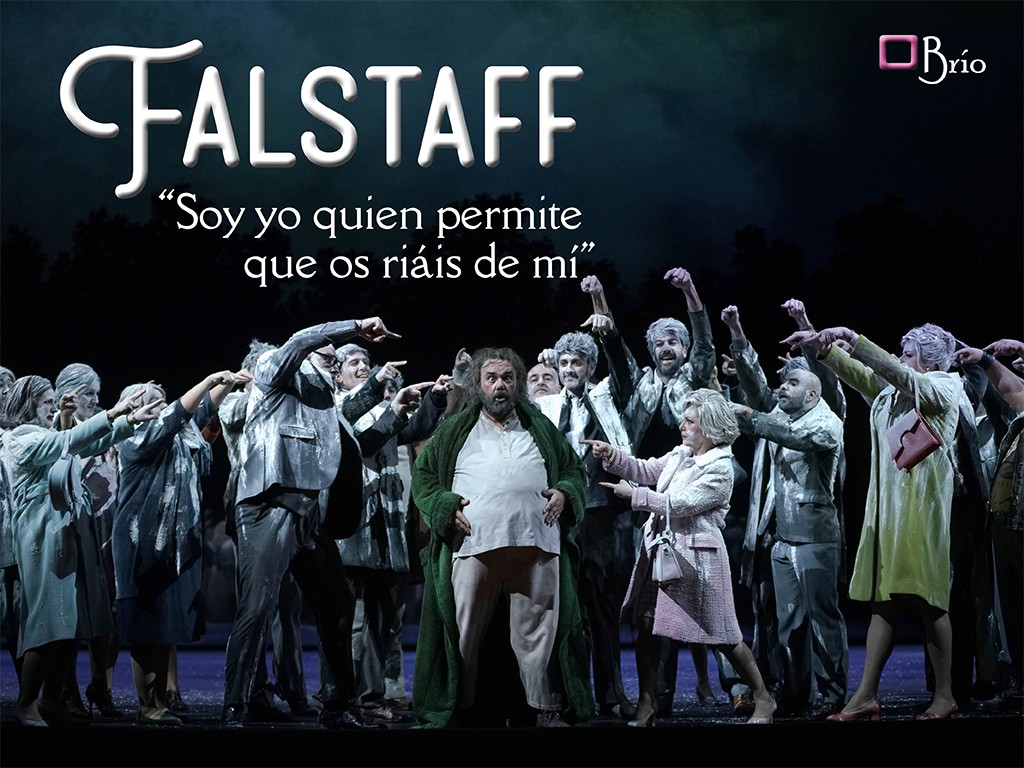 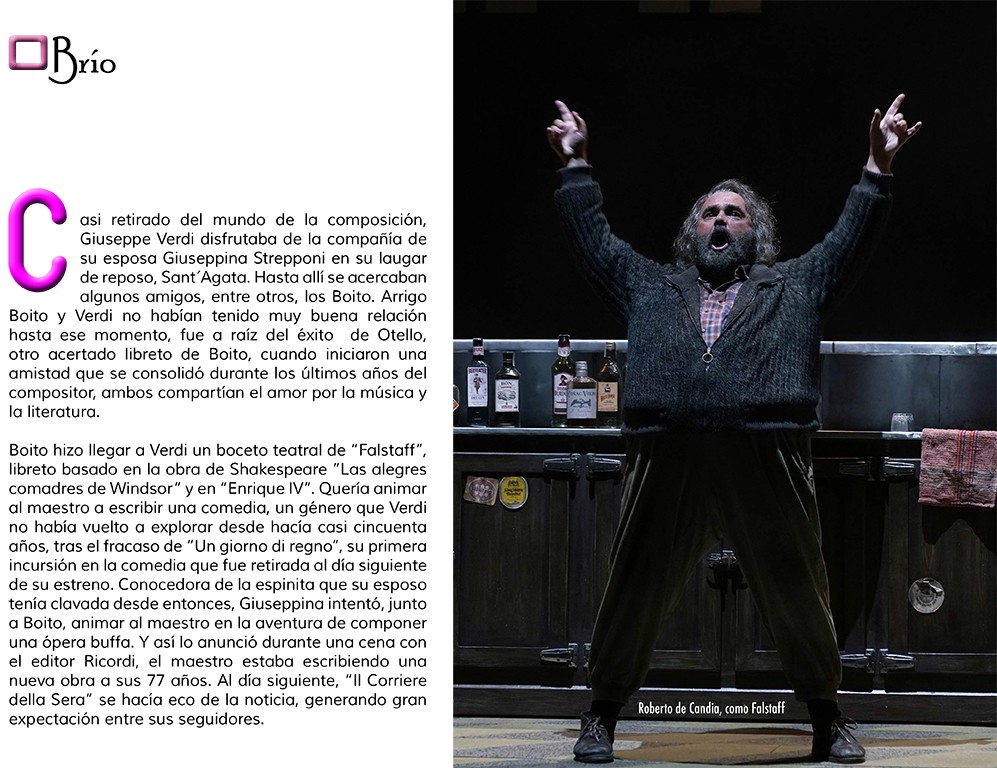 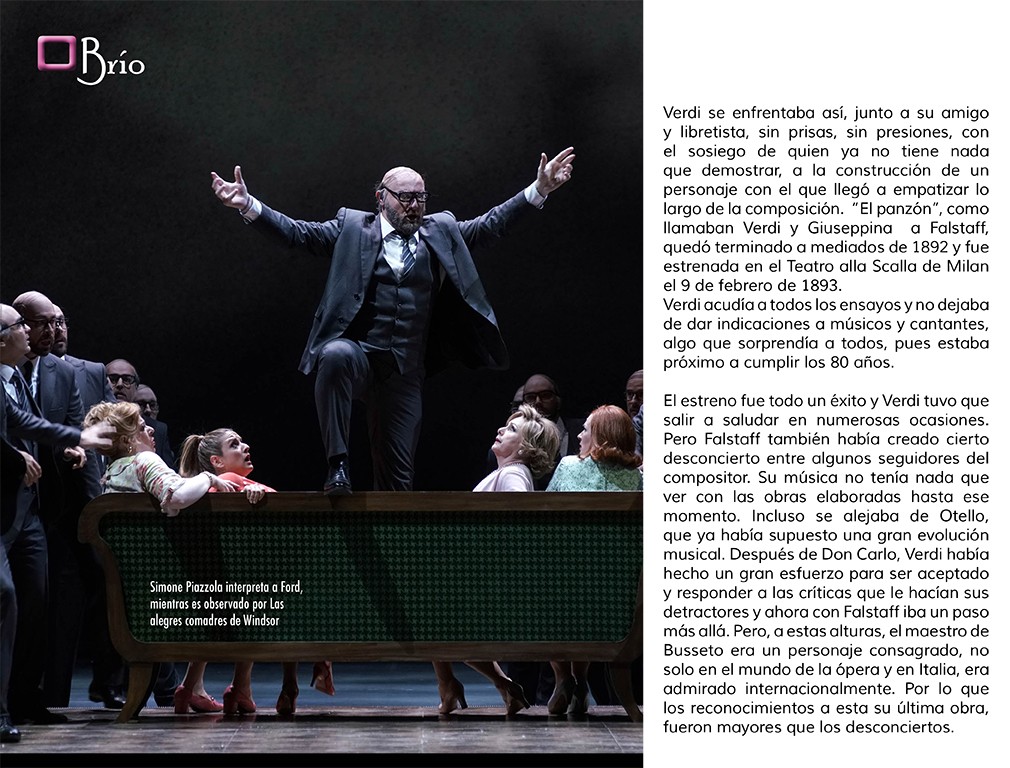 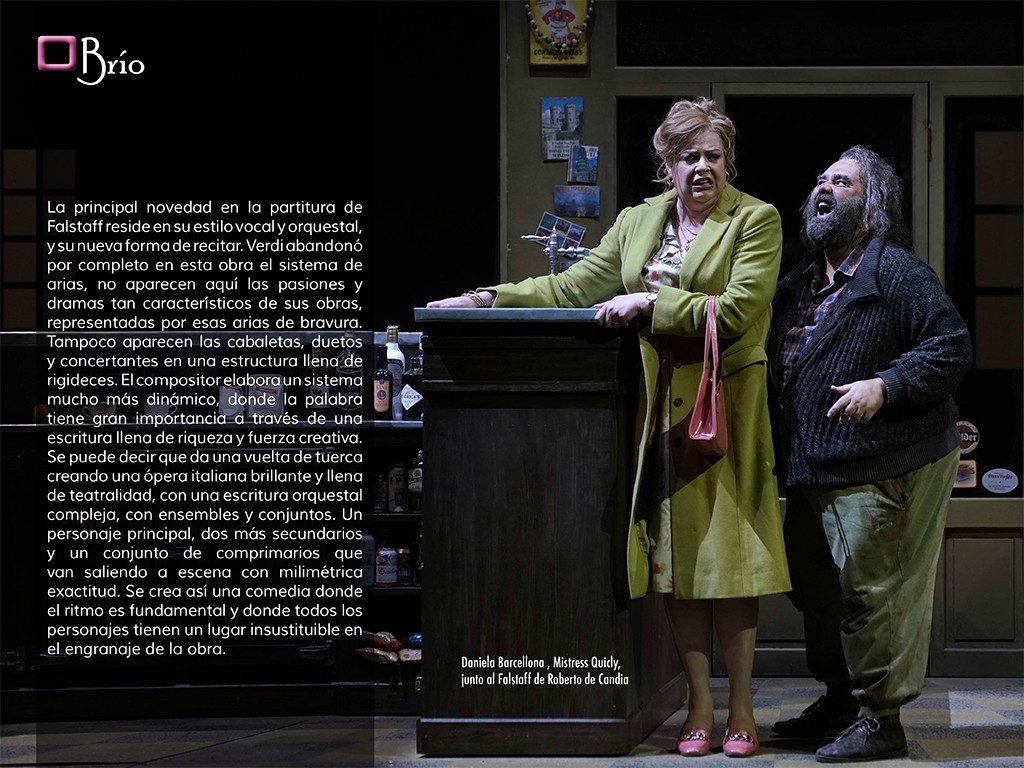 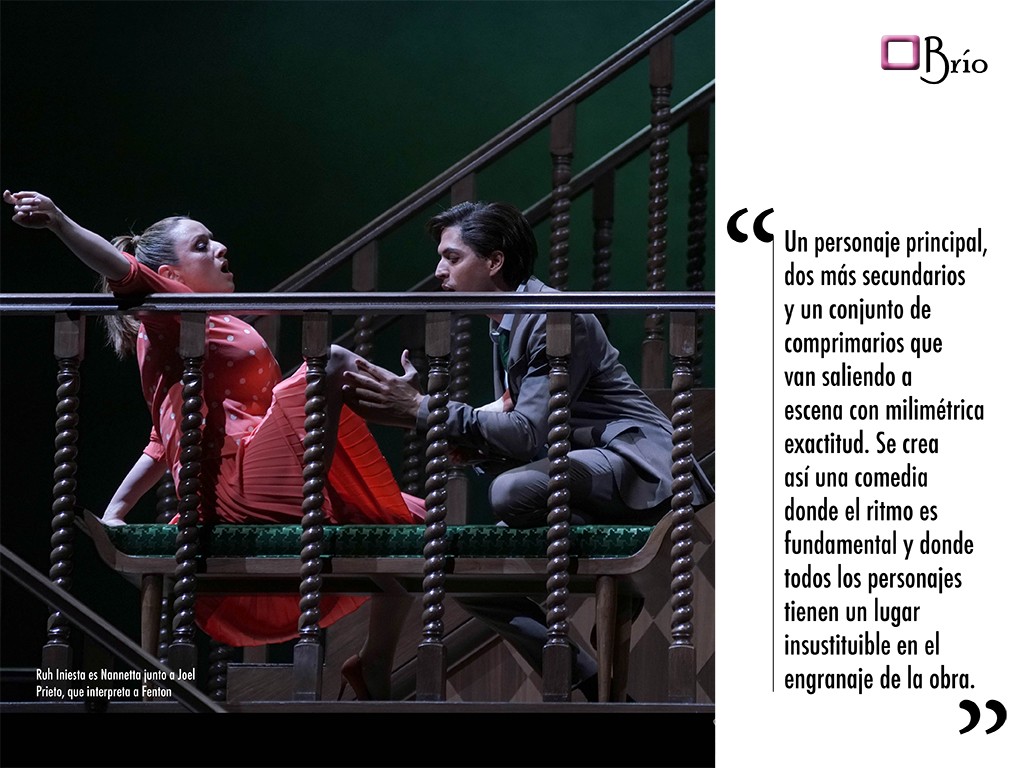 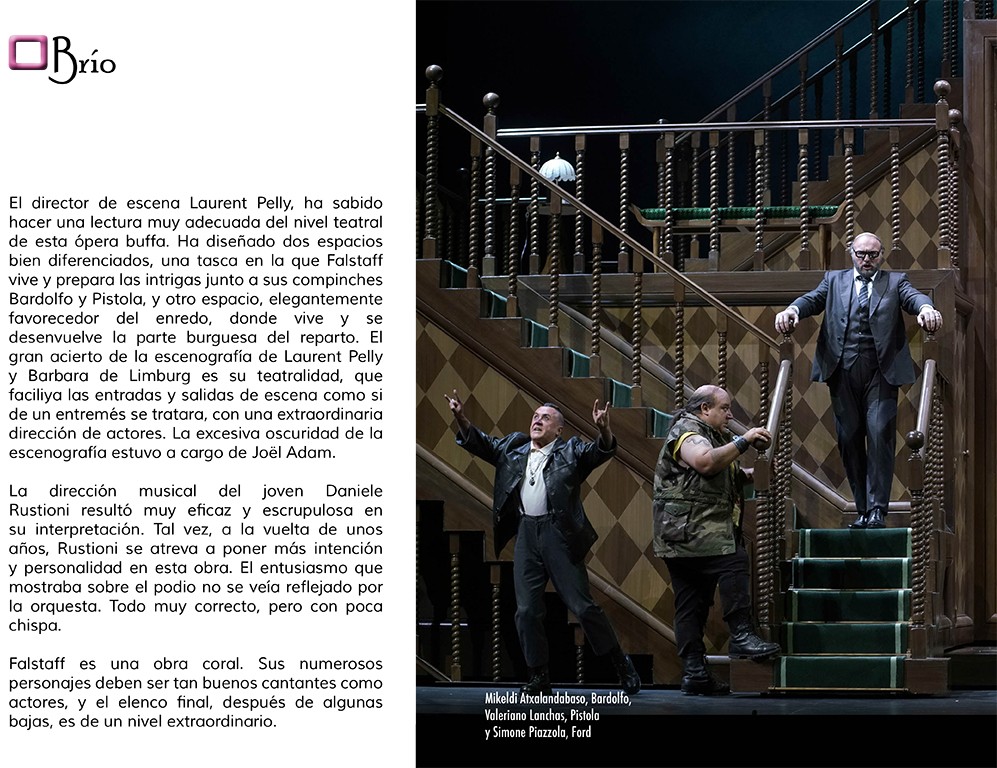 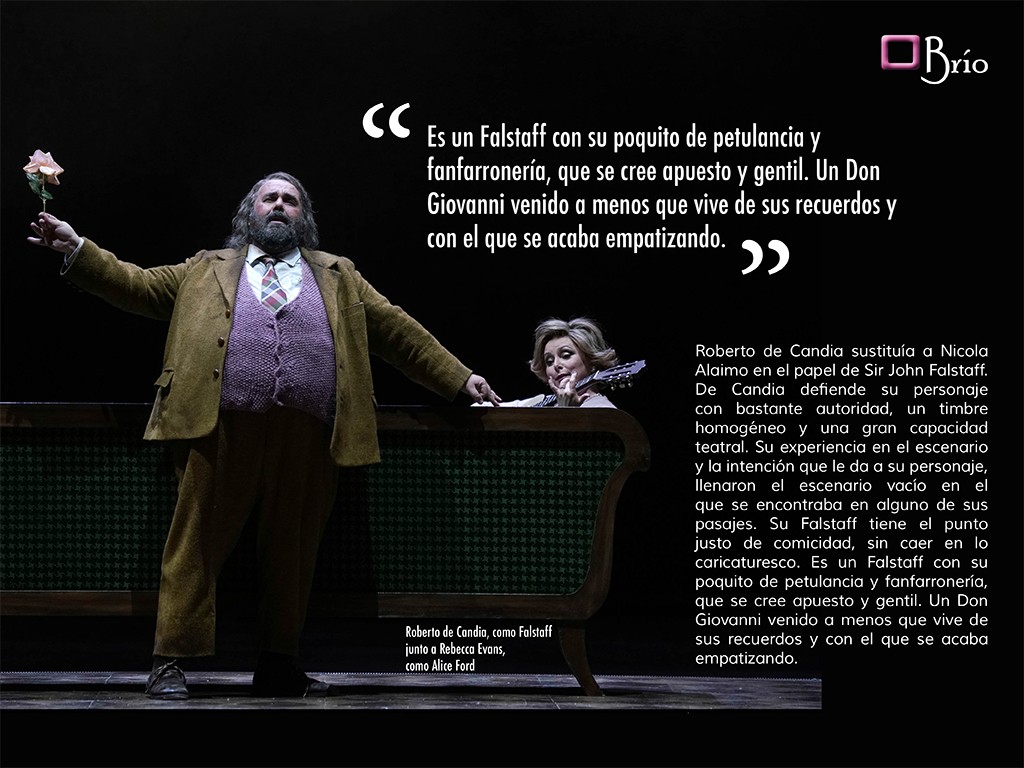 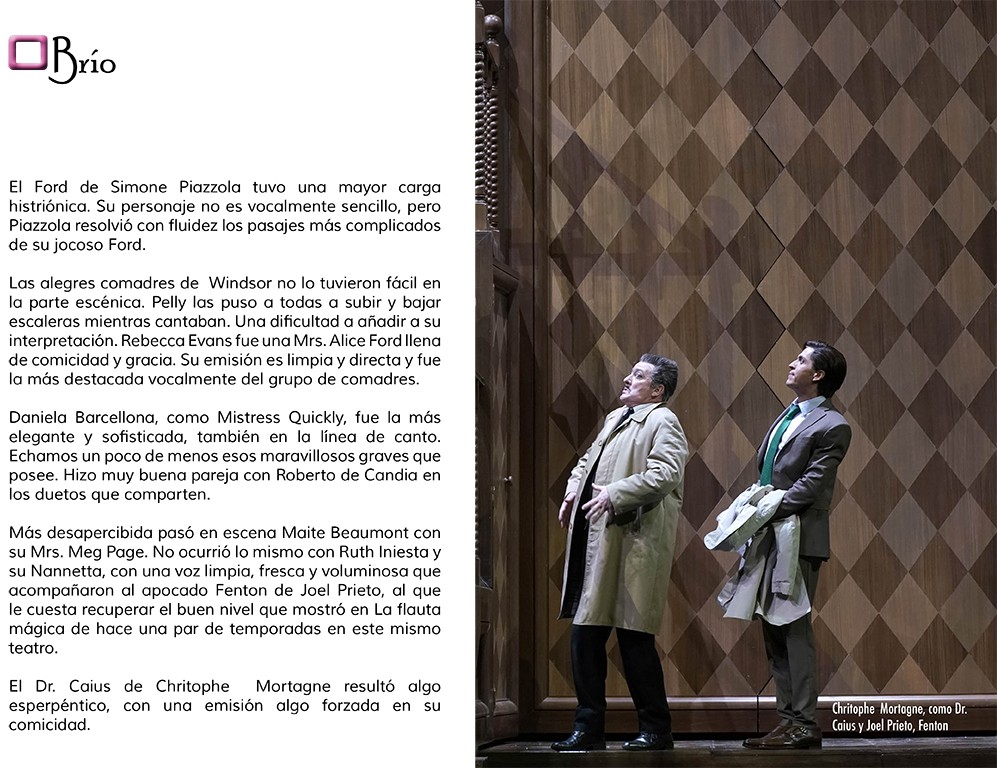 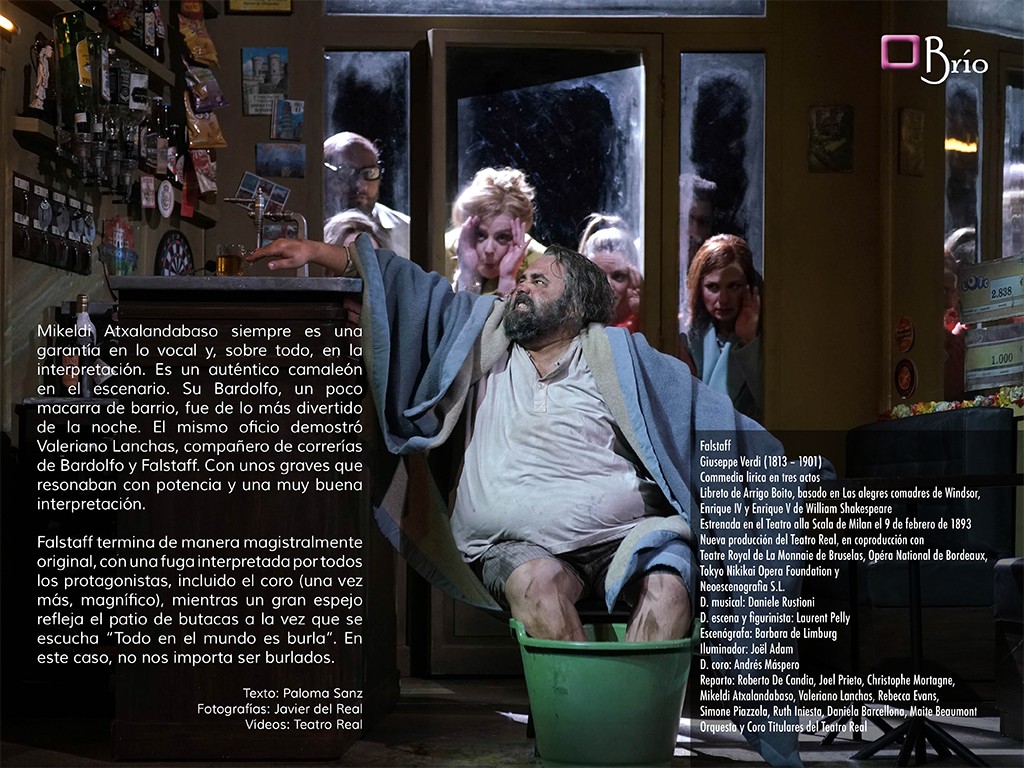 Almost removed from the world of composition, Giuseppe Verdi enjoyed the company of his wife Giuseppina Strepponi in his sleep Laugar, Sant´Agata. There some friends were coming, among others, the Boito. Arrigo Boito and Verdi had not had very good relationship so far, He was following the success of Otello, Boito libretto another successful, when they began a friendship that was consolidated during the last years of the composer, they shared a love of music and literatura.Boito did get a theatrical sketch Verdi "Falstaff", libretto based on Shakespeare's "The Merry Wives of Windsor" and "Henry IV". He wanted to encourage the teacher to write a comedy, a genre that Verdi had returned to explore for nearly fifty years, tras el fracaso de "A day of reign", his first foray into comedy that was withdrawn the day after its release. Aware of the thorn that her husband was stuck since then, Giuseppina tried, along Boito, encourage the teacher in the adventure of composing a opera buffa. And so he announced during a dinner with the publisher Ricordi, the teacher was writing a new play to their 77 years. The next day, "Corriere della Sera" if hacia eco de la noticia, It generated great excitement among his seguidores.Verdi faced so, with his friend and librettist, its praised, no pressure, with the peace of those who no longer has anything to prove, to build a character that came to empathize along the composition. "The paunchy", as Verdi and Giuseppina called Falstaff, It was completed in mid 1892 and it was premiered at the Teatro alla Scalla Milan on 9 1893.Verdi February came all rehearsals and kept giving indications musicians and singers, something that surprised everyone, for he was about to turn 80 years. The premiere was a success and Verdi had to go out to greet several times. But Falstaff had also created some confusion among some fans of the composer. His music had nothing to do with works made so far. Even he moved away from Otello, I had already been a great musical evolution. After Don Carlo, Verdi had made a great effort to be accepted and respond to criticism that he made his detractors and now Falstaff went a step further. But, at this stage, the master of Busseto was a character dedicated, not only in the world of opera and Italy, He was admired internationally. So the awards to this his last work, They were higher than those embarrassments.

The main novelty in the score of Falstaff lies in their vocal and orchestral style, and its new way of reciting. Verdi completely abandoned in this work the system arias, not appear here passions and dramas so characteristic of his works, represented by those ary bravura. They not appear the cabaletas, concertantes duets and a filled structure rigidities. The composer made a much more dynamic system, where the word is of great importance through a script full of wealth and creative force. It can be said that gives a twist creating a bright, Italian opera theatrical, with a complex orchestral writing, with ensembles and sets. A main character, two side and a set of comprimarios that come out on stage with pinpoint accuracy. a comedy where the pace is essential and where all the characters have an irreplaceable position in the work gear is thus created.

The stage director Laurent Pelly, It has managed to make a very accurate reading of the theatrical level of this opera buffa. He has designed two distinct spaces, a tavern in which Falstaff lives and prepares the intrigues with his cronies Bardolph and Pistol, and another space, elegantly flattering Tangle, where he lives and operates bourgeois part of the deal. The great success of Laurent Pelly scenery and Barbara de Limburg is its theatricality, that faciliya inputs and outputs scene as if it were an intermission, with outstanding direction of actors. Excessive darkness of the stage was conducted by Joël Adam.

The musical direction of the young Daniele Rustioni was very effective and scrupulous in their interpretation. Perhaps, around a few years, Rustioni dares to put more intention and personality in this work. The enthusiasm showed on the podium was not reflected by the orchestra. All very correct, but with little spark.

Falstaff is a choral work. Its many characters should be as good singers as actors, and the final cast, after some casualties, It is an extraordinary level.

Roberto de Candia Nicola Alaimo replaced in the role of Sir John Falstaff. Candia defends his character with enough authority, a homogeneous timbre and great theater capacity. His experience on stage and intention that gives your character, They filled the empty stage in which it was in any of its passages. His Falstaff has the right amount of humor, without falling into caricature. It is a Falstaff with his little smugness and swagger, and it is believed that handsome gentle. Don Giovanni came a living unless his memories and the one just empathizing.

Simone Piazzola's Ford had a higher load histrionic. His character is not vocally simple, but Piazzola smoothly resolved the most difficult passages of his jocular Ford.

The Merry Wives of Windsor didn't have it easy on stage. Pelly put them all up and down stairs while singing. One difficulty to add to its interpretation. Rebecca Evans was Mrs. Alice Ford filled with humor and grace. Its emission is clean and direct, was the most prominent group vocally comadres.

Daniela Barcellona, como Mistress Quickly, It was the most elegant and sophisticated, also in the ridge line. We take a little less wonderful that has such serious. Made very good match with Roberto de Candia in duets sharing.

Most go unnoticed on stage with Mrs Maite Beaumont. Meg Page. Not so with Ruth Iniesta and Nannetta, with a clean voice, fresh and voluminous that accompanied the diffident Fenton Joel Prieto, it costs to recover the good level he showed in The Magic Flute takes a couple of seasons in this same theater.

The doctor. Caius de Chritophe Mortagne was somewhat grotesque, with a somewhat forced his comedy broadcast.

Mikeldi Atxalandabaso is always a guarantee vocally and, especially, in the interpretation. It is a true chameleon on stage. On Bardolph, a bit tacky neighborhood, It was the most fun night. Valeriano showed the same trade Lanchas, Bardolph forays partner and Falstaff. With a bass that resonated with power and a very good performance.

Falstaff ends so masterfully Original, with a leak performed by all actors, including the choir (once again, magnificent), while a large mirror reflects the stalls while listening to "Everything in the world is mocking". In this case, we do not mind being teased.