The Indian Queen. The World on Stage 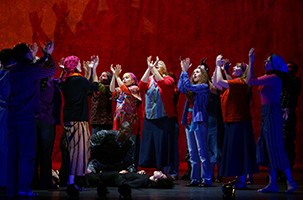 And finally it comes Purcell to the Royal Theater. It does so with one of his lesser-known works and represented, The Indian Queen. Y, as, surrounded by previous controversial. Especially by those who boast in the second or third production intentions. History decontextualise, ago the 500 years, like ago 70, It is a pending task for many.

It should be said that the audience of the premiere function has its own peculiarities. There are many occasions in which the final verdict is very different from the rest of the representations. And so it has also been on this occasion. The boos at the end of the first part of this show, applause turned into later performances. Is this a mystery that could be the object of study. From here I launch this hypothesis in case some curious are interested in the subject.

The Indian Queen is the last work of the English composer Henry Purcell in 1695. It is an unfinished work. The composer died frozen in the street one drunken night after his wife did not let him enter the house. It was his brother who was in charge of finishing it with an unfortunate Mozartian style.. Since then, there have been several occasions in which it has been tried to endow this work with another ending that has not always been the most successful.

But let's place ourselves before assessing the true proportionality of the new version of Peter Sellars. Purcell began his compositions at a very early age, with scarcely 15 years his first works were published and soon he began a brilliant professional career. The England of Purcell's early years was that of the time of the Puritans. Almost all artistic expressions were prohibited and theaters were closed. The young Purcell was then limited to compositions of a liturgical nature since the opera, as such, it was not yet known in England. It would be Handel who introduced the first Italian-style operas. With the monarchical restoration and the arrival to the throne of Carlos II, Theaters were reopened and cultural and social life returned to English cities. In this unprecedented situation, the demand for new cultural "products" was extraordinary. And Purcell's concerns for music, theater or dance, led him to make the first compositions. Thus are born the so-called semi-operas, musical dramas performed by supporting characters, often allegorical, while the main action is reported orally.

The Indian Queen, whose original score barely lasts 50 minutes, It is a semi-opera formed by the so-called masques or divertimentos that brings together poetry, music and complicated sets where dance and other artistic expressions have a place. The version that Peter Sellars has created after more than 25 of admiration and deepening in this work, has had a necessary collaborator, Teodor Currentzis. He coincided with him when they both rehearsed Iolanta and discovered their common passion for the English composer and for this particular work. The result responds almost millimetrically to the classic concept of semi-opera. With a duration of almost four hours after the incorporation of hymns and psalms by the composer himself, mostly liturgical, but perfectly embedded in the new literature of the work, providing dramatic balance and coherence. That dark and heartbreaking drama with which Purcell says goodbye to the world. Sellars has also transformed the original libretto with a rewriting commissioned for the occasion from Rosario Aguilar. Nicaraguan writer, author of "The white girl and the birds without skin". That white girl is Leonor, daughter of Teculihuatzin (Mrs. Luisa) and the conqueror Don Pedro de Alvarado. Both protagonists of the story.

The work begins with the dynamism of the dancers painting evolving in silence until the music begins. Dynamism that will be a constant in the work. As will the silences too, those evaluative silences that Sellars resorts to as a reflective element between interludes. The stage is simple and clean. Only the expressionist works of Gronk They dress the stage from side to side, filling each of the masks with strength and symbolism. The discreet and delicate lighting of James F. Ingalls gives life and movement to these immense canvases that in turn embellish with the effects of shadow games.

The group of dancers formed by Burr Johnson, Takemi Kitamura, Caitlin Scranton Y Paul Singh it is one of the different artistic planes that take place at the same time on stage. They have an extraordinary weight and prominence. American Christopher Williams, has created a current choreography, elegant and precise, based on baroque court dances and is performed with masterful brilliance by these four artists. Highlight Caitlin Scranton's exquisite movements.

The play is narrated by Leonor, the white girl, played by the Puerto Rican actress Maritxel Carrero. His presence is scene, discreet but emphatic, is presenting the interludes where women, conquerors and indigenous, they are the protagonists. Bringing the importance of women to the fore, always omitted by history, is one of the purposes of this work, granting them a mediating role between the conflicts that the male protagonists engage in. But so much narration is excessive and, despite perfectly understandable English, and a very good voice projection without any amplification. Much public ended up deserting the subtitles. The story tells of the tragedy that took place during the Spanish conquests in the New World, Sellars has focused on the drama of spiritual conquest. Stripping a people of their gods to force them to worship others. Argument in tune with the deeper questions that Purcell posed through his music, and that they make their way through the hymns and psalms chosen by Sellars to complete the work.

The cadre of young singers is headed by Jilia Bullock, who plays Queen Teculihuatzin or Doña Luisa, once christianized. With a physique and a presence very appropriate to the character, his long and consistent voice, accompanied at all times a very good dramatization. Very good in the final scenes of his illness and death, despite the slowness, on the brink of boredom, which at that time reached the work.

The Belarusian soprano Nadine Koutcher gave life to an extraordinary and serene Doña Isabel with a round and polished voice. Its "O solitude”, breathtaking drama and wonderful pianissimi in "See, even night herself is here”Which was moving.

The Korean countertenor Vince Yi, owner of an exotic and beautiful voice, impressed by its lightness in colorature and extraordinary highs. Did not accompany him, like most of the protagonists, costumes.

The other countertenor of the night, the French Christophe Dumaux as Ixbalanqué, performed some of the most moving pieces, performed with exquisite taste and dramatic timbre as in "Music for a while”.

The male leads, Markus Brutscher, as Don Pedrarias Dávila and Noah Stewart, Don Pedro de Alvarado, who only sings in the second part, are the least brilliant vocal elements of the production. Stewart did not go beyond the discretion and had difficulties in the emission if his position was not totally vertical. The military uniforms they wore and some beer scene, they faded a bit in the midst of so much scenic beauty.

Definitely, the most important voice of the night was that of the choir, MusicAeterna. Impeccable unity that can only be the product of constant and tireless work under the direction of its owner, Teodor Currentzis. There was no coldness, quite the opposite. The discipline at the service of the highest artistic expression. Always attentive to the entrances, to the silences, to a perfect rhythmic breathing. Powerful volume or growing inputs, and all this wrapped in the mystique of emotions.

Currentzis es, definitely, one of the fastest growing directors on the international scene and one of the most powerful batons. The dramatic tempo with which he led the orchestra and choir. The communication and knowledge that exists between him and the stable bodies of the Perm Opera, it is appreciated in every moment of the work. A neat and refined sound, full of emotional effects. The sound of the continuum, directed by Andrew Lawrence-King, and that of the archludes and the psalter. But the sound drawn from the lute and theorbo, creating a dark atmosphere, dramatic accompaniment to the psalms, centering the baroque character of the entire work and the feeling that Purcell put into it. A polished sound in its thick, that invited permanent recollection, to contained exaltation or, simply, to inner enthusiasm, the one with which it is transmitted.