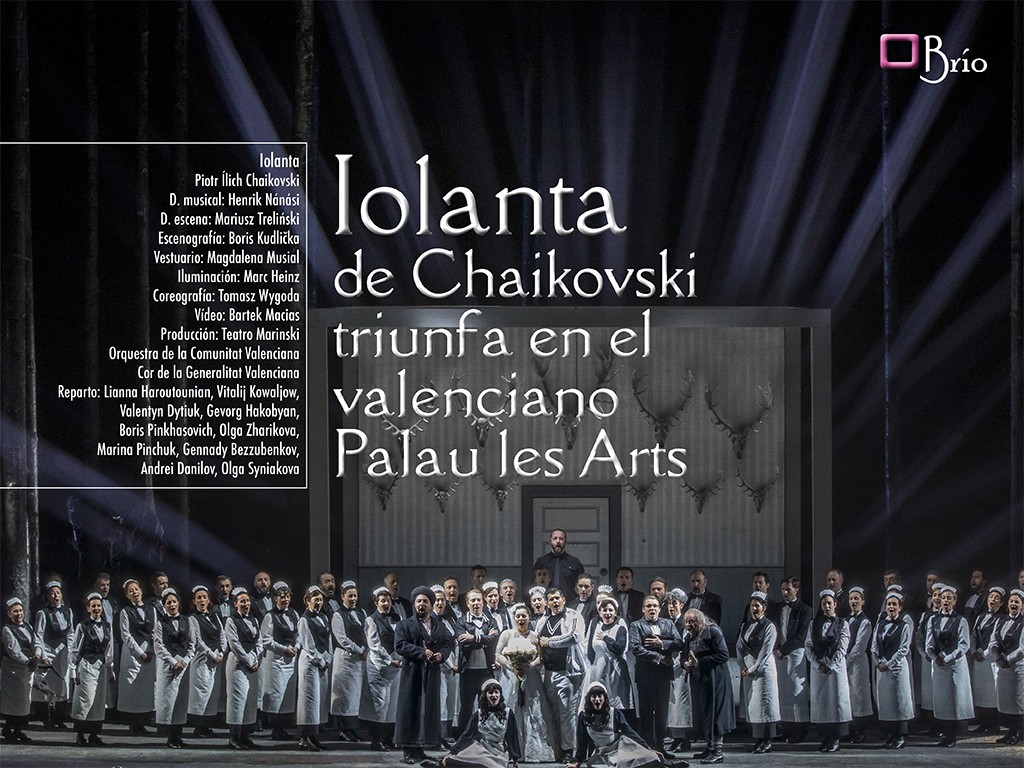 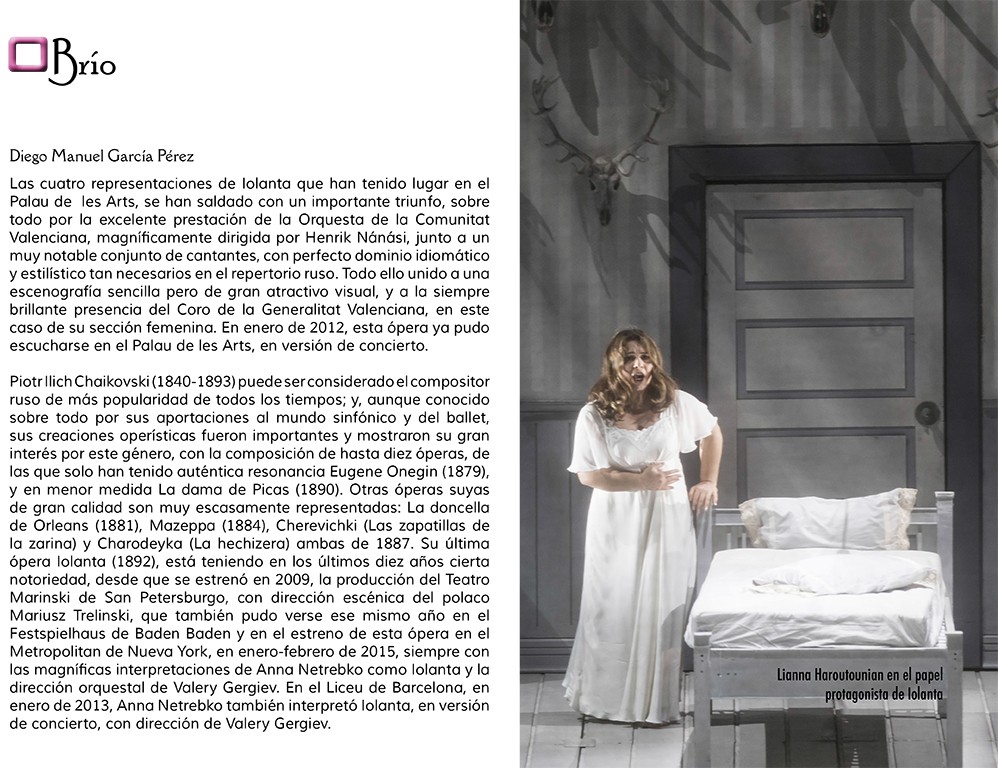 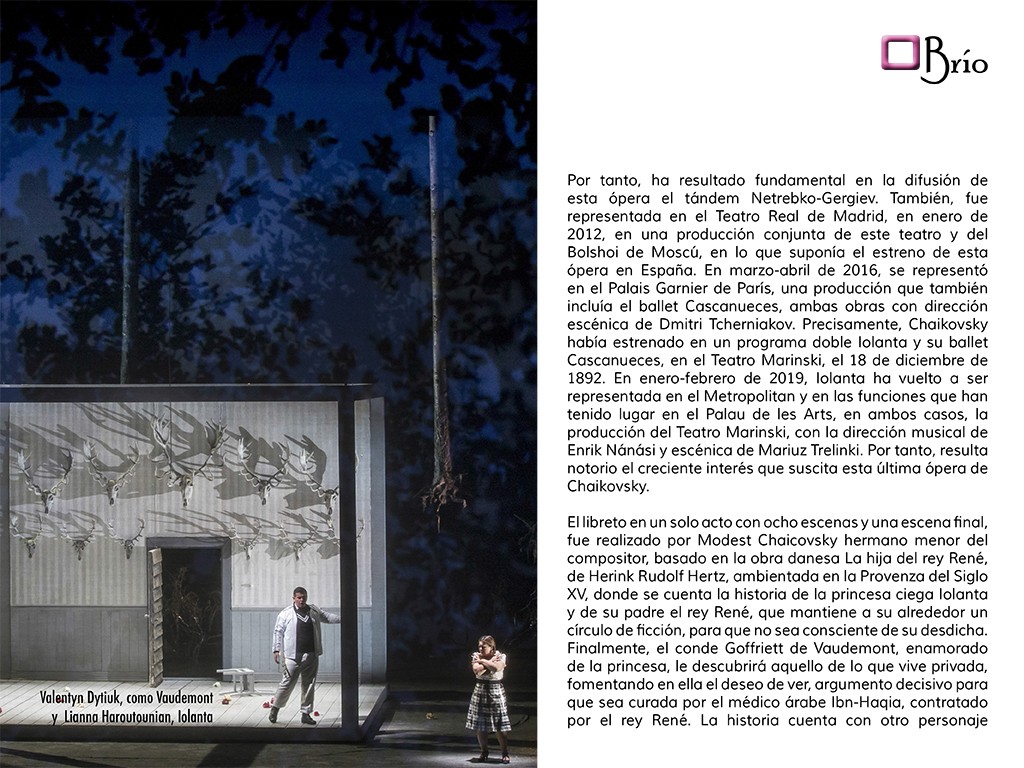 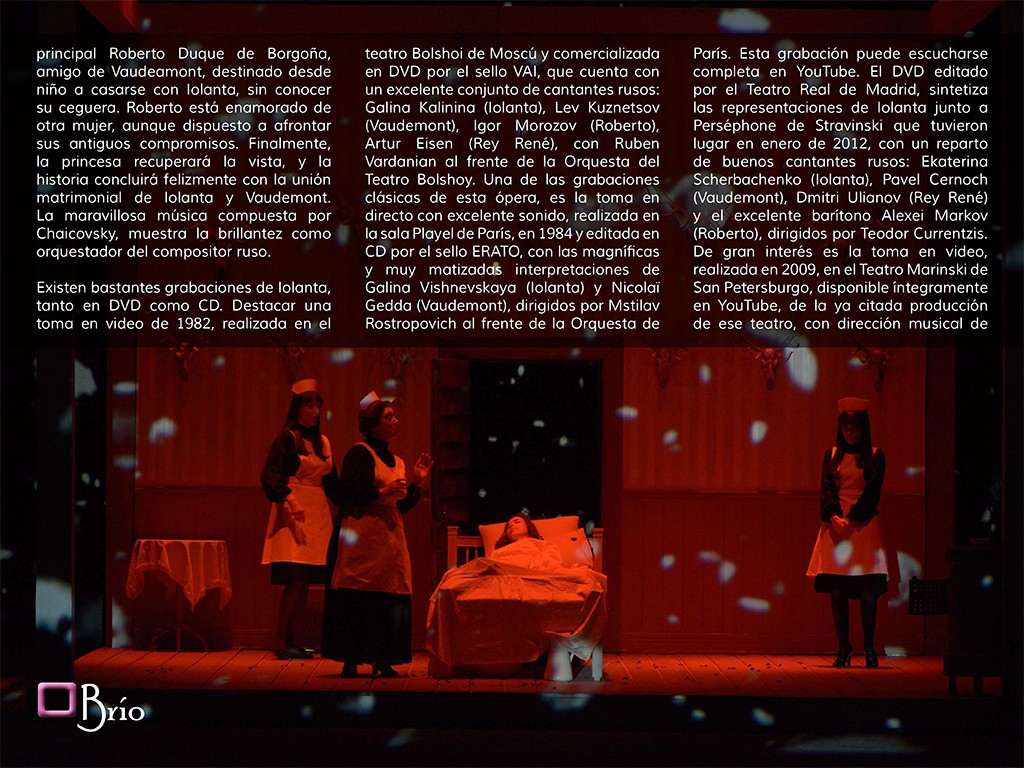 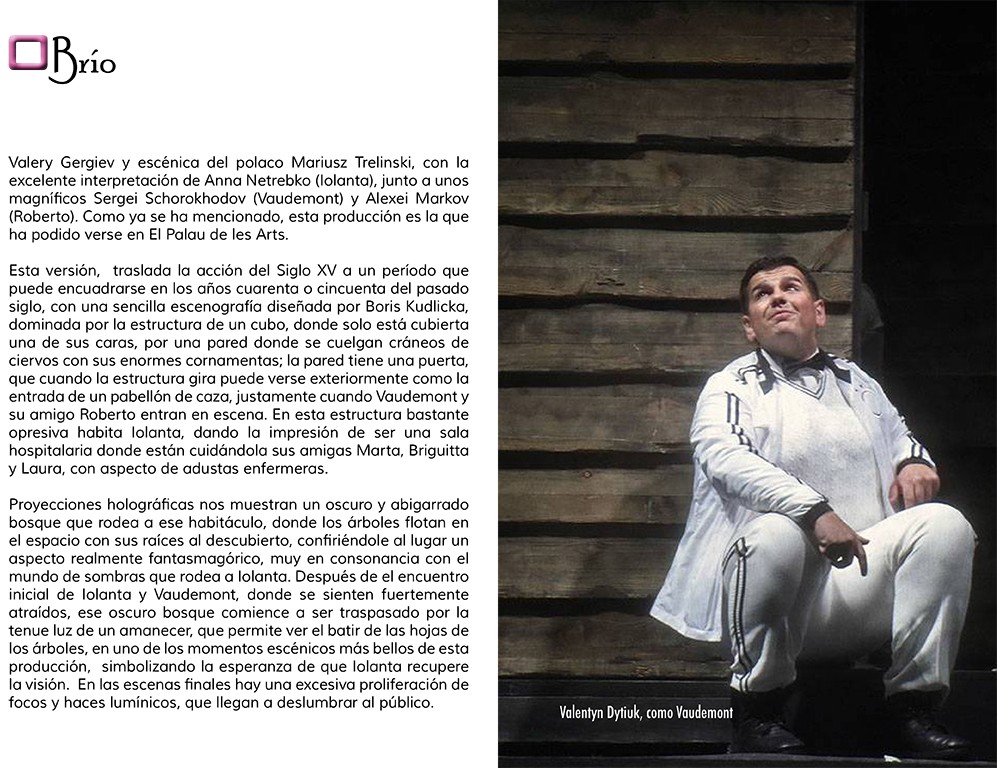 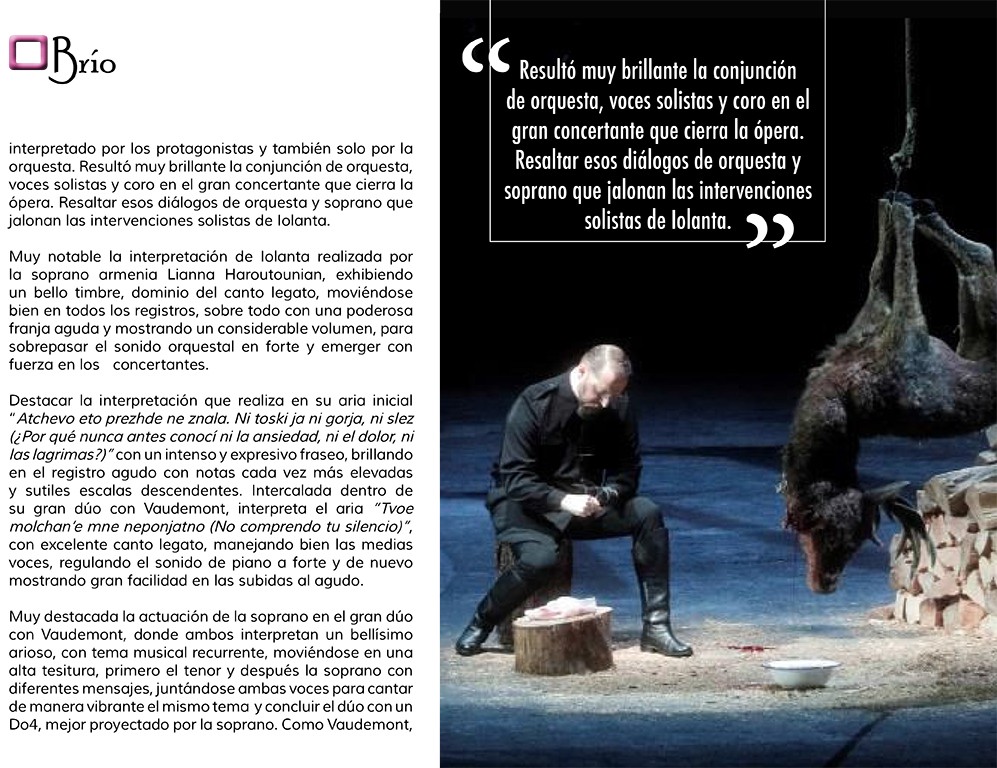 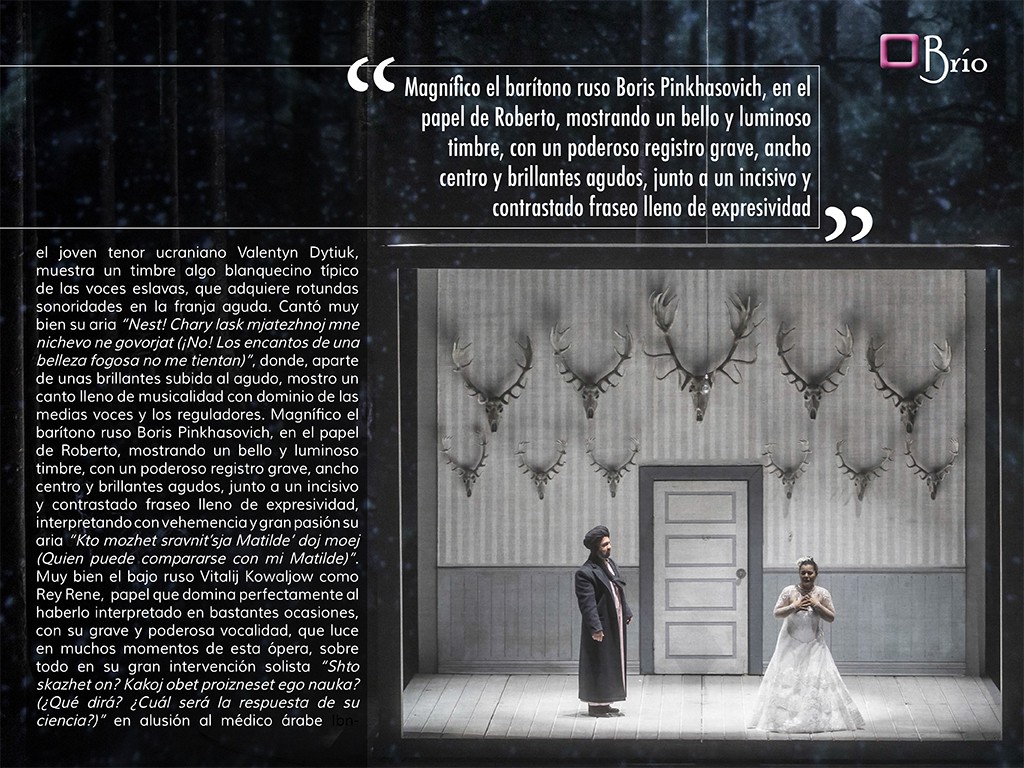 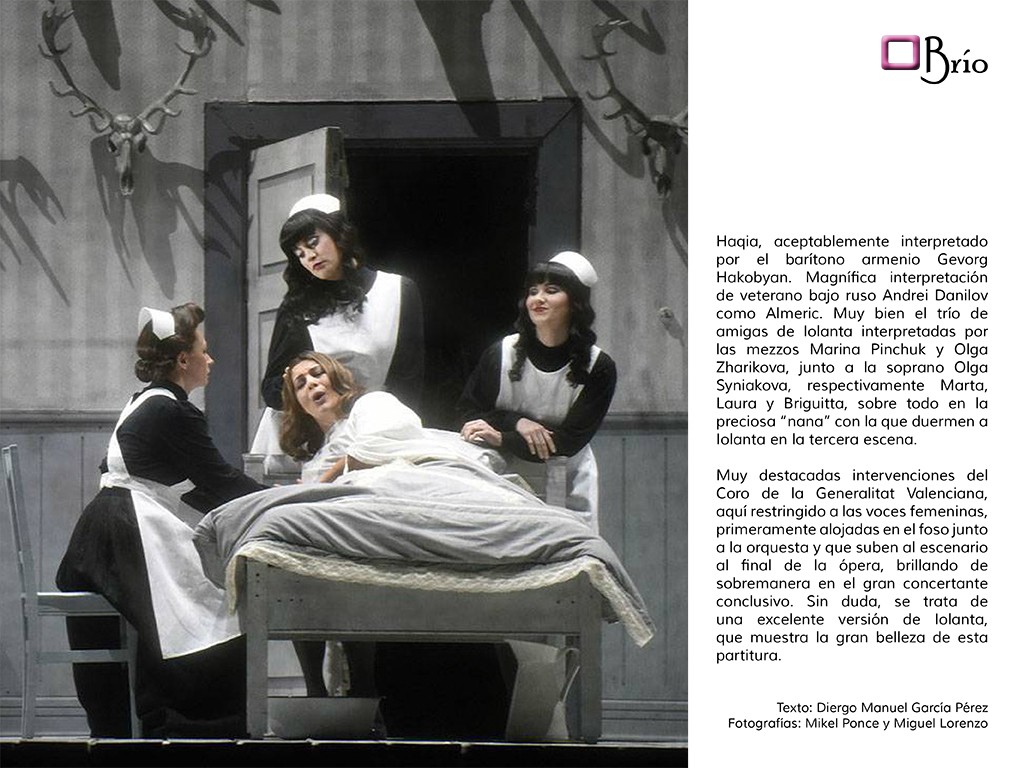 The four performances of Iolanta that have taken place in the Palau de les Arts, They have resulted in a major victory, especially by the excellent performance of the Orchestra of Valencia, superbly directed by Henrik Nánási, with a remarkable set of singers, with perfect idiomatic and stylistic mastery as required in the Russian repertoire. All this combined with a simple but very attractive scenery visual, and the presence of the always bright Choir Valencia, in this case the female section. In January 2012, this opera could already be heard at the Palau de les Arts, in concert.

Piotr Ilich Chaikovski (1840-1893) It can be considered the most Russian composer of all time popularity; Y, Although it is known primarily for its contributions to the symphonic world and ballet, his operatic creations were important and showed great interest in this genre, with the composition of up to ten operas, of those who have just had real resonance Eugene Onegin (1879), and to a lesser extent The Queen of Spades (1890). His other operas of great quality are very poorly represented: The Maid of Orleans (1881), Mazeppa (1884), Cherevichki (Tsarina's slippers) y Charodeyka (the hechizera) both of 1887. His last opera Iolanta (1892), He is having in the last ten years some notoriety, since it opened in 2009, the production of the Mariinsky Theater in St. Petersburg, with stage direction by the Polish Mariusz Trelinski, it could also be that same year at the Festspielhaus Baden Baden and the premiere of this opera at the Metropolitan New York, in January-February 2015, always with the magnificent performances of Anna Netrebko as Iolanta and orchestral direction of Valery Gergiev. Liceu in Barcelona, in January 2013, Anna Netrebko also sang Iolanta, in concert, direction of Valery Gergiev. So, It has been instrumental in spreading the tandem Netrebko opera-Gergiev. As well, It was performed at the Teatro Real in Madrid, in January 2012, in a joint production of the Bolshoi Theater and the Moscow, what he supposed the premiere of the opera in Spain. In March-April 2016, It was performed at the Palais Garnier in Paris, production also including the ballet Nutcracker, both works with stage direction by Dmitri Tcherniakov. Precisely, Chaikovsky was released in a double program Iolanta and her Nutcracker ballet, Mariinsky Theater in, he 18 December 1892. January-February 2019, Iolanta has again been represented in the Metropolitan and functions that have taken place in the Palau de les Arts, in both cases, the Mariinsky Theater production of the, with the musical direction of Enrik Nánási and Mariusz scenic Trelinki. So, Notorious is the growing interest in this last opera by Tchaikovsky.

The libretto in a single act with eight scenes and a final scene, It was conducted by Modest Chaicovsky younger brother of the composer, based on the work Danish King's daughter René, The Herink Rudolf Hertz, set in the Provence of the fifteenth century, where the story of the blind princess Iolanta and her father King Rene account, which holds around a circle of fiction, so you may not be aware of their misery. Finally, the Count of Vaudemont Goffriett, Princess love, you will discover that what private lives, encouraging her desire to see, clincher to be cured by the Arab physician Ibn-Haqia, hired by King René. The story has another main character Robert Duke of Burgundy, friend Vaudeamont, foreordained child to marry Iolanta, without knowing his blindness. Roberto is in love with another woman, although willing to face their old commitments. Finally, Princess recover sight, and the story will end happily with the marriage of Iolanta and Vaudemont. wonderful music composed by Chaicovsky, shows the brilliance as an orchestrator of the Russian composer.

There are many recordings of Iolanta, both DVD and CD. Highlight a take on video 1982, held at the Bolshoi Theater in Moscow and marketed by the label VAI DVD, which it has an excellent set of Russian singers: galina Kalinina (Iolanta), lev Kuznetsov (Vaudemont), Igor Morozov (Roberto), Artur Eisen (king René), Ruben Vardanian with at the front of the Bolshoy Theater Orchestra of the. One of the classic recordings of this opera, It is taking live with excellent sound, held in Paris Playel room, in 1984 and released on CD by the label ERATO, with magnificent and very nuanced interpretations of Galina Vishnevskaya (Iolanta) Nicolai Gedda the (Vaudemont), Mstilav Rostropovich led to the front of the Orchester de Paris. This recording can be heard complete on YouTube. The DVD published by the Teatro Real in Madrid, Iolanta synthesized representations with Perséphone Stravinsky held in January 2012, with a cast of good Russian singers: Ekaterina Scherbachenko (Iolanta), Pavel Cernoch (Vaudemont), Dmitri Ulianov (king René) and baritone Alexei Markov excellent (Roberto), led by Teodor Currentzis. Of great interest is making video, made in 2009, in the Mariinsky Theater in St. Petersburg, fully available on YouTube, of the aforementioned production of the theater, with musical direction of Valery Gergiev and stage of the Polish Mariusz Trelinski, with the excellent performance of Anna Netrebko (Iolanta), with magnificent Sergei Schorokhodov (Vaudemont) y Alexei Markov (Roberto). As it mentioned, this production is what has been seen in El Palau de les Arts.

This version, moves the action from the fifteenth century to a period that can fit in the forties or fifties of the last century, with a simple scenery designed by Boris Kudlicka, dominated by the structure of a cube, where it is only cover one side, a wall where deer skulls are hung with huge antlers; the wall has a door, when the structure turns can be input externally as a hunting lodge, just as Vaudemont and his friend Roberto come into play. In this structure quite oppressive lives Iolanta, giving the impression of a hospital room where her friends are watching over Marta, Briguitta and Laura, dour-looking nurses. Holographic projections show a mottled dark forest surrounding the passenger compartment, where trees floating in space with their roots bare, conferring to the place a truly ghostly, very much in keeping with the world of shadows surrounding Iolanta. After the initial meeting of Iolanta and Vaudemont, where strongly attracted, that dark forest begins to be pierced by the dim light of a sunrise, which lets you see the beat of the leaves of trees, one of the most beautiful scenic moments of this production, symbolizing the hope that Iolanta regain vision. In the final scenes there is excessive proliferation of lights and light beams, They are arriving to dazzle the public. The costumes designed by Magdalena Musial plays with the contrast of black and white colors, reflection of light and darkness that dominates this story. Ya, in the final scene, when the princess has regained sight, She appears wearing a bright dress, symbol of that radiant light, allowing you to see the real world. Highlight the stage direction of Mariusz Trelinski, who manages to extract the maximum of theatricality to the actions of each of the interpreters.

Dirección de excelente ENRI Nánási, with the magnificent performance of the Orchestra of Valencia. Hungarian director showed his knowledge of the score, knowing highlight the smallest details, While driving dynamics and intensities, with outstanding conciliatory work very aware of the voices, which in this case they were of sufficient volume to cross the barrier at times orchestral sound forte. It was bright orchestral intervention from the same opening, where only intervened instruments woodwind, highlighting the sound of the English horn and bassoon. Throughout the work include the magnificent performance of the string, already evident in the opening scene, gorgeous orchestration, which he highlights the sound of harps. Excellent speeches clarinet soloist at the scene and the concertmaster second violin in the long introduction of "nana" lovely ending with the third scene. The orchestra shone greatly in the great duo Iolanta and Vaudemont, especially in the recurring musical motif always related to light, it will reappear in the final scenes of the opera played by the protagonists and only by the orchestra. Was very bright conjunction conductor, solo voices and chorus in the great opera concertante closing. Highlight these dialogues orchestra and soprano solos that punctuate the Iolanta.

Very remarkable interpretation of Iolanta by Armenian soprano Lianna Haroutounian, displaying a beautiful timbre, domain of bound hand, moving well in all registers, especially with a powerful strip acute and showing a considerable volume, to surpass the orchestral sound in forte and emerge strongly in concertantes. Highlight the interpretation made in its initial aria "Atchevo eto ne prezhde znala. Neither I nor Toski mounts, ni slez (Why I never knew before or anxiety, nor pain, nor the tears?)"With an intense and expressive phrasing, glowing in the high register with increasingly higher notes and subtle scales down. Interspersed within his great duet with Vaudemont, interpreta el aria "Tvoe molchan'e mne neponjatno (I do not understand your silence)”, excelente associated with singing, While handling the voices stockings, regulating the sound of piano to forte and again showing great increases to ease acute. Very outstanding performance of the soprano in the great duet with Vaudemont, where both they interpret one arioso beautiful, with recurring musical theme, moving in a high tessitura, first tenor and soprano then with different messages, both voices coming together to sing so vibrant the same subject and conclude the duo with C4, Best projected by soprano. as Vaudemont, the young Ukrainian tenor Valentyn Dytiuk, shows a typical white timbre something Slavic voices, rotundas acquires sonorities in acute strip. He sang very well his aria "Nest! Chary lask mjatezhnoj mne nichevo ne govorjat (¡No! The charms of a fiery beauty not tempt me)”, where, apart from a brilliant rise to acute, mostro a song full of musicality with mastery of middle voices and regulators. Russian baritone Boris magnificent Pinkhasovich, in the role of Roberto, showing a beautiful and bright timbre, with a powerful registry grave, wide and bright treble center, with an incisive and full of expressive phrasing contrasted, playing with vehemence and passion his aria "Kto mozhet sravnit'sja Matilde 'doj MOEJ (Who can compare with my Matilda)”. Well the Russian bass Vitalij Kowaljow as King Rene, dominating role perfectly interpreted the I have on many occasions, with his deep, powerful vocalism, which looks at many moments of this opera, especially in his great solo intervention "Shto skazhet on? Kakoj promise proizneset ego doctrine? (What will he say? What will be the response of his science?)"Alluding to the Arab physician Ibn-Haqia, acceptably played by baritone Gevorg Hakobyan Armenian. Veteran magnificent performance under Russian Andrei Danilov as Almeric. Well the trio of friends from Iolanta performed by the mezzo-sopranos Olga Marina Pinchuk and Zharikova, with soprano Olga Syniakova, respectively Marta, Laura and Briguitta, especially in the "nana" lovely with a Iolanta sleeping in the third scene. Very prominent interventions of the Choir of the Generalitat Valenciana, Here restricted to female voices, first housed in the pit with the orchestra and the stage up to the end of the opera, shining greatly in the great conclusive concertante. Definitely, This is an excellent version of Iolanta, It is showing the beauty of this score.