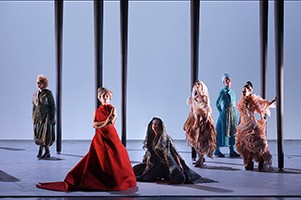 Besides the tastes, Each one has his own, can one approach this production seeing the glass half full or half empty. And this time there are arguments for both views. We will see…

If we stop taking into account that the work has been cut down to just one hour and twenty minutes; that the characters who do not sing have been dispensed with, although they appear in the original work; that the interpreters, except Maria Bayo, have no experience in baroque repertoire; the same goes for the orchestra, even with the director. If we really manage to ignore all this, it is, exclusively, in order to value the gallantry of daring to take the stage of the Teatro de la Zarzuela a play like this.

José de Nebra, one of the best composers of the Spanish Baroque is, to our shame, one of the most unknown. He was the composer of the music of many of the theater productions of Madrid of the time, before engaging in religious compositions.
Iphigenia in Thrace was released on 15 of January of 1747 at the Coliseum de la Cruz with the title As a gift to the deity, cruelty and Iphigenia is never cultured in Thrace, with the collaboration of the librettist Nicolás González Martínez, whose sources of inspiration were the works referring to the same historical event of Euripides Y Goethe.

And it is from these sources, from where the stage director Pablo Viar has extracted the texts that, as an introduction to each day, recites Iphigenia narrating the facts. The baroque structure of aria is maintained, recitative, aria. These narratives of Iphigenia, as an intimate dialogue, enhance the dramaturgy of the play.

On stage, the allegory of a forest and the brushstrokes hardly appear, almost in time, made by the teacher Frederic Amat. A large rose window is drawn as if the brush were another musical instrument. Lighting Albert Faura, creates a dreamlike world of shadows that enhance music and text. The changing room is in charge of Gabriela Salaberri who has created a leading element, almost the only one props of the work, that fills everything with color and animation.

The scenographic result is of great beauty, elegance and balance. Let music be the protagonist, accompanying her without distracting.
Another thing is the musical performance and the voices. At the presentation of Iphigenia in Thrace, director Francesc Prat wondered: what am I doing here?. And it's a good question. Lead with intention and pulse, but having been an assistant to Ivor Bolton when he was preparing some of the baroque works that he presented at the Real, does not seem sufficient background to address Nebra's work. It also doesn't help that the Titular Orchestra of the Teatro de la Zarzuela do not have plenty of experience in this repertoire. Yes they were noticed, providing solvency and baroque rigor, the reinforcements Cecilia Bercovich, concertino, Amat Santacana Y Aarón Zapico, bass continuous.

The voices are still far away, except for María Bayo, to be able to properly interpret a musical language like the one that makes up Nebra's score. These young young performers, excited about their participation in the play, They need something more than effervescence to carry out characters that require experience in the genre.

Maria Bayo, despite not being at his best vocal moment, make a difference on stage. Somewhat rigid in interpretation, but showing off their boards and experience. Preserves the beautiful timbre and a voice that has become more lyrical.

Erika Escribá-Astaburuaga, how Polidoro shone in his role and the tempo he set on stage. Ruth González, like Dircea, did not convince anyone. Very small voice and with an exaggerated vibrato.

The Chest of Lidia Vineyards-Curtis and backpack Mireia Pintó they put the most frivolous and fun note. Especially Vinyes-Curtis, who had a greater experience in this genre, especially in the acting part.

This Iphigenia in Thrace leaves much to be desired. Especially in the musical. But as Ruth González said, "Something is happening at the Teatro de la Zarzuela". And that is evident. Do not miss it.