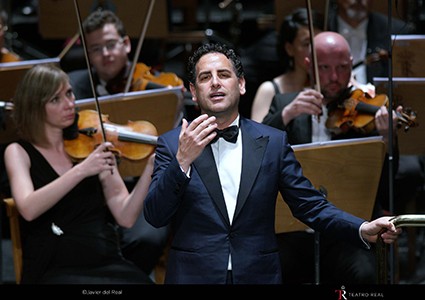 Last 13 June finally put this season cycle Real Voices. And he did it in style, with a recital by tenor Juan Diego Florez. lavishes not excessively Peruvian tenor, still less it does in operatic performances, and his last appearances at Real had not left a mark too deep.

Flórez has some vocal characteristics that can be addictive, at least for the vast majority of fans who filled the theater. And this time, You can say that Juan Diego Florez, he's back…

This time the repertoire was peppered with difficulties and composers who had not been addressed so far. He has lost the freshness and naturalness of its beginnings, In return, His voice is denser, continues to dominate anyone the agility and is very difficult to compete with their sharp. However, increasingly, You must compensate the center. He perfected almost to the end his breathing technique, as befits the heir of classical school Garcia. The result is a seamless ridge line, a well-defined bound and that beautiful, sunny timbre that is trademark.

No es Flórez a Mozart tenor, but this time I was surprised performing two arias full of difficulty, “I rely completely on your strength ", from The Entfübrung from the Seraglio (The Abduction from the Seraglio) Y "I'm going to meet the ultimate fate", from Mitriadate, re di Ponto. Both showed his extraordinary facility for agility. Too bad that his relationship with the German language subtract brilliance in the fraseo.

The first part ended with "What do I hear? Alas ... Ah, why does not he heard ", de Othello, an elegant and spirited aria with numerous sharp.

After the break, He continued with three works Leoncavallo, including the beautiful Morning. He followed with Puccini and the "You are wrong ... Florence is like a tree florito", de Gianni Schicchi, where exquisite phrasing completed a magnificent dramatization of this character who commends himself.

The other surprise came with the also puccuniana La Bohème, in which he played "How cold your little hand", transparent and easy issuance, and seemingly effortless elegance that remained until the end do chest.

To end, Verdi, two R ary lombardi and Traviata. From the first "My joy ... How could an angel", delicate and nuanced. De La traviata "Lunge from her ... hot De'miei spirits ... O my remorse", which he repeated at the end do not be satisfied with the first.

Once they concluded the recital came the numerous encores. He appeared with guitar, something that has already become a tradition and that the public held, for who it is. "Contigo Peru", "I only ask God" and "Cucurrucucú Paloma" were chosen, once again.

He finished with essential do breast Daughter of the Regiment from Donizetti and Granada, Agustin Lara, who they put the finishing touch and the public standing.