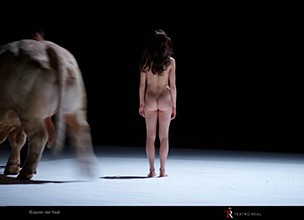 He Teatro Real decided to dedicate the second part of his season to a single common thread that runs between the Between Wars period and the effect it had on the artistic expression of those who suffered it. One of these protagonists was the composer Arnold Schoenberg what, influenced by the persecution of the Jews, He decided to embrace the beliefs of their ancestors. For this he took as inspiration the Book of Exodus of the Bible and put the most complex music that had been written up to that moment. Creating "Moses and Aron".

An always unsatisfied Schönberg, determined to find new systems of expression and creator of twelve-tone, composed a work with the freedom of those who do not feel committed to conventions, nor subject to orders or times. A work not intended for a premiere but for one's own delight and experimentation.
The result is a devilish and lofty score, but also unfinished, because the music of the third act was pending.

Schönberg's need to discover new forms of expression, it should, maybe, to the difficulties that an artist always finds to express himself. These difficulties may be an autobiographical note. In his early days he was a romantic composer, before reaching twelve-tone as a natural conclusion of his musical development.

It was the first time that Schönberg's work, Moses and Aaron, was performed at the Teatro Real. We will not take into consideration the concert version that was offered in 2012 under the direction of Sylvan Cambreling.

I can't tell if Moses and Aaron is unfinished or, simply, it's endless. Romeo Castellucci puts us on the trail of this possibility, that has taken as a reference to create the scenography that third act that musically does not exist.

The clever proposal of Castellucci, that delves into the most intellectual aspects of the work, places the word and its concept at its epicenter. Both as a paradigm of communication and, especially, its difficulties and the risks involved in the misuse of communication and images. As a metaphorical example of these difficulties, serve the effect produced by the projection on the canvas that covers the scene of words that acquire such speed that they force to look away. Some concepts raised in the work, remember based on the Old Testament, son, Besides, of an astonishing actuality, as "town", "Exodus", those periodic migrations in search of promised lands, "idolatry", even "desert".
The scenography is of undeniable plasticity. During the first part, a white chiffon backdrop creates a snowy atmosphere, of emptiness and silence, after which the silhouettes of the choir are barely sensed while singing "your God cannot make us visible". In a perfect symbology of the desert as a condition of human experience.

The baton Lothar Koenigs is the key in all this production. Your ability to interpret those rhythms of interval melodies, where the hierarchy does not exist and each note is independent of the one next to it. It is absolutely enlightening. His deep knowledge of the score and what inspires it, puts the accent on music, and not what is behind, as was the wish of Schönberg himself. The musical performance you get from the orchestra, the expressiveness that achieves, both the orchestra and the choir, are undoubtedly the great secret of the success of this production.

The German Bass Baritone Albert Dohmen composes a somewhat severe Moses, obsessed with his own responsibility and impeccable timbre. Fantastically handled that spoken song that is the Sprechgesang.

Totally opposite is the character of Aaron, played by the British tenor John Graham-Hall. His character is much more complacent and speculative. With a somewhat strident voice and at some point unpleasant, but necessary to represent a fundamentally superficial Aaron.

Along with these two main characters is the third protagonist, the people of Israel, Interpreted by the Titular Choir of the Theater, under the direction of teacher Andrés Máspero. 12 months of testing have led to these more than 80 components to face the most demonic score that has been written for voice in an outstanding way. Still knowing the twelve-tone scale, I felt unable to reproduce a single note of what I had just heard, given the great complexity of this score. The quality of this chorus is well above that of the aforementioned version of 2012, interpreted, by the way, by a foreign choir. His lengthy speeches were approached with accuracy and courage. Diction, impeccable.

The fact that a twelve-tone opera does not leave the audience shocked and excited, It is without a doubt a point that the Theater should score and who during this season has surprised, very pleasantly, with some unexpected titles. Attend the opera and the successful side activities, for something else to enjoy, must be the goal of any theater. And the Royal Theater is hitting that line.