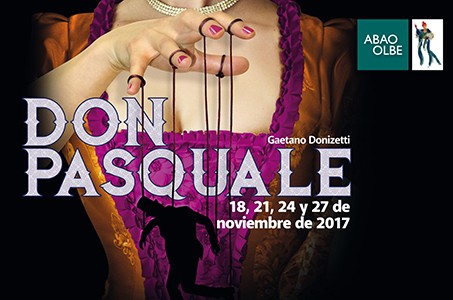 ABAO-OLBE (Bilbao Association of Friends of the Opera) recovered for the fourth time in its history, more than two decades after his last performance at the Coliseo Albia, Don Pasquale from Donizetti. The following days 18, 21, 24 Y 27 of November, sponsored by the Department of Culture and Language Policy of the Basque Government, up on stage this title, the last of the great Italian opera buffa inspired art commedy moving halfway between the past and the future.

Donizetti opera searches a critique of social mores as weft thread; for it devises a comedy centered on four characters: the dominant, foolish and cantankerous Don Pasquale, lovers: Ernesto naive and cunning Norina, and Doctor Malatesta in the traditional role of mediator and accomplice of intrigue. It is a comedy distinguished, articulated well, full of emotion and feeling in which comic and lyrical scenes unfold, extravagant and tender, reviews and intimate with an elegant combination of arias, duos and set numbers. To give life to the protagonists of this title must have high voices and good performing powers to interpret naturalness and elegance without falling into the grotesque or caricature, ABAO-OLBE has assembled a cast led by the low-baritone Carlos Chausson, who returns to Bilbao to give voice to 'Don Pasquale', a role that in the last Biso representation 1995 at the Coliseo Albia. Rounding out the cast soprano Jessica Pratt as 'Norina', the debut of young lyrical tenor Santiago Ballerini as 'Ernesto', baritone Javier Franco como 'Dr. Malatesta' y Javier Campo as 'Notary'

The musical part is in charge of teacher Roberto Abbado, ABAO awaited debut in one of the most sought after conductors on the international scene who led Alfredo Kraus as 'Ernesto' in Don Pasquale at La Scala in Milan and a recording of this title for Sony considered absolute reference. Abbado has qualified Don Pasquale as "more balanced and perfect the work of Donizetti". The choral part is once again task Bilbao Opera Choir, with Boris Dujin in front.

On stage an impressive production from the Maggio Musicale Fiorentino conceived by Jonathan Miller recreating a giant German dolls house late seventeenth century, with compartmentalized spaces in a large scenic solution, witty, witty, original and full of movement. also it is known for the profusion of details, atrezzo rich period costumes designed by Isabella Bywater.

Representation Don Pasquale of the 27 of November, hosts the closing ceremony of the third edition of Fair Saturday, a day to change the world through culture. ABAO-OLBE, as the driving entity of this movement, He collaborates on this occasion with a special action aimed at young people up 25 years may attend the representation with a flat rate of 15 €. ABAO-OLBE will transfer the collection of these solidarity entrances to the social work of Foundation ADSIS.

Adsis Foundation is a non profit organization that for more than 50 year struggle to build a fairer society, caring and inclusive. They work from the closeness and accompaniment, committed to the most vulnerable people to achieve develop their life projects. Annually serving more than 22.000 people through 7 social action programs 12 provinces. further, its programs of development cooperation and fair trade support more than 150.000 people (between direct and indirect population) in three Latin American countries.

ABAO-OLBE ADSIS Foundation shares with the aim of working for a more just and participatory society and contributes to this action to promote social inclusion through culture and opera, opportunity to change inequality.

In order to analyze, in advance the premiere, the most important aspects of this opera of Donizetti, ABAO-OLBE has organized a conference, Free entrance until full capacity, For friday 17 November in the Auditorium of the Museum of Fine Arts (entrance door by Chillida) to 19.15 hours. This time will be Alvaro del Amo, Law degree from the University of Madrid, and Address by the Official School of Cinematography. He works as a theater and film critic in the most important cultural magazines and Spanish newspapers and opera critic for the newspaper El Mundo. Storyteller, author of storybooks, essayist and playwright, in the latter genre considered as part of the current formal vanguardismo, It is also well known in its facets of screenwriter (short and feature films) and film and theater director. as narrator, It begins with Mutis (1980). Other works include Libretto (1985), Contagion (1991), The saddest story (Herralde prize 1991) The horror (Herralde award finalist 1993), Glow (1998) and Music lovers (2000). He was also a screenwriter of the film "Lovers", Vicente Aranda.