Music at the Royal Theater, from the Royal Palace 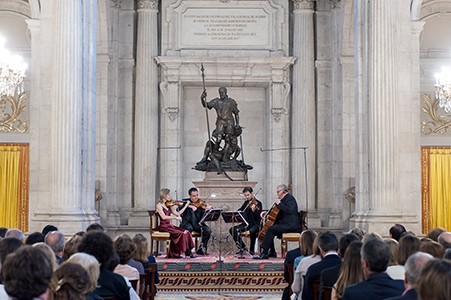 The Royal Theater and National Heritage continue their common collaborative project, with who want to publicize their artistic richness and cultural activities, so that they are more accessible to locals, tourists visiting the city and, hereinafter, in virtual form, Digital access to Palco (www.palcodigital.com), Teatro Real audiovisual portal.

Under a cooperation agreement, the Royal Theater recorded and distributed free concerts Cycle Chamber Music, They are taking place in the Hall of Columns of the Royal Palace, and Organ Cycle held in the Palace Chapel and the Royal Monastery of the Incarnation.

From Thursday 26 of April, Digital Palco have free access for all users who want to enjoy the concert held last March in the Hall of Columns, offered by the Brentano Quartet and Stradivarius from the Royal Collection. The program included the Madrigals of Carlo Gesualdo; Quartet No.. 49 in B minor, on. 64/2 Hob. III:68, from Franz Joseph Haydn; From the Fifth Book, from Stephen Hartke; and Quartet No.. 4 in the lower, on. 18/4, from Ludwig van Beethoven.

This initiative adds to the launch last January the joint visit, which allows access to a single entry into the Royal Theater and the Royal Palace, with significant received by the public.

The Royal Theater and National Heritage signed in April 2016, year began the bicentennial of the foundation and 20 anniversary of the reopening of the Teatro, a framework cooperation agreement to strengthen the development and promotion of cultural activities through joint actions.