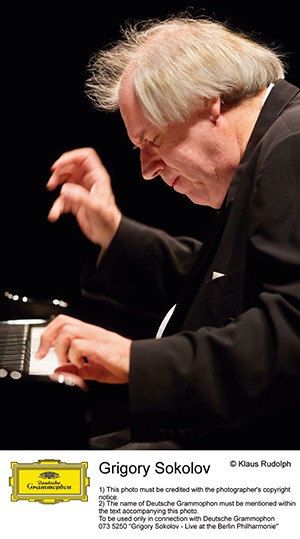 Since its debut in 1996, Russian pianist Grigory Sokolov It has been one of the most faithful artists to Great Performers cycle organized by the Scherzo Foundation. Only three times has missed this appointment and already totals 20 recitals to the public of Great Performers. The next 26 February returns to the stage of National Auditorium with a recital of works by F. J. Haydn y F. Schubert, to which he has dedicated several of his albums. The concert will pay tribute to writer, critic and editor Javier Alfaya, president of the Scherzo Foundation and promoter of his musical cycle, who died last 29 from January.

Sokolov was born in St. Petersburg (then Leningrad) in 1950. There he studied music at the conservatory and gave his first recital at the 12 years. With only 16 He won the International Tchaikovsky Competition in Moscow and his candidacy was defended by jury president, Emil Gilels. However, while previous winners in this contest quickly achieved worldwide fame, Sokolov's trip was restricted. Other Soviet artists fled to the West in search of greater personal freedom, but the interpreter preferred to stay in Leningrad to focus on his art. Only after the fall of the Berlin Wall began to enjoy wider international recognition.

He has worked with orchestras such as the Concertgebouw in Amsterdam, New York Philharmonic, Munich Philharmonic, Vienna Symphony, Montreal Symphony, Orchestra of the Teatro alla Scala and Philharmonics Moscow and St. Petersburg. A few years ago he decided to devote himself exclusively to recitals. A) Yes, He performs regularly at the Vienna Konzerthaus, la Philharmonie of Berlín, el Théâtre des Champs Elysees París, Zurich Tonhalle, the Philharmonia Warsaw, the Auditorio Nacional in Madrid, the Milan Conservatory, the Academy of Santa Cecilia in Rome, La Fenice in Venice; as well as rooms Munich, Hamburg, Barcelona, Stockholm, Helsinki, Lisboa, Luxembourg, el Festival Piano, Colmar Festival and the Festival of La Roque d'Anthéron, among other.

Sokolov there artista exclusivo del sello German Grammophon. It debuted on this label in 2015 with his Salzburg Recital, which he was a great success and became the best selling album of classical music that season. His latest album as recital, published in January 2016, contains some of the last pieces of Schubert, Like the Impromptus, or the mighty Beethoven sonata, Hammerklavier. In 2017 launched another with the Mahler Chamber Orchestra in which it includes concert number 23 Mozart and Third Rachmaninov.

He has performed in 20 Cycle times in the Great Performers, making each one of the sublime concert calendar appointments and most eagerly awaited by the public and critics. This will be the second concert of the 23rd season of Great Performers cycle after the inauguration of Mitsuko Uchida last January. The nine concerts scheduled to take place between January and December 2018. further, Gustavo Dudamel, which garnered a huge, resounding success in the previous season- returns to the cycle with an extraordinary concert in front of the Mahler Chamber Orchestra. Along the 2018, experienced pianists, as Uchida, Sokolov, Radu Lupu a Murray Perahia, They will share the stage with young and prominent artists as Yuja Wang, Benjamin Grosvernor o Jan Lisiecki.

The ticket price is set from the 25 euros. Young people under 26 years may attend concerts 10 euros going to the National Auditorium box office half an hour before the start of the concert. Throughout more than two decades of life of this cycle sponsored by The country and the Cadena Ser, They have acted almost a hundred pianists in more than 200 concerts. These figures have become one of the best in their specialty cycles at European level.