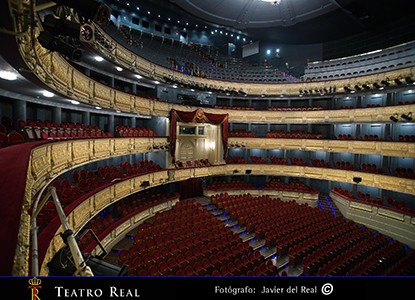 Coinciding with the anniversary, the next 23 April will be delivered the first Medals Teatro Real the presidents and CEOs of the institution since its reopening, as a tribute to his work and dedication and recognition of his contribution to the Royal Theater.

Likewise, associated with this special day, Royal Theater launches today for sale 200 tickets 20 euros, in the best areas of your living, three functions Gloriana: 22, 23 Y 24 of April. localities, for audiences of all ages, They can be purchased at the theater box office.

He 21 April's draw will be held the last of 9 tenths of lotteries dedicated to the bicentenary of the Royal Theater.

He 23 April 1818, under the tutelage of King Ferdinand VII, They kicked off the works of the Royal Theater, directed by architect Antonio López Aguado (1764-1831), as reflected in the founding documents of Theater. To celebrate this symbolic day, integrated in the celebrations of Bicentenary of the Royal Theatre that began in 2016, They will be delivered first Medals Teatro Real, which throughout the year will be awarded to personalities and institutions for their contribution to the Royal Theater and the world of opera.

The next 23 April the first medals will be presented to the presidents and CEOs of the Royal Theater since it reopened, in recognition of his work and dedication to the institution. The event will be held at a later dinner function Gloriana, Benjamin Britten, in which they participate, Besides, representatives institutional bodies of the theater.

With a nod to the two commemorative dates -the 20 anniversary of the reopening of the Royal, he 11 October 1997, and the 200 years of laying the first stone of the building, he 23 April 1818- the Royal Theater launches today for sale 200 localities 20 euros, in the best areas of your living (which is more than one 90% off), three functions Gloriana: 22, 23 Y 24 of April. localities, for audiences of all ages, only they can be purchased at the theater box office.

DEDICATED TO THE BICENTENNIAL OF THE ROYAL THEATER

In the field of events commemorating the bicentenary of the Royal Theater, State Lotteries has issued, from the past 14 May 2016, 9 the 10th dedicated celebration of the anniversary, with a chronological journey through the history of the Royal Theater through different images of your building, from a lithography 1853 until recent photos 2017 (See attached file).

Culminating this series, the tenth of the National Lottery draw next Saturday, 21 of April, which shall divide 42 millions of euros prize, It will be the last dedicated to 200 years of the Royal Theater.