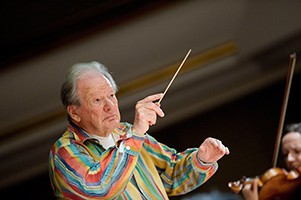 The Cadaqués Orchestra will honor Sir Neville Marriner at a concert in memoriam the next 20 October within the 47th season Ibermúsica. The principal guest conductor of this group from 1992, He died in London on Sunday 2 October, to the 92 year old. Marriner was to be in charge of leading the prestigious Catalan group in its second concert scheduled for Ibermúsica, with whom he had already acted in 55 times since its introduction in 1973. Jaime Martin, conductor of the orchestra, its successor will be in front of it.

Cadaqués Orchestra will give the first of two performances for Ibermúsica - his twentieth participation in the cycle - Monday 10 October. It will be the world premiere of Three Velázquez paintings, work of the composer Jesús Torres, AEOS prize winner - BBVA Foundation. This is the latest creation of the author and reflects the commitment of Ibermúsica open to new compositions in programming. With this work are now eight world premieres and 138 in Spain which they have taken place in the cycle since this was launched.

Neville Marriner studied the violin at the Royal College of Music and the Paris Conservatoire. In 1949 he joined the Martin String Quartet and founded the Jacobean Ensemble with Thurston Dart harpsichordist, and the Virtuoso String Trio. He was part of several orchestras as a violinist London, which gave him the opportunity to work with legendary directors like Toscanini, Furtwängler, Cantelli y Karajan.

While a member of the London Symphony Orchestra, in 1959, he founded the Academy of St. Martin-in-the-Fields, of which he was concertmaster and later conductor. Pierre Monteux became his mentor and his first job as a director was with the Chamber Orchestra of Los Angeles 1969-1979. Later he became music director of the Minnesota Orchestra up 1986, year I got this same position in the Stuttgart Radio Symphony Orchestra.

Sir Neville Marriner has been awarded twice for his work done in pro music: in 1979 He was named Commander of the Order of the British Empire and 1985 He received the honorary title “Sir”. La Academy of St. Martin-in-the-Fields and Sir Neville received the Queen’s Award for Export Achievement in recognition of his achievements in the field of international concerts and recordings.

Sir Neville Marriner is the Principal Guest Conductor of the Cadaqués Orchestra since 1992, with which he has toured, including their 90 Anniversary by Spain and Germany in May 2014.

The training will be accompanied by the mezzo soprano Russian Olga Borodina and will act under the orders of Vasily Petrenko. Rounding out the magnificent program compositions Songs and Dances of Death, from M. Mussorgsky; Y Suite No.. 4 in G Major, op.61 “Mozartiana”, from P. I. Chaikovski. Cadaqués Orchestra will return to the scene of the National Music Auditorium 20 October with two works L. V. Beethoven, Violin Concerto, on. 61 Y symphony No.. 2 in D major, on. 36, overture and ballet “Alphonse et Leonore” from Ferran Sor. In this tribute to Marriner, the violinist Augustin Hadelich, recent Grammy Award, solo act.

Cadaqués Orchestra is one of the few Spanish formations whose artistic level is at the height of the great European orchestras and this time, It is presented on stage at the National Auditorium with Vasily Petrenko, current director of the Royal Liverpool Philharmonic and the Oslo Philharmonic Orchestra, y Olga Borodina, star of the legendary Mariinsky Theatre in St. Petersburg. As well as Augustin Hadelich, whose talent has been highlighted with the last Grammy Award for Best Instrumental Soloist Classic; and Jaime Martin, renowned flute performer and conductor.

Sir Neville Marriner (Lincoln, 1924 - London, 2016) It has been regarded as a giant of classical music. For his talent, sense of humor and determination, He became one of the most prominent directors in recent years. He began his career as a violinist and was a member of the London Symphony. In 1959 fundó la Academy of St Martin in the Fields, of which he was concertmaster and later Chief Conductor. He participated in the soundtrack of the film Amadeus Milos Forman. Thanks to his work for classical music (and his prolific career over 600 recordings) He received numerous awards. Between 1973 Y 2014 the prestigious director acted in 55 sometimes with Ibermúsica.

On the other hand, the composer Jesús Torres concluded in 2015 Three Velázquez paintings, premiering the piece Cadaqués Orchestra. As its name suggests, the work is based on three paintings of the Baroque painter Diego Velázquez. The first movement is dedicated to The Rokeby Venus, in which reflected "Poetry and sensuality of the image", in the words of composer; the second movement is about the Christ crucified; and the finale is inspired by The Triumph of Bacchus.

The 47th season Ibermúsica, in which these two performances fall, started last 24 June with the opening concert of the Vienna Philharmonic. Since then, and until May 2017, Programmed Ibermúsica 25 concerts 12 of the best orchestras in the world.

Mussorgsky Songs and Dances of Death