Susan Graham, a voice to Mahler 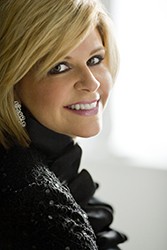 He Teatro Real will offer tomorrow, Thursday 22 of May, a new session of the series Real Nights what, this time, It will feature one of the leading mezzo-sopranos of recent times, Susan Graham, who will perform Songs of a Wayfarer (Songs of a wayfarer), from Gustav Mahler, accompanied by Head of the Royal Theatre Orchestra, under the direction of teacher Tomas Hanus.

The evening program is completed with the Symphony No. 4 in F minor, on. 36, de Piotr Ilich Chaikovski.

The versatility of the voice of the American singer, he has become one of the most popular names in the major opera houses of the world. His repertoire includes main characters, from Baroque to contemporary works, and his recitals are a reference for all fans. Madrid public has had the opportunity to hear in the Lied Cycle Teatro de la Zarzuela (2004) and the splendid production Iphigenia in Tauris, de Christoph Willibald Gluck, conceived by Robert Carsen, at the Theatre Royal (2011), and in which he shared the stage with Placido Domingo Y Paul Groves.

The meeting tonight will take place at 20.00 hours in the main hall of the theater.