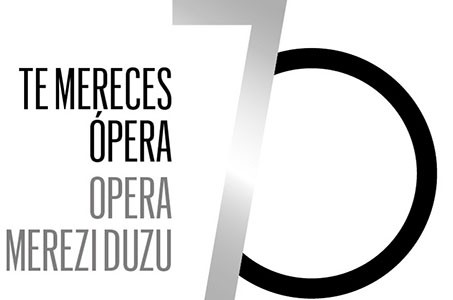 ABAO Bilbao Opera will start your new season 2021-2022 in October, welcoming all its partners, collaborating companies and institutions and amateur public.

He new lyrical course will begin by adjusting to the sanitary guidelines of the Bizi Berri plan at the level 2, that maintain the reduced capacity at cultural events indoors in 800 locations in the Euskalduna Bilbao, Y 600 at the Arriaga Theater, in addition to the obligation to keep social distance and the use of a mask at all times. These restrictions may be modified in the near future depending on the evolution of the pandemic.

He Saturday 9 October to 19:00h in the Euskalduna Bilbao, The programming of cultural activities will begin with the debut in Bilbao of one of the most prominent voices on the international lyrical scene, the sensational South African soprano Pretty Yende, whose career has reached the highest levels in the world of opera at an unprecedented speed in recent years.

Acclaimed by the public and critics for the lyrical colorature of his voice, his stage presence and his great personality, He has performed in the most important opera houses and is currently succeeding at the Wiener Staatsoper, where he has set the public on its feet from the first moment.

The exclusive program that will interpret in ABAO accompanied by the teacher Michele d’Elia, includes pieces of Bellini, Rossini, Donizetti Y Liszt, and will end with the demanding and exhausting final scene of the opera La sonnambula Bellini. The complete program can be consulted on the ABAO website.

Tickets are already on sale for members of the 13 al 19 September at a single price of € 40, and for the amateur public from that date at a price of € 60. Young people up 35 years have a reduced rate of 20 and € 30 respectively.

He Saturday 23 October, an extraordinary opera season will begin, with an ambitious schedule, full of premieres and of the highest artistic quality, with French repertoire, German and Italian, what includes eight titles, four of them in double program, plus a concert which adds two more new titles to the Association's catalog.

The Tales of Hoffmann from Offenbach, a romantic and exquisite opera, will open the season after two decades of absence from ABAO Bilbao Opera, sponsored by the BBVA Foundation.

The production is a premiere on the lyrical circuit from Spain and is signed by the "enfant terrible" of the current scene, Vincent Huguet, that presents a classicist proposal, imposing and modular.

In the musical section the teacher Carlo Montanaro will conduct a fast-paced and complex score, that respects the original spirit with which Offenbach composed it.

The cast will be made up of the great voices of Michel Fabiano who will play the troubled Hoffmann in a grueling role; Jessica Pratt who will tackle a true “tour de force” by playing the four main roles for soprano; Simón Orfithe one who will play Los 4 villains, elena Zhidkova with three roles, Y Mikeldi Atxalandabaso, Jose Manuel Diaz, Moses Marin Y Fernando Latorre. A challenge for the interpreters who will also have to assume the complex psychological profile of their characters.

Due to the current capacity limitation to 800 locations, the Association has scheduled a fifth additional function for him 27 October. In this way the representations will take place on Saturday 23 (inaugural function), Monday 25, on Wednesday 27, on Friday 29 October and Monday 1 of November.

This capacity restriction makes it difficult and limits for the Association to put tickets on sale to the amateur public.. Trusting that limitations will soon be removed and capacity will increase, ABAO has postponed the sale of single tickets until 27 of September. They can be purchased through the usual sales channels of the Association: in the offices, on its website and at the Euskalduna Bilbao box office.

He Saturday 16 October The toy box inaugurates the 17 temporada ABAO Txiki at Arriaga theater. A musical tale full of tenderness and humor for the whole family with music by Debussy and stage direction by Enrique Lanz.

The maximum capacity of the Arriaga Theater is at this time of 600 locations and tickets can now be purchased both at the theater box office and through its website.

ABAO Bilbao Opera will start its new Season with the will and commitment to offer live and direct shows and excite the public as it has historically done, supporting culture in any circumstance, even in the most adverse ones like the current ones.