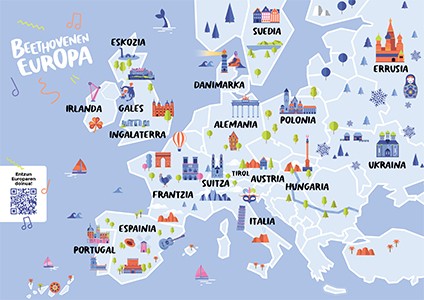 Next Saturday 20 of March ABAO Bilbao Opera presents the world premiere of Ludi's journey, a production by ABAO Bilbao Opera and Yotumi Kids, with the sponsorship of the EDP Foundation. Third title of Season XVI ABAO Small, This musical theater directed by Guillermo Amaya combines the power of music with the magic of theater to, by Ludwig van Beethoven, go on a journey through Europe discovering the different aspects of the history of music. The Arriaga Theater will host three performances to enjoy with the family on Saturday 20 to 18:00h and Sunday 21 to 12:00h and the 18:00h.

An original show full of surprises

Ludi's journey is a show of 60 minutes long, for young and family audiences that brings the figure of Ludwig van Beethoven into an entertaining and fun way through some peculiar characters. The imagination in this work has no limits, and discover great "lieder" (songs) composed by the immortal Beethoven. The text is the work of the prestigious playwright Ana Alcolea, specialized in children's and youth literature and winner of several awards, among them, the Cervantes Chico Award.

History begins a journey through Europe where a little of everything will happen. Exciting and magical moments to learn the music and culture of different countries, with audiovisual projections and a stage where soap bubbles will snow, or where a prodigious piano is also a trunk full of memories and gadgets, a ship and even a theater, work of the set designer and costume designer Pedro Chamizo, also in charge of lighting and video projections.

The well-known and popular actor and singer Raúl Peña, plays Beethoven, an old curmudgeon full of surprises that when the music plays is transformed and rejuvenated. He is accompanied by the tenor Manuel Gómez Ruiz as Günther, a young and ambitious composer who adores Beethoven and wants to continue learning from his teacher; and the mezzo-soprano Marta Infante as Gertrud, Beethoven's young helper and caretaker, Günther's accomplice.

The Trio Arbós, National Music Award 2013 and one of the most prestigious chamber groups on the Spanish music scene, puts music to the show with Juan Carlos Garvayo on piano, Ferdinando Trematore, violin and José Miguel Gómez, cello

A new premiere to close the XVI ABAO TXIKI Season

The days 15 Y 16 May the show's premiere in Bilbao closes the season ÁR BO LA RÉ, a production of the Donostiarra Musical Fortnight and the EASO Choir. A children's music-theatrical show in Basque, made by and for children, performed by the Easo Gazte and Easo Eskolania Children's Choir that focuses on sustainability, nature, and ecology. A very suggestive poetic universe that allows a free and adaptable interpretation in which images of trees follow one another, nature, sunset and life. The music is by Étienne Daniel, well known in France for his choral work and children's pieces, and the verses, translated and adapted to Basque, by Alain Boudet, who has dedicated a large part of his activity to the dissemination of poetry in France.

Tickets for ABAO Txiki can be purchased at the Arriaga Theater box office, at www.teatroarriaga.eus or by phone: 946 850 850 (Arriaga), and multi-service tellers BBK.