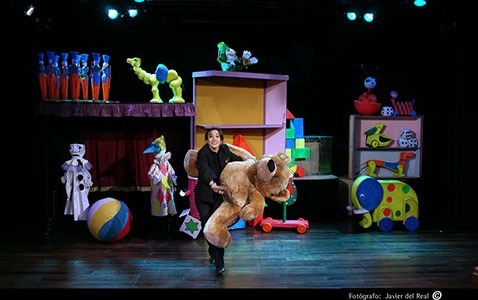 Saturday 16 October, the seventeenth season of ABAO TXIKI opens at the Arriaga Theater with the staging of The toy box of the Etcétera Company. Based on the play The toy box of the French composer Claude Debussy and the illustrator André Hellé, this show reinterpreted by the director of the company, Enrique Lanz, offers three functions to enjoy with the family on Saturday 16 to 18:00h and Sunday 17 to 12:00 and to the 18:00h.

This version of Lanz y Etcétera of one of the best known musical stories for children, inspired not only by The toy boxoux but also in other Debussy works such as The children’s corner Y The little negro, has a pianist, an actress, four puppeteers and numerous puppets, all accompanied by video projections and a large number of animated toys. It lasts fifty minutes and is recommended from the 4 years.

Music is delicate, friendly and with very different melodies for each character, which will allow children to easily follow the plot of the story. The original fable, the love story between a ballerina doll and a wooden soldier with a happy ending, is enriched with a contemporary interpretation where values ​​such as non-violence are emphasized, the futility of war, the power of play or the power of love. A position on gender equality is also offered. On the one hand, the doll does not accept the incorrect treatment of Polichinela. On the other hand, the formula of the hero who saves the lady is reversed, because here is the doll who protects the soldier.

The show is performed with live piano by Jorge Camacho and staged by the actress Yanisbel Victoria Martinez and the puppeteers Itziar Andia, Cristina Colmenero, Christine Mackenzie y Leo Lanz. The puppets are designed from real toys from the years 20 Y 30 last century: meccans, fluff, architecture games, little soldiers, pellets, tentetieso, etc. Shades, audiovisual objects and projections coexist in the set, perfectly intertwined in the dramaturgy of the play, with the aim of awakening in the little ones a taste for music, in a work of reference in the compositions of the twentieth century, that since its premiere has been performed all over the world.

After The Toy Box, arrives in January to celebrate Christmas, Guillermo Tell, from the immortal opera by Rossini, the company La Baldufa creates a fast-paced and fun adaptation around the exciting adventures of the Swiss hero.

In March comes Bost Axola Bemola, a lyrical show in Basque, dynamic and fun, which proposes experiencing life in a theater through well-known arias and opera duets. A co-production of ABAO and the Arriaga Theater devised by Enrique Viana with music by Mozart, Wagner, Rossini, Gounod, Bizet, Offenbach, Auber y donizetti.

Season closes in May Allegro Vivace of the Gran Teatre del Liceu. An introductory opera show created by the Comediants company, that through the music of Monteverdi, Purcell, Mozart, Rossini, Donizetti, Berlioz, Verdi, Bizet and Puccini, tells the story of a young woman passionate about modern music who ends up discovering the treasures of opera at the hand of a unique character. Kutxa Labor Sponsorship.

ABAO Bilbao Opera maintains its commitment to the education and development of the youngest through innovation and the programming of quality shows. The seventeenth edition of ABAO Txiki at the Arriaga Theater is consolidated both in the artistic and educational aspects, with four shows with the most acclaimed productions by family audiences.

Tickets for ABAO Txiki can be purchased at the Arriaga Theater box office, at www.teatroarriaga.eus or by phone: 946 850 850 (Arriaga), and at the BBK multi-service ATMs.