ABAO-OLBE opens its 66 I Masnadieri season with Verdi 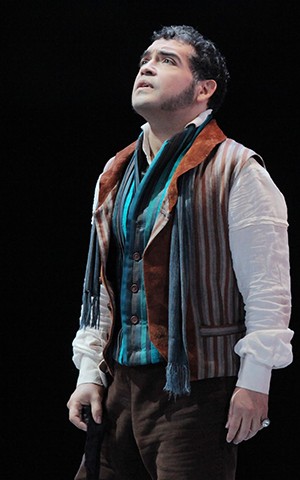 ABAO-OLBE (Bilbao Association of Friends of the Opera) opens its 66 season I Masnadieri in Verdi. This title makes up the twelfth edition of TUTTO VERDI project of the Association and facing its final stretch. The following days 21, 24, 27 Y 30 October, sponsored by IBERDROLA, up on stage this opera premiered in London, one of the bel canto Italian master, which has all the characteristics of romantic movement: passion, idealism, rebellion…

In this drama, which takes place in Germany in the early eighteenth century, Verdi knew focus conventions and conditions Italy eight uniting them with the particular tastes of Victorian London. To give life to the protagonists of this title full of new musical resources, where dramatic moments with lyrical and coloratura phrases alternate, ABAO-OLBE has assembled a cast led by Aquiles Machado, a tenor known for the Bilbao public has since visited seven times, and that is conquering the European scene with commitments in Vienna, Zurich, Moscow, Bologna, Belgium… Beside makes his presentation at ABAO young Italian soprano Marta Torbidoni in the role of 'Amalia', role recently played in the same production in Busseto Giuseppe Verdi Theater. Bulgarian baritone Vladimir Stoyanov as 'Francesco' and low Mika Kares as 'Massimiliano' quartet complete the protagonist. Tenor with them Juan Antonio Sanabria as 'Arminio', the bass petros Magoulas as 'Moser' and tenor Alberto Nuñez as 'Rolla' close poster.

The musical part is in charge of teacher Miguel Ángel Gómez Martínez, conductor of the Symphony Orchestra of RTVE and an expert in this repertoire, who takes charge of the Bilbao Symphony Orchestra to direct a title in his own words "it offers a special freshness and spontaneity". The choral part is once again task Bilbao Opera Choir, with Boris Dujin in front.

On stage a production of Teatro Regio di Parma which it opens for the first time nationally, devised by debutant ABAO, Leo Muscato. This is a show with historical and contemporary sense where thieves, in eternal pursuit of happiness, They are modern but revolutionary. Between fire and iron, Muscato commitment haunted wood with a ring on a misty, wooded atmosphere full of dramatic tension, symbolisms and light effects. A beautiful wardrobe Silvia Aymonino reveals the Gothic and timeless part of this drama.

Conference on "I Masnadieri '

In order to analyze, in advance the premiere, the most important aspects of this opera by Verdi, ABAO-OLBE has organized a conference, Free entrance until full capacity, For friday 20 October in the Auditorium of the Museum of Fine Arts (entrance door by Chillida) to 19.15 hours. This time will be Andrea Merli, music critic, essayist and lecturer. regular contributor to the magazine L'Opera and Milan correspondent of the magazine Opera Actual. His interest in music and opera has led him to publish numerous works in theaters and specialized media. For over a decade it has an opera program on RAI Radio.