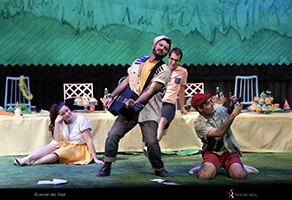 Next weekend, 19 Y 20 from December, One of the great youth shows scheduled for this season arrives at the Teatro Real: Dido and Aeneas, a hipster Tale. Adaptation of the opera Henry Purcell Dido and Aeneas, composed 1688, which tells the love story of Dido, Queen of Carthage, and Eneas, Trojan hero, and it is considered one of the most dramatic and interesting works of Baroque.

The proposal that we will see on stage at the Royal, Rafael R. Villalobos, responsible for the dramaturgy and staging, moves the action to today, XXI century, to analyze the difficult period of adolescence and seek answers to the problems and experiences that young people today: The development of personality, friendship, love, jealousy, he bullying.. with dialogues and youth vocabulary close to the public for which it has been conceived.

The website of the Royal Theatre, in its section of children's and youth shows, has extended information about the show in an interesting educational guide that viewers can download for free, to delve into the dramaturgical aspects, musical and philosophical representation: http://www.teatro-real.com/es/ninos-y-jovenes/programa-pedagogico/espectaculos-infantiles/dido-amp-eneas

the mornings of the days 19 Y 20 from December, in double sessions, to 11.00 and to the 13.00 hours, the baroque becomes modern in an opera show that is much more than music and from which no one will leave indifferent.