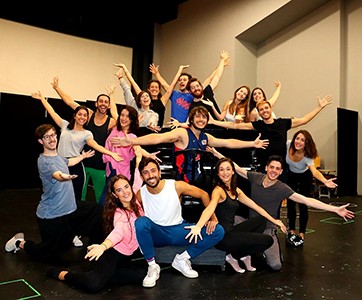 He Zarza project of the Teatro de la Zarzuela now he born four seasons ago with a clear and necessary intent: in the XXI century popularize the genre that gives name. Within this firm objective, young audiences has a decisive relevance. Get this approaching without fear and free from prejudices to the zarzuela, thereby continuing gender and strengthen its future, It is eager and happy purpose of the initiative.

For this reason the Teatro de la Plazuela de Jovellanos launched Zarza Project, one of its flagship initiatives, aimed at a young audience from 12 Y 18 years. The title chosen in this fourth edition is 'Water, sugars and brandy ' from Federico Chueca, And it will be played by young singers from 18 Y 30 years were chosen through a rigorous audition process in which participated more of 300 boys and girls. It can be said that these singers and actors are today the young company Zarza Project.

'Water, sugars and brandy ', in this new production of the Teatro de la Zarzuela, It is a free version of the work of Chueca signed by the playwright and novelist Nando Lopez from libretto Miguel Ramos Carrión write late nineteenth. Musical direction and scenic borne, respectively, from Oliver Diaz (from the piano) and Amelia Ochandiano, and the seventeen actors-singers They will be accompanied by a chamber orchestra composed of eight young musicians. All functions will be in the main hall of the Teatro de la Zarzuela in the 2 al 7 of March, Y school will alternate passes (for students of secondary and high schools) and functions for the general public (6 Y 7 of March) with a total of 11 sessions. In school appointments, after the show will be held one colloquy between the public and artists.

A poetic journey through time

This "corridor summer in an act" is made, so, by and for young people, priority following the philosophy of the project: bring the genre to new generations; and what better way to do that using their own language. Ochandiano holds the respect "is now, in the XXI century, when we face the challenge of offering this little piece of history of our brightest musical theater to new generations. " And he says "The real fondness for the theater or in this case the love for musical theater or operetta, born from attending shows, live theater experiences made from the rigor, excellence and contemporary language that requires doing theater; because doing theater -points- this implies, is a commitment to our time and our vision of men and women today. "

This new version maintains all musical numbers, but not change the texts sung, adapting the original characters to the XXI century and making Federico Chueca is a character. The proposal stage makes the work a poetic journey through time, where present and past are mixed in the story a magical night in Madrid what, as noted Nando López, "Becomes hallway". A tribute to Madrid reference meeting place, crossroads and destinations, search space and hopes deposit, "a place to dream", as he stated in the own stage director, which brings us to a key work of our lyrical through this suggestive, dynamic and fresh bet once again celebrates commitment to the theater with young artists and young audiences.