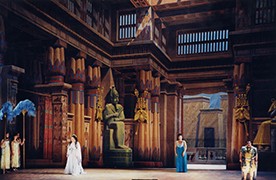 The Teatro de la Maestranza hosts in October two acclaimed shows of the season 2013-2014: the representation of Verdi's Aida and the concert guitarist Vicente Amigo.
Cycle Opera opening of the season, the days 25, 28 Y 31 October 3, 6 Y 9 of November, Maestranza reaches a magnificent title of Italian composer Giuseppe Verdi, Aida. In a co-production of the Gran Teatre del Liceu and the Santander Music Festival, José Antonio Gutiérrez will be in charge of staging such an emblematic title. A cast made up of unparalleled voices like those of Tamara Wilson, Alfred Kim, Mark S. Doss, Dmitry Ulyanov and Maria Luisa Corbacho, among other, faces the ambitious challenge of interpreting one of the most vocally demanding operas in the repertoire, also scenically. Aida will be performed in six performances under the direction of maestro Pedro Halffter at the head of the Seville Symphony Orchestra.
Flamenco guitarist Vicente Amigo returns to the Maestranza to inaugurate the Cycle of Flamenco with a concert in which he presents his new work Tierra; an album that mixes flamenco roots with subtle Celtic touches. Tierra's soothing music has been composed entirely by guitarist, although it has arrangements by Fletcher and was presented to the public last January at the Scottish Celtic Connections festival.
Vincent Friend, born on guadalcanal (Sevilla), but raised and educated in Córdoba -and from Córdoba he feels- he is today one of the great masters of flamenco guitar, to which he has given a special inner sensitivity that makes his touch, both, in intimate and rhythmic, perhaps because of the double influence it received in its origins.