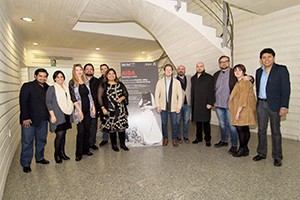 It is about, However, the second incursion of the Valencian master at Les Arts, as recalled by the Mayor Davide Livermore in the presentation of this opera. Ramón Tebar assumed the musical direction of the latest features of Nabucco last season, that was settled "with unanimous success from the public and critics".

Aida is for Ramón Tebar a symbolic title for his return to Valencia as musical director at the opera house in his hometown. Aida, known among others, for the aria 'Winner Returns', is for the Valencian a masterpiece, loaded with a message around human passions and warfare, which ends with an evocation of peace in the mouth of the character of Amneris.

The Valencian arts center has scheduled five functions of Aida: the days 25 Y 28 February, just like him 2, 5 Y 9 of March. Les Arts recovers the montage of David McVicar, made in co-production with London's Covent Garden and the Oslo Opera House, in the year 2010 premiered in Valencia Lorin Maazel Y Omer Meir Wellber.

The montage features scenography by Jean-Marc Mighty, wardrobe Moritz Junge and lighting Jennifer Tipton. The choreography is the work of Fin Walker, while David Greeves is the director of martial arts. Allex Aguilera is in charge of the stage direction of the revival of Aida.

During his explanation of the play, Davide Livermore has defended the Scottish stage director's proposal, "As heir to the true provocation that Verdi was looking for with Aida".

“Aida has come to our days as a synonym for Ancient Egypt, of pyramids, elephants, camels ... but for Verdi that "Ancient Egypt" is nothing but the framework in which to synthesize his greatest concerns, between them, the big nation that oppresses the little one, the brutality of the empire to destroy the individual and the overwhelming power of the Church over all classes… Variables that Verdi could never have set in Europe ”, Livermore explained.

"That pharaonic Egypt of the first representations, -has qualified Livermore-, it is no longer exotic for us ". Therefore, David McVicar draws on a multitude of ancient civilizations to create a mythical land that causes distancing, rejection and rebellion among the spectators before the barbarities that Aida relates and the beauty of the score. "That is the essential social function of opera", the Mayor has pointed out.

Aida, in Verdi, requires, Besides, of excellent stable bodies such as Heart of the Government and the Orquestra de la Comunitat Valenciana, of a powerful cast, led by sopranos in Les Arts María José Siri Y Lucrecia garcia in the role of Aida.

The Arts reports that Oksana Diving has suspended its presence in Valencia for health reasons and will be the Uruguayan María José Siri, who starred in Manon Lescaut last season, from Puccini, who replaces the Ukrainian diva in the representations of the 25 Y 28 February.

The Venezuelan Lucrecia García will sing the three performances of Aida in March. García, which debuted in Les Arts in 2011 with Mephistopheles, from Arrigo Boito, has been revealed in recent years as one of the new voices of the Verdi repertoire.

The Puerto Rican Rafael Davila plays Radamès, captain of the egyptian guard. the tenor, who sang for the first time in Valencia with María José Siri in Manon Lescaut, develops an intense career in the United States where, among others, has worked with Ramón Tebar himself.

Close Aida's love triangle Marina Prudenskaya as Amneris, the daughter of the king of Egypt. The Russian mezzo-soprano was part of the cast that in 2009 performed for the first time in Spain two complete cycles of Der Ring des Nibelungen, from Wagner in Arts.

They also return to Les Arts, baritone Gabriele Viviani, who embodies Amonasro -except in the representation of the day 9, sung by Ionut Pascu- and low Riccardo Zanellato which gives life to Ramfis, High priest.

Four emerging artists from the Center Placido Domingo, Alejandro López, in the role of the king, Lara Fabian, as Messenger, y las sopranos Federica Alfano (25, 2, 5) Y Tatiana Irizarry (28, 9), that alternate the role of the Priestess, complete the cast of Aida.

The Palau de les Arts Reina Sofia announced that tickets for Aida, in Verdi, They are sold out within two weeks of its release, except 5% the capacity of the room that the regional law reserves for sale the same day of each performance.

Likewise, the public has also exhausted the 100 places available for guided tours of Les Arts with attendance at Aida's rehearsals on days 16 Y 17 February. Last season, the arts center launched this new visit format that allows attendees to know 'in situ' the work prior to the premiere of an opera production, in addition to touring the different spaces and rooms that the building designed by Santiago Calatrava houses.

Aida is an opera in four acts with music by Giuseppe Verdi and a libretto in Italian by Antonio Ghislanzoni, which was based on the French version of Camille du Locle of the story proposed by the French Egyptologist Auguste Mariette. It premiered on 24 December 1871, at the Cairo Opera House.

Set in Egypt, tells the love story between Aida, an ethiopian princess, but a slave in the land of pharaohs, y Radamès, Egyptian military man and captain of the forces that occupied the land of Aida. Amonasro opposes this love, father of the ethiopian princess, that demands revenge, and Amneris, daughter of King, who wishes for herself Radamès.