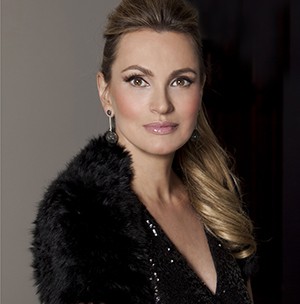 the soprano Ainhoa ​​Arteta, accompanied by Roger Vignoles, one of the best pianists specialized in Lied, will hold the next Monday 10 of diciembrs going on 25 Lied cycle years that he National Dissemination Center Musical (CNDM) coproduced with Teatro de La Zarzuela.

It will do so with a recital in which premiere the song cycle magical path, commissioned work by composer Lorenzo Palomo CNDM straight cycle anniversary. Alongside this premiere, Vignoles Arteta and interpret the Three Petrarch Sonnets but Liszt and works Jaime León, Jayme Ovalle, Osvaldo Lacerda, Fernando Obradors and Enrique Granados. The seats for this concert are exhausted.

Arteta starred in October, with great success of critics and audiences, the operetta Katiuska Paul Sorozábal, which he opened the season 2018/2019 the Teatro de la Zarzuela.

In recent years he has received numerous awards such as the ‘Gold Medal for Merit in Fine Arts’, Doctor Honoris Causa by the Universidad Rey Juan Carlos, Spain Brand Ambassador, 'Prize Hispanic Society of America' for his contribution to the arts, Award for "Best Classical Music Artist" in the V Edition of the ‘Music Awards’, ‘ONDAS Award’ for the most notorious work in classical music, ‘Federico Romero Award’ from the Fundación Autor for his career of international projection, 'Gold Medal of the Palau de la Música', Honorary President of the Maestro Segovia Association, Academic of the Royal Academy of Fine Arts of Cádiz, Universal Basque, Patron of the Foundation Choir-Catalan Music Palace, artist-in-residence of the Cadaqués Orchestra, ‘Golden Microphone of the Federation of Radio and Television Associations of Spain’, 'Enric Granados Prize' and Gold Medal of the Association of Friends of the Opera Lleida, as well as the ‘City of Alcalá Award for Arts and Letters’.

Of his greatest successes should be highlighted their participation in Cyrano de Bergerac with Plácido Domingo at San Francisco Opera and at the Teatro Real, Bohemian at the Metropolitan and La Scala in Milan, Otello in Corunna, Turandot, Carmen Y Bohemian at the Lyceum, Dialogues des Carmelites, Eugene Onegin Y Simon Boccanegra en ABAO, as well as the premiere of the opera in Paris The last day of a convict junto a Roberto Alagna, Don Carlo at the Opera de Oviedo y Don Giovanni at the Theatre Royal, her role as Alice Ford of Falstaff with Bryn Terfel at the San Francisco Opera, he Requiem by Verdi at the Suntory Hall and Fukushima with the Tokyo Philharmonic Orchestra under the baton of Nicola Luisotti, Manon Lescaut at the Teatro de la Maestranza, AAdriana Lecouvreur en la ABAO, Tosca in Bologna Teatro Comunale of Reggio Emilia and, La Wally at the Grand Theater de Geneve, Bohemian in the Fine Arts in Mexico and Tosca with Marcelo Álvarez in Sao Paulo. His Falstaff in Covent Garden, Tosca at the Welsh National Opera with Bryn Terfel, opera gala at the Vienna Konzerthaus Wiener Kammer Orchester with, Tosca en la German Opera de Dusseldorf, Manon Lescaut en ABAO, Alice Ford Falstaff at the San Carlo Theater in Naples and A Coruña and his debut at the Bolshoi Theater in Moscow with the role of Manon Lescaut, as well as the Sydney Opera House with Tosca.

His recent and upcoming engagements are Tosca in the arena of Verona, San Carlos Theater in Naples and at the Deutsche Oper in Düsseldorf, Manon Lescaut at the San Carlo Theater in Naples and Bolshoi, Requiem by Verdi with the Royal Liverpool Philharmonic under the direction of Vasily Petrenko, Andrea Chenier Opera in Oviedo, Bohemian en ABAO, Adriana Lecouvreur In sevilla (Maestranza), I Pagliacci (Nedda) in the Currency of Bruselas, Madama Butterfly at the Lyceum and Don Carlo at the Theatre Royal.