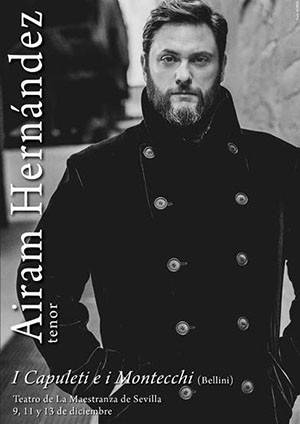 Airam Hernandez, one of the most important singers of his generation who continues to conquer international stages, returns in December to Teatro La Maestranza of Sevilla, this time to debut I Capuleti e i Montecchi Bellini. The canary tenor, he claims to find himself "charmed"To add this new role to his list of bel canto characters: “Bellini was a genius of melody; their related, His elegant and infinite phrasing and the enormous importance that the Catania composer gives to the word made me fall in love from the first moment I sang a score of his; its music allows you to color and fly with the beauty of its melodies. It is wonderful to return to his music and it will be fantastic to do so with the teacher Jordi Bernàcer and before an enthusiastic public like the Sevillian.; this season I play two very contrasting characters from Bellini: Tebaldo (in the spectrum of the lightest repertoire) y Pollio (in the most dramatic realm)”, He concludes the tenor.

After reaping a personal triumph at the Campoamor Theater in Oviedo with his first Prince Tamino de The magic Flute, the versatile singer faces the bel canto character in a new staging co-produced between the Opera de Tenerife and the Teatro Comunale de Bolonia, with stage direction by Silvia Paoli and with Jordi Bernàcer at the head of the Royal Symphony Orchestra of Seville. Along with his Tebaldo complete the cast Daniela Mack (Romeo), Leonor Bonilla (Juliet), Luis Cansino (Capellio) y Dario Russo (Lorenzo). The functions are scheduled for the days 9, 11 Y 13 from December.

The Canarian interpreter has been developing his career mainly on European and American stages, but this season he has finally been able to focus his agenda on Spanish territory: in addition to the debut in Oviedo and the commitment at the Maestranza, this course will return to the billboard of the Teatro Real de Madrid in the skin of Federico García Lorca in what will be the absolute premiere of the opera the letter opener of the recently deceased composer Luis de Pablo. He will also sing at the Opera de Tenerife (Florencia en el Amazonas by Daniel Catán) and at the Gran Teatre del Liceu in Barcelona (Rule Bellini).