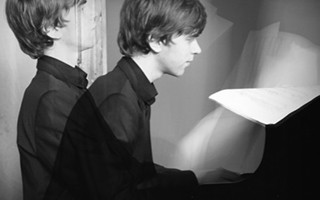 Theaters Canal Madrid host the concert pianist Albert Cano Smit which will take place on Tuesday 22 November in the Red Room in the Young Performers organized by the Fundación Scherzo.

Albert Cano Smit was born in Geneva (Switzerland) in 1996. To the 6 he moved to Barcelona. After joining the School of Music of the Abbey of Montserrat she received a scholarship to continue his musical studies at Chetham's School of Music (United Kingdom). It has been awarded at the Hilton Head Piano Competition, he Ricard Viñes Lleida, Manchester Competition for young pianists under 23 years, he Festival Chopin The Mazovia (Poland) and contest Beethoven Society of Europe.

He has performed as a soloist at the Bridgewater Hall in Manchester, Enric Granados Auditorium Lleida, Westminster Cathedral in London, Ambassador Auditorium Passadena and Walt Disney Concert Hall in Los Angeles. As a chamber musician, He has collaborated with Jean-Yves Thibaudet, Gary Hoffman, Andrej Bielow, Will Hagen and Gerhard and Szymanowski Quartets and is currently a graduate student at the Colburn Conservatory in Los Angeles (EE.UU.) with Professor Ory Shihor.

In this program, would highlight two pieces, Bells and Star (4th and 5th Forest Scenes Notebook) composer and engineer Ramón Humet (Barcelona 1968). It is a cycle of works for piano composed of several notebooks and based on natural phenomena.

Humet music has received wide dissemination and acceptance by the public and critics. Composer fine sensitivity and imagination and solid compositional technique.

The day 10 of January of 2017 Georgian pianist Mariam Batsashvilli offer a concert with pieces Bach, Chopin, Mendelssohn Y Liszt and the 14 February, Russian Daniel Kharitonov will perform works by Liszt and Chopin, and two creations of Rachmaninov.

The Young Performers of Scherzo Foundation has 15 Editions supporting the international career of young pianists and has set a target that every year there are two Spanish.