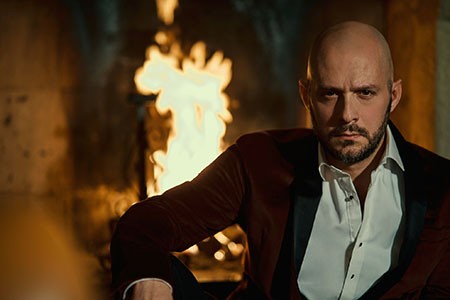 The Italian bass-baritone Alex Esposito sing, for the first time, on the Valencian stage of the Palau de les Arts Reina Sofía. will be the days 20, 23, 26, 28 Y 31 from January, Produced by The Tales of Hoffmann by Offenbach, with musical direction by Marc Minkowski and stage signature by Johannes Erath. Esposito will play all four “villain” roles (City Councilor Lindor, el inventor Coppelius, Doctor Miracle and the sorcerer Dapertutto), roles that he has already sung with great success at the Deutsche Oper in Berlin, the Teatro San Carlo in Naples, the Bayerische Staatsoper in Munich and the Stuttgart Opera.

Internationally appreciated for his great dramatic capacity, Alex Esposito confesses feeling very comfortable singing diabolical roles: “I like to be the bad guy in the opera… The Tales of Hoffmann, there are three ways to see the devil: the funniest is Coppelius, the capricious and trickster scientist who sells magic eyes to bring a mechanical doll to life; the most dramatic and violent is Miracle, a kind of doctor Mengele, a conspirator who plays with guilt feelings, to the desperation of a father who assists helplessly... However, Dapertutto is the one who fulfills the cruelest crime: rob man of his own identity… I'm not bad, I'm designed like this.", Esposito points out, who has also played Nick Shadow in The Rake’s Progress of Stravinsky and Mephistopheles in The Damnation of Faust Berlioz, and in Faust Gounod.

Born in Bergamo, Alex Esposito is one of the most requested singers on the international circuit, and its presence is habitual in the most prestigious lyrical theaters on the international circuit, such as the Royal Opera House in London., la Bavarian State Opera de Munich, La Scala in Milan, La Fenice in Venice, la German Opera de Berlín, the Paris National Opera or the Wiener Staatsoper, among others, and in famous European festivals such as the Rossini Opera Festival in Pesaro, the Salzburg Festival, the Donizetti Opera Festival or the Aix-en-Provence Festival. He has worked with leading batons such as Claudio Abbado, Antonio Pappano, Riccardo Chailly, Kent Nagano, Myung-Whun Chun, Giovanni Antonini or Teodor Currentzis, and has collaborated with renowned stage directors such as Peter Mussbach, Claus Guth, Graham Vick, Damiano Michieletto, David Alden, Laurent Pelly or Pierluigi Pizzi. further, has been awarded the "Abbiati Prize" by the Italian Music Critics, and the Bayerische Staatsoper has recently awarded him the title of Kammersänger.