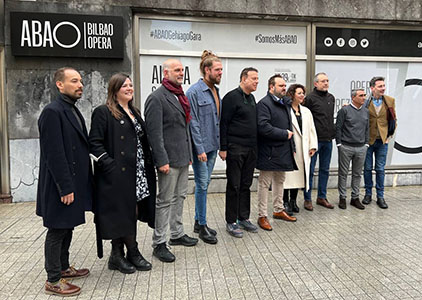 ABAO Bilbao Opera concludes the titanic project "All Greens" with the premiere of Alzira, the eighth opera composed by Giuseppe Verdi and one of the few European lyrical works dedicated to the Latin American continent. started in 2006, the project "All Greens" has brought to the Bilbao scene 30 Titles from the Verdian catalog, conference cycles, recordings and publications, in a cultural program without precedent in the whole world that has lasted 16 years.

Scheduled in the schedule 2020, Alzira had to be postponed due to the pandemic and rescheduled as a sixth title in the 70 season. They offer four functions the days 23, 25, 27 Y 30 of April at Euskalduna Bilbao. The performances will begin 19:00h on both Saturdays and at 19:30h Monday and Wednesday.

The opera that culminates the “Tutto Verdi” project adds one more incentive for fans and curious as it has a limited presence on stage. Does 168 years that it is not represented in Spain, so these functions constitute a milestone and an almost unique opportunity to enjoy this opera by the composer from Busseto.

POLICY, RELIGION AND A LOVE TRIANGLE IN AN EPIC WORK
Alzira, one of Verdi's shortest operas and corresponding to the period of "galley years", responds to the exoticism that so fascinated Europe in the mid-19th century. It is a lyrical tragedy with a prologue and two acts with a libretto by Salvatore Cammarano., based on drama Get up, or the Americans Voltaire, in what was the first collaboration of the Neapolitan poet with Verdi, who would also write the scripts for The battle of Legnano, Luisa Miller e The Troubadour.

Set the action in Lima and other areas of Peru, and illustrates the resistance of the indigenous people to political domination, religious and cultural during the time of the Viceroyalty, portraying how the natives come together to face the invading forces and free princess Alzira and her father Ataliba. in the story, they face the Inca Zamoro, beloved of Alzira and leader of the Peruvian tribes, and the Spanish tyrant Gusmano, Governor of Peru, who wants to marry at all costs with the protagonist.

Find in the most popular and represented composer in the world a story that refers to Peru and the time of the Conquest, it turns out a added appeal for one epic work between conquerors and subjugated, next to a devastating love triangle.

A SELECT HIGH-LEVEL CAST
the soprano Carmen Solis undertakes the leading role with his personal voice and extraordinary presence. It has scenes of great dramatic credibility like the exit aria “Da Gusmano south fragile barge”, preceded by the female choir, or the melodious "In the more than shining star".

the tenor Sergio Escobar (Zamoro), a bright voice, clear and forceful, has pages of great sound like "It simply came to our notice then, horrible excess ", "Irne far I should still" O "Not of cowardly tears".

The moody baritone Juan Jesus Rodriguez (Gusmano), great dexterity, scenic experience and a voice that is amply knowledgeable about the verdian palette. Some of his best moments are “Eternal memory” Y "How Much a Mortal Can Ask".

DANIEL OREN CONDUCTS THE BILBAOSINFONIETTA ORCHESTRA
The artistic director of the Teatro Verdi in Salerno, Daniel Oren, repeats presence this season with the challenge of directing a score little explored but full of intensity and drama. The critical edition of Stefano Castelvecchi preserves the double character of the opera: wild and effective on the one hand, sensitive and emotional for the other. There are many remarkable moments in opera such as the beautiful and unique Overture, the very exciting Final or the sextet and choir of Act I "In the dust genuflected".

Under his baton as an expert from Verdi they will be 60 teachers of the BilbaoSinfonietta Orchestra, a versatile and flexible training capable of covering with solvency the symphonic and operatic repertoire. At ABAO Bilbao Opera the orchestra accompanied the “ABAO Gala on Stage” in 2021.

The brilliant choral scenes are performed by 60 choristers of the Bilbao Opera Choir under the direction of Boris Dujin.

STAGE AWARDED WITH THE ÓPERA XXI AWARD FOR THE BEST NEW LATIN AMERICAN PRODUCTION
The careful staging of the debutant in ABAO Jean Pierre Gamarra, is a international co-production premiere in Spain of the Great National Theater of Peru, ABAO Bilbao Opera and the Opera Royal de Wallonie-Liége of Belgium. It premiered in 2018 in Peru, as part of the celebrations for the Bicentennial of the Country's Independence and in 2019 received the Opera XXI Award for Best New Latin American Production.

The staging takes the action to Lima at the beginning of the 20th century with a scenery of Lorenzo Albani minimalist and melancholy, where lighting takes on special importance and gives a sense of tragedy and captivity, adequate to this plot of the dominated and oppressed. Lorenzo Albani also presents a sophisticated Western-style wardrobe.

A high quality creative proposal and current in the issues it addresses, as the references to the violence with which the conquered are treated, class differences, the role of the church, the struggle for power or the tragedy of a woman who cannot escape from the obsessions of a man.

PABLO L. RODRÍGUEZ INTRODUCES THE WORK VERDIANA IN THE CYCLE THE ABC OF THE OPERA
The cycle The ABC of opera discovers the most relevant aspects of each title of the season in a conference on the eve of the premiere, at Auditorium of the Bilbao Fine Arts Museum.

He Friday 22 of April, Paul L. Rodríguez, musicologist, critical, music popularizer and lecturer, will be in charge of revealing the ins and outs of this opera and the work of its composer.

To access this free activity, an invitation is required, which can be picked up at the ABAO Bilbao Opera offices or by calling 944 355 100, since Tuesday 19 of April. reduced capacity.