Fernando Latorre debut at the Liceu with Boheme 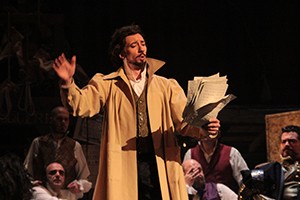 Fernando Latorre is a singer with a long artistic career, but it is now when it will produce its premiere in the Gran Teatro del Liceo de Barcelona. Latorre feels “very lucky to sing for the first time in this theater, one of the most important in the world and that has witnessed for almost two centuries the most important voices in the world of opera ".

This production of Bohemian in which the singer has already been rehearsing for several days and is "very comfortable", "Bears the signature of the English National Opera and the Concinnati Opera. It will be directed musically by Marc Piollet and in the scenic by Jonathan Miller”. Fernando Latorre will sing the two roles of Bajo Buffo, Benoit and Alcindoro to whom “I have a lot of affection, and for me it is a challenge to tackle them as they require two very different personalities, different ages and a wide palette of vocal colors to make them credible ", says the singer.

La Bohème in which Latorre will celebrate its premiere at the Gran Teatro del Liceo in Barcelona, will have a total of 14 functions between 18 June and 8 next july, and tell, in addition to the Basque singer, with the voices of Tatiana Monogarova Y Eleonora Buratto as Mimi, Nathalie Manfrino Y Olga Kulchynska as Musetta, Matthew Polenzani Y Saimir Pirgu in the role of Rodolfo, Artur Ruciński Y Gabriel Bermúdez like Marcello, David Menendez e Isaac Galan interpreting Schaunard the Paul Gay Y Anatoli Sivko como Hills. The production, set in the first half of the 20th century, will be broadcast live on 8 July in many Catalan municipalities through the initiative "Liceu a la fresco" of the Barcelona theater.

After the La Bohème shows, Fernando Latorre will attend the El Escorial Festival, in which he will participate in the opera of Verdi, Don Carlo, playing the role of Frate. The production, of the playwright Albert Boadella, will have two functions, the days 28 Y 30 July in the town of the Sierra Madrileña.