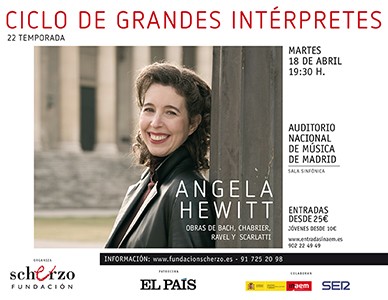 Angela Hewitt has brought the music of Johann Sebastian Bach all over the world to become one of the best interpreters of the repertoire of the Baroque master. Now, Debuts in Cycle Great Performers Foundation Scherzo with a concert next 18 of April, to 19:30 hours, at National Music Auditorium. the recital, Ecuador marks the 22nd season of this cycle, also it includes a selection of Sonatas Scarlatti; Sonatine, from Ravel; Y Whimsical drunk, from Chabrier.

In autumn 2016, Hewitt embarked on a great project with the title The Bach Odyssey, comprising all of Bach's works for piano on a tour of 12 recitals for four years. The pianist will perform in large cities and venues around the world, including London's Wigmore Hall, the National Arts Center in Ottawa, as well as in Tokyo and Florence. Other standout recitals this season include Vienna Konzerthaus, Birmingham Town Hall, Bath Mozartfest, Rotterdam's De Doelen, Bilbao Philharmonic Society and a tour of Australia with Música Viva. During the summer of 2015, Hewitt was a resident at the Shakespeare’s Globe in London.

Another of the most memorable aspects of the season 2016/17 are the performances with the Baltimore Symphony and Winnipeg Symphony orchestras, the Duisburger Philharmoniker y the Orchester Symphonique de Montreal. In spring 2017 began a tour of the United Kingdom with the Tonkünstler Orchestra of Vienna. His most recent appearances have been with orchestras such as the Toronto Symphony Orchestra., Washington’s National Symphony Orchestra and again an Asian tour with the Academy of St. Martin-in-the-Fields.

The pianist has won multiple awards for her recordings and garnered accolades around the world.. his album The Art of Fugue, Bach, was published in 2014 and his project developed over a decade to record Bach's main works for piano, released with the Hyperion seal, has been described by The Sunday Times as "one of the most splendid recordings of our era".

Among his latest albums is the sixth installment of the Sonatas by Beethoven a new recording of the Goldberg variations, Bach, and the symphony Turangalîla by Messiaen, con Finnish Radio Symphony Orchestra and Hannu Lintu. The first album in which he addresses the Sonatas Scarlatti was published in the spring of 2016. His discography also includes Mozart records, Schumann, Couperin y Rameau.

Born into a family of musicians, Angela Hewitt began her piano studies at the age of three, his first public performances were at the age of four and, one year later, got his first school scholarship. He studied with Jean-Paul Sévilla and, in 1985, won the Toronto International Bach Piano Competition. In 2006 received the Order of the British Empire and was named Companion of the Order of Canada in 2015. He lives in London, but he also has houses in Ottawa and Italy, where she works as Artistic Director of the Trasimeno music festival.

The 22nd season of Great Interpreters, in which Hewitt will debut, It was opened by the pianist Daniil Trifonov. Between January and November 2017 a dozen concerts are scheduled. The 22nd edition of the Great Interpreters Cycle will bring together musicians of the stature of Sokolov, Zacharias O Ashkenazy.