Annalisa Stroppa is Adalgisa at the Liceu 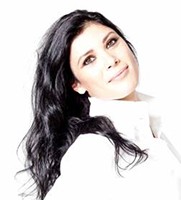 the mezzosoprano Annalisa Stroppa continues its unstoppable international career taking on new projects. Recognized for its stylistic adequacy romantic bel canto, for his prodigious timbre and phrasing, Italian interpreter has earned a place of exception in the main European stages. After starting the course inaugurating the season in the Gran Teatre del Liceu Barcelona with his acclaimed Rosina (The Barber of Seville, Rossini) and resuming the character in Tel Aviv between November and December, the young singer will return to Barcelona in February
interpret Adalgisa in Norma, Bellini, paper immediately after, already entered March, also she sings at the Calderon Theater of Valladolid. “I love Spain”, says the singer: “His art, your kitchen, music, the language and its people, gentle and always available. I also love the music of Bellini; his is the song of the soul. The Bellini melody
find out the most intimate and deep feelings of human beings, for this I am very happy to present my Adalgisa the Catalan public and Valladolid; It is a difficult role, but really wonderful. Adalgisa is a girl trapped in the nets of his first love, but it grows and matures during the opera. It is a dreamy girl, who suddenly finds face with the harsh reality and deception of Pollione. It's great to give voice to a character so pure; every time I play Adalgisa attempt to convey all the nuances”.

Stroppa in March and April will participate in a new production of Cavalleria rusticana sensual role playing Lola in the Salzburg Easter Festival sharing the stage with Jonas Kaufmann before getting back into the skin of Rosina, this time at the Teatro Filarmonico of Verona. At the Teatro Regio in Turin, in May, será la protagonista de Hansel and Gretel, month in which it will debut at the Opera de Tenerife Smeton playing in Anna Bolena with Celso Albelo Y Mariella Devia. In July waiting one of the milestones in his career: debut at the Teatro alla Scala in Milan, always with a masterpiece of bel canto as Rossini's Otello giving life to the character of Emilia next to the tenors Gregory customer Y Juan Diego Florez.