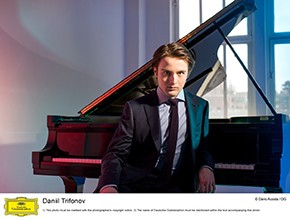 “Has it all and more … Tenderness and a diabolical element. I have never heard anything like it " Martha Argerich

In full bloom of a brilliant career as a pianist, Daniil Trifonov debuts in the 22nd season of Cycle Great Performers Foundation Scherzo with a recital that will take place next Thursday, day 19 from January, to 19:30 hours, at National Music Auditorium in Madrid. In this concert, with which the cycle begins, Trifonov will address works by Schumann, Shostakovich Y Stravinsky.

Daniil Trifonov was born in the Russian city of Nizhniy Novgorod in 1991 and he is considered one of the most outstanding players of the new generation of pianists. During the musical season of 2010/2011, won three of the most prestigious competitions on the contemporary music scene: the Chopin Competition (Warsaw), where he got the third prize; el Rubinstein (Tel Aviv), first prize; and the Tchaikovsky (Moscow), first and grand prize. He has been described by cultural commentator Norman Lebrecht as "a pianist for the rest of our lives”. After his success in the Tchaikovsky contest, Trifonov began an unstoppable and brilliant international career that has been consolidated thanks to the reputation of his performances, its musical depth and expressive intensity.

In season 16-17 premiere Transcendental, a double album that in addition to presenting Trifonov's third title as an exclusive artist of Deutsche Grammophon, presents for the first time Studies completos de Liszt. The winner of the Gramophone Artist of the Year award 2016, performed in October 2016 at the final gala of 125 anniversary of the Chicago Symphony under the baton of Riccardo Muti, interpreting the Piano Concerto No.. 1 de Tchaikovsky. Following his second Grammy Award nomination with the Variations Rachmaninoff, debuted with the Berliner Philharmoniker and Sir Simon Rattle playing works by the same composer at the end-of-year concerts that have been broadcast live across Europe.

In 2017 will also debut with the Melbourne and Sydney Symphony and the Royal Liverpool Philharmonic. He will also perform the “Rachmaninoff Cycle” on tour with the Munich Philharmonic with Valery Gergiev.

In season 16/17 performed with the New York Philharmonic Orchestra, Cleveland and Philadelphia orchestras, Staatskapelle Dresden, Salzburg Festival and BBC Proms in London performing Mozart's works. With Ravel he will perform again with the Staatskapelle, in addition to performing Beethoven with the Tonhalle in Zurich, Prokofiev with the Rotterdam Philharmonic, Chopin on tour with the Mahler Chamber Orchestra and Schumann with the Houston Symphony, Royal Stockholm Philharmonic and with the La Scala Orchestra on tour under the baton of Riccardo Chailly.

Trifonov, son of a composer and a music teacher, began his musical studies at the age of five, gave his first concert with orchestra at eight and attended the prestigious Moscow school in Gnessin, in Tatiana Zelikman's class. Despite your busy schedule, the Russian interpreter manages to find time to study with Sergei Babayan, as well as receiving composition lessons at the Cleveland Institute of Music, of which he has been a student since 2009.

Subscriptions are now available at affordable prices, since 169 euros for nine concerts, and with special prices for children 26 years, who will be able to buy tickets in the last half hour for only 10 euros. Throughout more than two decades of life of this cycle sponsored by El País, They have performed a total of 80 pianists in more than 200 concerts, of those who have enjoyed 300.000 people. These figures have become one of the best in their specialty cycles, in the opinion of both the interpreters who have passed through the cycle and the public that supports programming.