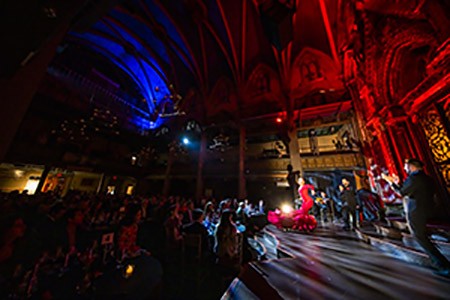 The great dancer and choreographer Amador Rojas, which inaugurated the first season of Flamenco Real and participated in all subsequent editions of the cycle, stars in the shows of this first American tour co-produced by the Teatro Real and Fever, in which he acts together with the dancer Yolanda Osuna (also choreographer and co-director), José Tomás Jiménez (musical direction and guitar), Manu Soto Y Bernardo Miranda (sing), Sergio Lope (musical codirection, saxophone and flute) Y Lolo Plantón (percussion).

The first concert, with a Spanish music program, has had the collaboration of the pianist Javier Perianes, in the first part, and the soprano Sabina Puértolas, in the second, partially dedicated to zarzuela. They will perform works by Manuel de Falla, Isaac Albeniz, Amadeo Vives, Pablo Sorozábal, Federico Chueca Y Gerónimo Giménez. Tickets can be purchased at the Carnegie Hall website.

The performance of the Teatro Real at Carnegie Hall is part of the National United States Hispanic Heritage Month and the 40 Anniversary of the Twinning of Madrid and New York, highlighting the potential of music, art and culture for the visibility and promotion of Spain in the United States.

A) Yes, in addition to the presentation of his Titular Orchestra in New York, the Teatro Real and Fever will offer, with the collaboration of Iberia and American Airlines, more of 50 flamenco performances in the United States: in NY (Harlem Parish), 25 performances of 9 September to 9 October; in Washington DC (Miracle Theatre), 16 performances of 14 October to 6 of November; and in Dallas, 12 performances of 10 al 20 of November.

This ambitious tour is an international extension of Real Flamenco (co-production with So-la-na), project started in 2018 with the creation of a space dedicated to flamenco in the Ballroom of the Royal Theater, and regular performances sponsored by Antonio Canales, that honor great artists in each edition: Carmen Linares, Maria Pajés, Blanca del Rey, Emerald Merch, Ramon the Portuguese, Manolo Sanlucar or Eva Yerbabuena, among others.