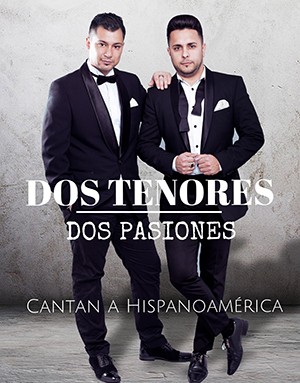 two tenors, two passions is an innovative cultural idea that motivated and connected to two great talents, the canary tenor Badel Albelo and Venezuelan tenor Giancarlo Santelli, and born with the firm objective to become closer, accessible and fresh lyrical repertoire coming with him all audiences. Both artists have proposed to bring the magic of interpretation above labels musical elitism.

The art project, arising from the enthusiasm of these two young performers and promises a place on the national agenda and
international, now takes more strength with the recording of their first album: “two tenors, two passions, sing Latin America”, a CD which will be officially presented at a concert to be held next 22 April in the Auditorium Adán Martín of Santa Cruz de Tenerife and whose repertoire emanate the air of an entire continent on a program that boleros and tangos and shine the most beautiful tunes of the classic South American songbook, Here adorned with warm and instrumental arrangements
careful editing. From popular topics Agus­tín Lara as “Granada” to other less publicized the great Mexican composer as “your portrait”, O “Silence”, Puerto Rican Rafael Hernández. The album will be released by the label Atlantis Music under the direction of music producer Sergio Núñez and will feature the master Juan Francisco Parra the piano. This is also a project that includes recording, edition, mixing and mastering the disc and a promotional video sponsored by the Cabildo de Tenerife, of the Auditorio Adán Martín, Canauto, Ask SA, and Restaurante La Torre del Mirador. In the presentation concert in Tenerife, in addition to the repertoire it included on the disc, Both artists will offer a second part with a review of popular romances of zarzuela, start of a tour that will take them to several cities in Spain as well as various scenarios of countries like Italy, Luxembourg and England.