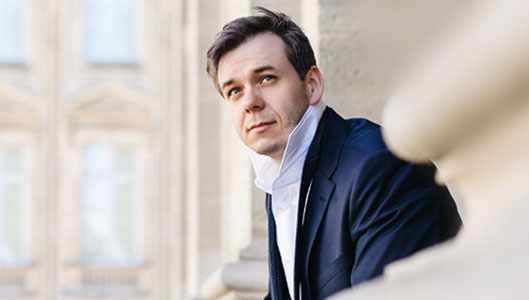 French tenor Benjamin bernheim play this sunday, 20 February, in the Main Hall of Palau de les Arts, ‘melodies’ by Chausson and Duparc and ‘Lieder’ by Brahms in the recital that he will offer within the cycle 'Les Arts és Lied'. Considered "the most beautiful tenor voice since Luciano Pavarotti" by the German newspaper 'Süddeutsche Zeitung', Benjamin Bernheim is currently an essential name in the seasons of the
Metropolitan New York, London's Covent Garden, La Scala in Milan or the operas of Paris and
Vienna.

Your constant work, perfectionist spirit and a solid vocal technique -influenced by personalities
such as Jaume Aragall or Carlo Bergonzi— have earned him the unanimous praise of specialized critics and the
public, to convert him, their 36 years, in one of the operatic sensations of the moment and artist
exclusive to the prestigious Deutsche Grammophon label.

For her Les Arts debut, the parisian tenor, accompanied on piano by Canadian Carrie-Ann
Matheson, performs an intensely romantic repertoire, very similar to the program with which he marveled
at the Salzburg Festival this past summer. Brilliant interpreter of the French 'mélodie' both for his
technique as his exquisite diction, Bernheim has chosen two of the most distinguished authors of the genre:
Ernest Chausson and Henri Duparc.

The tenor will start the recital with one of his favorite pieces, el ciclo de canciones ‘Poem of love and
the sea, on. 19’, that Chausson himself dedicated to Duparc and in which the composer captures the different
stages of love in the life of man.

After the break, Benjamin Bernheim will delve into the melancholic universe of Johannes Brahms, with
some of its most famous and appreciated pages such as 'Die Mainacht', 'Your Black Eye', 'Always
my slumber becomes quieter' y 'In the churchyard'. He will close the program with three songs by Henri
Duparc, 'An invitation to travel', ‘Phidylé’ and ‘The past life’.

Ticket prices for the recitals of the ‘Les Arts és Lied’ cycle range from 20 Y 40 euros.
Likewise, Les Arts launches, with this recital, a new initiative to bring this genre closer to
younger public with seats with a single price of 15 euros. For more information, the interested
you can check the theater website.

The cycle that Les Arts dedicates to this musical form that combines voice, poetry and piano will continue with the
Lisette Oropesa recitals (5 March 2022), Marianne Crebassa (2 April 2022) y Jakub Józef
Orliński (15 May 2022).