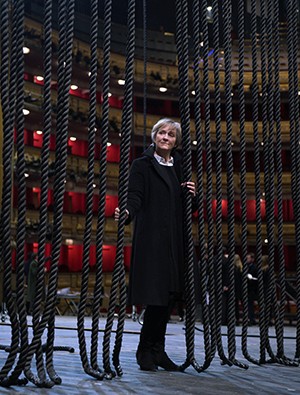 One purpose of programming Bicentenary of the Royal Theatre It is to offer the public essential titles the operatic repertoire still not on the musical heritage of the Royal Theatre, especially twentieth-century classics. In this case it is Billy Budd, one of the best operas Benjamin Britten (1913-1976) he never showed up in Madrid and will join the already long list of opera by British composer who have volunteered at Real since reopening: Peter Grimes (1997), The dream of a nigth of summer (2006), The rape of Lucretia (2007), A twist (2010) and Death in Venice (2014); and children's operas The Little Sweep (2005, 2006 Y 2008) Y Noah's flood (2007).

Between days 31 January 28 February, They will be offered 10 functions from Billy Budd, masterpiece Benjamin Britten which opens in Madrid with a new production of Teatro Real, in co-production with the National Opera of Paris, the Finnish National Opera and the Rome Opera. The musical direction will Ivor Bolton ─reconocido expert music composer inglés─, and staging of Deborah Warner, grand dame of British theater scene.

The opera, with a exclusively male cast ─5 tenors, 8 baritones, 1 bass-baritone and 3 bajos─ it will be led by the baritone Jacques Imbrailo, the tenor Toby Spence and low Brindley Sherratt, those who will second the other soloists, mostly Anglo-Saxon.

The magnificent choral parts will be performed by male voices Titular Choir of the Teatro Real ─con the rigor that characterizes the work of its director, Andrés Máspero─, and children of Little Singers of the Community of Madrid prepared by its director Ana González.

The Head of the Royal Theatre Orchestra will play Billy Budd for the first time, after his acclaimed readings of other operas of Britten ─como Another twist, The dream of a nigth of summer, The rape of Lucretia O Death in Venice─, this time under the baton of music director of the Teatro Real, Ivor Bolton.

Deborah Warner, much admired in Spain for its theatrical productions ─Happy Days Samuel Beckett, The Waste Land T. S. Eliot, Julius Caesar William Shakespeare, etc.─, is still unknown in our country the field of operatic direction, despite his extensive career in international opera world. He debuted in 1993 with Wozzeck, by Alban Berg, and since then he directs opera regularly in the most important theaters in the world, La Scala in Milan to the Metropolitan in New York, with highly acclaimed productions, including three operas of Benjamin Britten: A twist (Royal Opera House), The rape of Lucretia (Bavarian State Opera) Y Death in Venice (English National Opera, The Mint y La Scala).

Respecting precisely the most veiled and inscrutable spaces Melville tale that is the basis for the opera, treated with modesty and rigor by Benjamin Britten and librettists of the opera, Deborah Warner staging conceived without judging the characters and shunning the most simplistic separation between good and bad.

When Benjamin Britten (1913-1976) I started to compose a new opera commissioned by the Royal Opera House for Festival of Britain from 1951, He found in the disturbing posthumous and unfinished story Billy Budd, Sailor, from Herman Melville (1819-1891) ─el celebrated author of Moby Dick─, the subjects that fascinated him: ─presente sea in all its biografía─ and the world of marine, ethical and moral dilemmas, the ineffable power of youthful beauty, the ravishing and repressed homosexual attraction; and dichotomies recurrent throughout his work: the confrontation between good and evil, justice and the law, transgression and order, guilt and atonement.

To carry out the booklet ─uno of the most perfect of all literature operística─, Britten had the writer's literary vein Edward Morgan Forster (1879-1970) -whose novels A room with a view, Howard’s End, Passage to India, O Maurice managed cinematográficas- famous versions, and wisdom and sensitivity dramaturgical theater director Eric Crozier (1914-1994), both friends and faithful collaborators composer.

The enigmatic tale wealth originated Melville ─cuya different publishers versions, hermeneutical endless interpretations and even the famous film adaptation Peter Ustinov, from 1962, titled in Spain Billy Budd─, set in a British war ship, the Indomitable, in 1797, during the war with revolutionary France. He embarks on Billy Budd, an attractive and ingenuous sailor, whose freshness and beauty are a salutary lesson for the oppressed crew, equally destabilizing the ─el respected senior officers Captain Vere and perfidious weapon master John Claggart─, puzzled by the contradictory feelings that provokes the emergence of the kind efebo in his sordid world. The complex plot between these three characters, and its relations with the rest of the crew triggers the fate of Billy Budd, victim of a wicked plot, a microcosm infected by injustice, humiliation, the revolt and hatred.

Britten gives voice to the members of this infernal ship with admirable vocal writing and a masterly orchestration. It uses the large orchestra as if it were a chamber music group, looking for the most appropriate color for each sound dramaturgical moment, detrimental to the use of orchestral mass, It is including harp, clarinets low, contrafagot, saxophone, a large group of metals and many and varied percussion instruments (six performers).

Again the composer uses orchestral interludes, as in his opera Peter Grimes, which acquire special significance when the music goes where not enough words.

The first version of Billy Budd, four acts, It premiered at Covent Garden on 1 December 1951, with musical direction of composer. Despite the successful premiere, the opera had a short way to the presentation, in 1964, Also at Covent Garden, a new revised version, in two acts, directed by Georg Solti and recorded on disk 1967, under the baton of Benjamin Britten. this will be the version of the score that reveal Teatro Real, Finally, the public of Madrid.

Benjamin Britten: French Folksongs (When I was in my father, Beauty is in love jardín, etc.)

Alan Murray: I’ll walk beside you

Carrie Jacobs-Bond: When you come to the end of a perfect day

Benjamin Britten: Serenade for Tenor, Horn and Strings, on. 31