Bomarzo, de Ginastera, It premieres at the Royal Theater 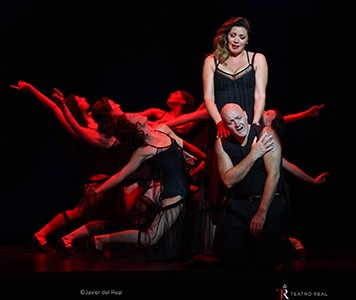 They offer 5 functions of the opera, between 24 April and 7 of May, in a new production of the Royal Theater and Opera Amsterdam, with stage direction by its artistic director, Pierre Audi.
The musical direction will be provided by David Afkham, senior director of the National Choir and Orchestra of Spain, who will head a cast and the Choir and Orchestra of the Teatro Real Headlines.
Released in 1967, Bomarzo It is based on the novel by Manuel Mujica Lainez, inspired by the breathtaking sculptures of the Park of Monsters, to the north of Rome, made in the sixteenth century.
The opera is a breathtaking journey to the past when, in a paroxysm of death, a duke hunchback, tormented by physical deformity and obsessed with immortality, reviews his corrupt and libertine life within the Italian nobility of the five hundred.
The last stage performance of Bomarzo in Europe it took place in 1976 in London, so the opera has not been staged in a European theater for over 40 years.
Bomarzo It will be broadcast live and free for everyone on Friday, 5 of May, in stage Digital Y The Opera Platform, under the European Opera Days.
The opera will remain available for one month, also free, in stage Digital -from 5 May to 5 of June- for all who want to see it in streaming.
In order to further strengthen the bond of the Royal Theater with Latin America, Bomarzo It will be screened in theaters in Chile, Colombia, Ecuador and Mexico, and in all cultural institutions wishing to use for a month available Palco Digital recording.
Likewise, Bomarzo It will be broadcast delayed on Radio Clasica RNE and radio stations throughout Europe through the EBU (European Broadcasting Union).
The Royal Theater is offering since February extensive programming around Bomarzo, which highlights concert Maria Bayo (25 of April), the tango concerts Ariel Ardit (3 of May) Y Adriana Varela (6 of May), the morning concert Chamber Sundays (30 of April) and children's workshop Everyone to the Gayarre! (9 of April).
Outside of the Real, at the Sony Auditorium of the School of Music Reina Sofia, hosting a concert Patricia Noval and trio (26 of April) and the Fundación Juan March, two concerts of its cycle dedicated to Ginastera (3 Y 10 of May) .
Finally, at the National Library will be able to contemplate the exposition Bomarzo: where monsters do not die (until the 25 of June) and Royal Theater offers a small sample, on the seventh floor, entitled Manuel Mujica Lainez and 'Bomarzo'.


BOMARZO, OF THE FOREST PARK TO SACRED MONSTERS

Bomarzo, Province of Viterbo, 100 km to the north of Rome, is a lush park, where colossal statues stone the sixteenth century, between trees, streams and parterres, that evoke mythical beings and fantastic carved with an almost expressionistic look. These disturbing sculptures sprouting from the rocks born under the auspices of the movies Pier Francesco Orsini, who, apparently, He purged the pain of the death of his wife entrusting architects manieristas Pirro Ligorio Y Jacopo Vignola his strange Sacred woods (sacred forest), later known as Monster Park (Park of Monsters) by the dark character acquired with the passage of time.

Manuel Mujica Lainez (1910-1984), Argentine writer and tireless traveler highborn, with a humanistic culture and endowed with a rich and inventive prose, It has been a brilliant author of historical novels. With Bomarzo, completed in 1962, It is recreated in the troubled life of the Duke contrahecho Pier Francesco Orsini and along more than 600 first-person account pages intertwined episodes of his miserly life and dissolute, between the devices of the Renaissance nobility. Despised by his family and deceived by his wife, Duke lives embittered, relying on the immortality that was conjured to be born. But the elixir of eternal life that give drinking is, Finally, the poison does die.

Fascinated by the novel by his compatriot, that bound him to the same attraction to the esoteric world, Alberto Ginastera (1916-1983) composed in 1963 the cantata Bomarzo, for reciter, male voice and chamber orchestra. Later, seeing the dramaturgical potential of the work, He decided to attend the commissioning of the Opera Society of Washington with an opera based on the tribulations of the Duke of Bomarzo, with the complicity of Mujica Lainez as the author of the libretto.

The music, with a bold and writing staff, shuns tonality and get to use the random microtonalismo, but also about the modal writing, perhaps to evoke the Italian Renaissance music, also suggested the use of traditional archaic forms as madrigal, the musetta, one to villanella.

The orchestra, with a conventional base string, wood and metals, It includes 73 percussion instruments, to add the key, mandolin, viola love and viola da gamba, giving the work, at special times, a Renaissance Perfume.

Bomarzo it premiered he 19 May 1967 Lisner Auditorium in Washington with a warm welcome and praise from critics. In August of that year, a few days before its premiere at the Teatro Colon in Buenos Aires, General Juan Carlos Onganía coup forced to withdraw opera programming citing the need to "protect public morals". The play, recorded in 1967 for the label CBS Records, He was presented in New York and Los Angeles before its release in Argentina in 1972. Since then he returned to the Teatro Colón in 1984, 2003 Y 2016.

In Europe, Bomarzo He made its debut in 1970 at the Kiel Opera (Germany), subsequently performing at the Zurich Opera in 1972 and at the Coliseum in London 1976. Since then, the work has been away from European stages, although an audiovisual version in the natural setting of the Park of Monsters was recorded with Jerry Brignone address entitled Bomarzo 2007, referring to the year of its release.

Opera now returns to Europe, 50 years after its creation, the next 24 April at the Teatro Real, with the presence of the daughter of the composer, Georgina Ginastera.

In his conception of the opera, Pierre Audi It is moving away from the physical and structural benchmark statues Bomarzo Park and the Italian Renaissance court to get carried away by the dream of the protagonist, reliving episodes of his life, Splitting into different human figures depending on age and time of each remembered experience in the paroxysm of death. The scenes take place under his delusional perception of reality, allowing the set designer and highlighter Urs Schönebaum creating a claustrophobic and decorated unreal, almost lunar, where different scenes unfold with the atmospheres created by the light design and projections of the prestigious videoartista Jon Rafman.

20 from April to 25 of June | National Library of Spain. Minimum room

Exposition: Bomarzo: where monsters do not die

Selection of drawings and engravings of the Five hundred

Conference: Bomarzo or enigma and heart of stone
Introduction to the world of Manuel Mujica Lainez and Alberto Ginastera focused on his most significant work, with its enigmas, their pain and their hidden secrets.

24 from April to 7 of May | Teatro Real. Seventh floor

Collection of the Museum of the Writer | Mounting: Modern Art Center

Live broadcast of Bomarzo for everyone open

The recording will be available in the library of Palco Digital, for free, between 5 May and 5 of June.

Bomarzo It will be available for free in stage Digital

The opera will be shown in the following theaters differed in Latin America:

Tango with Adriana Varela: By the turn