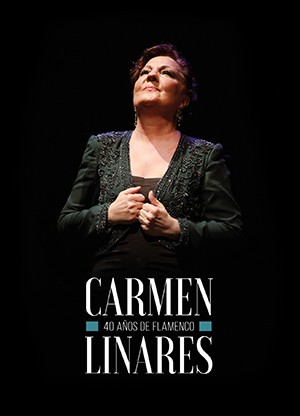 With Luz Casal as guest artist, It will go over much of the repertoire that has exalted as a undisputed legend of flamenco

He concert series of the Teatro de la Zarzuela Madrid has an exciting appointment next Sunday, 16 February, at 18h00. Carmen Linares, undisputed lady of flamenco, will hold its 40 year career in the coliseum of the Plazuela de Jovellanos. It will certainly be an especially intense moments later, like that in which the singer will share the stage with another woman, Luz Casal, voice that is dear companion of our lives.

Carmen Linares He began his solo career in 1980 accompanied by Juan and Pepe Habichuela. In the Andalusian festivals learned and starred singing figures as the flamenco Island Shrimp, Enrique Morente Y Jose Merce. From then until today, He has conquered his own right one privileged place in contemporary Spanish culture. Not in vain, It belongs to the best generation of flamenco with Shrimp, Paco de Lucía, Dying, Manolo Sanlúcar, Thanks to Tomatito.

"Carmen Linares: 40 years of flamenco " It is a concert with much of that essential repertoire which he has soared to the jaenera artist to be recognized as a undisputed legend of flamenco. A program that emphasizes his anthology Women sing, songbook Federico Garcia Lorca and tributes to Paco de Lucia, Mercedes Sosa and Enrique Morente.

A very special night in which he will sing, as claim, the musical identity of Andalusia Y the dramatic essence of the verses of our universal poets. Memorable as "Legend time”, “Andalusians of Jaén" O "you Jaleo”.