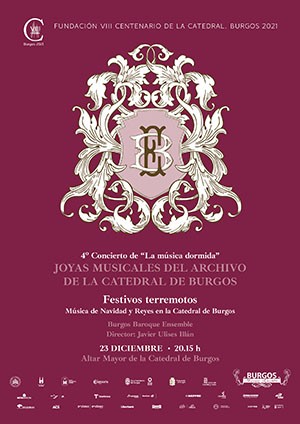 The cycle 'The sleeping music', with which the Foundation VIII Centenary of the Cathedral. Burgos 2021, the Cabildo Metropolitano and Burgos Baroque Ensemble rescue musical jewels from the Burgos Cathedral archive, comes to an end with a fourth and final concert on Thursday 23 from December, to 20.15 hours, in the main altar of the gothic temple. This recital responds to the name of earthquake holidays and will recall the celebrations that were organized for Christmas and Kings in the Cathedral of Burgos for centuries. The formation of historical interpretation Burgos Baroque Ensemble, directed by Javier Ulises Illán, will perform pieces from the 17th and 18th centuries by six chapel masters from the Castilian temple: Juan Garcia de Salazar, Diego de Arzedo, Jose de Vaquedano, Joaquin Martinez de la Roca, Manuel de Egues and Antonio Abadia.

Tickets for this Christmas Eve concert are now on sale at the Pilgrim Reception Center (from Monday to Saturday, from 9.30 a 18.30 hours), at a single price of 10 euros.

In this recital the peculiar wind instruments of the group La Danserye will sound, a bugle (natural trumpet), oboes (very modern instrument then, from France) and the baroque guitar, instrument of popular origin and that was prohibited in the Cathedral of Burgos since the year 1617, “except on Christmas night”, as explained by researchers from Burgos Baroque Ensemble. Christmas was one of the few occasions when unthinkable licenses were allowed in a temple, which led to not a few complaints from members of the Church.

The Christmas carol is the most characteristic musical form of these musical events, in which the main function is to bring the catechetical message closer to the common people, through music of live rhythm and dance, repetitive chorus and couplet structures, where the letter in Spanish is, sometimes, mocking or imitative of popular language and, at other times, of a more poetic and lofty character.

Formation from Burgos born in 2016, that brings together the historically informed interpretation (on period instruments) and innovative staging that try to bring ancient music closer to the general public. Its shows are articulated around thematic axes, authors or styles within the baroque period. Set up casts in which professionals with proven track records share the stage with other high-level musicians.

In this years, the search for continuous improvement in historically informed interpretation has led the group to count, in addition to your reference manager, Robert Alonso, with other masters of experience and proven quality, some of them true references in early music, or leaders in choral and vocal music. Among them, the figures of Nacho Rodríguez stand out., Ulises Javier Illán, Juan Gabriel Martinez and Marta Pilar Hernando, among others.