Cavalleria rusticana and Pagliacci in Bilbao 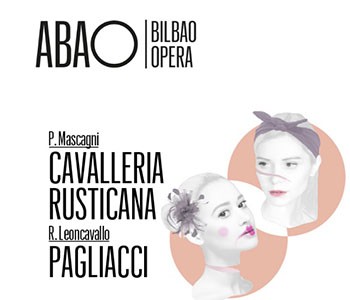 The most passionate Italy returns to the Bilbao scene with the double session of Cavalleria rusticana Y Pagliacci, own production and top voices. Love, honor, jealousy, revenge and a tragic end, coexist in the two verista operas, set in the south of Italy and famous for their famous melodies. The days 20, 23, 26 Y 29 of November at the Euskalduna Bilbao, the functions will begin at 19:30h except for Saturday 20 which will start at 19:00h.

VERISM IN PURE STATE
Cavalleria rusticana offers a perfect synthesis of melody and dramatic force. Its premiere was a resounding success and Mascagni had to come out to greet 40 occasions. Pagliacci, also released with great success, owes its strength to the intense passion of a musical language that exhibits moments of great strength linked to others of melodic subtlety. Leoncavallo uses in this opera concepts of The Comedia dell’Arte and the resource of the theater within the theater.
The two operas are usually performed followed by their theme and setting, but also for belonging to the same current: the verismo. Cavalleria rusticana It is considered as the foundational opera of the verista genre in music.. The Young school Italian, of which Mascagni were a part, Cilea, Leoncavallo, Giordano, Puccini and others, proposed a realistic renovation of lyrical opera. It is about reflecting sociocultural problems of daily life, and the protagonists are ordinary people, from town, with a direct and plain language.
Two brutal and at the same time moving stories, with a closing aimed directly at the viewer, to whom history comes as a true slice of life: jealousy, infidelities, revenge, devastating passions, fear, offenses, simple characters, important presence of religion, and above all, crude realism about a scourge that is still in force: gender violence.

A CAST OF GREAT VOICES
The leading voices of these two turbulent stories stand out, with a cast headed by Jorge de León, who faces the exhausting challenge of singing the roles of Turiddu and Canio in the same performance, with the extraordinary expressive force that both roles require. Quite a challenge for vocal talent, acting and scenic solvency of Tenerife, great world figure in his repertoire.
De León shares the leading role in Mascagni's opera with Ekaterina Semenchuk, a mezzo-soprano of enormous vocal intelligence and reference in the dramatic role of Santuzza; the ever brilliant baritone Ambrogio Maestri as Alfio, Elvira Bethlehem, who debuts in ABAO as Lola, and the legendary mezzo-soprano Elena Zilio como Mamma Lucia.

For his part in Pagliacci, Rocío Ignacio returns to Bilbao with the role of Nedda, a complex character, demanding and full of dramatic weight. The Sevillian soprano, meets again with the Bilbao public, after the successful recital of the ABAO on Stage cycle. The cast of Leoncavallo's work closes, baritone Ambrogio Maestri which also culminates in an operatic double at ABAO as Tonio, Carlos Daza with the role of Silvio, the Bilbao tenor Mikeldi Atxalandabaso like Beppe and the baritone Gexan Etxabe como A farmer.

DANIEL OREN DEBUTES IN FRONT OF THE BASQUE COUNTRY ORCHESTRA
Teacher Daniel Oren leads the Euskadiko Orkestra to face two scores full of violence and dramatic tension, well-known scenes and moments of great orchestral detail, specially in Pagliacci, that require the pulse, the personality and elegant baton of the Israelite master.
Musically both works are full of color, the first with closest music, catchy and traditional, and the second more elaborate and symphonic. Both with brilliant choral scenes for the Bilbao Opera Choir and collaboration in Pagliacci of the children's choir of the Choral Society of Bilbao.

A FILM-INSPIRED PRODUCTION
On stage a ABAO Bilbao Opera production conceived by Joan Anton Rechi, with cinematic rhythm and set in a Mediterranean village. Rechi skilfully links the plots of the two operas as if they were two chapters of the same story dominated by the most primal instincts: jealousy, infidelities, obsessive drives and murders. Albert Estany he is the director of the replenishment in Bilbao.
The scenic approach abounds in the characteristics and personality of the characters to develop the dramatic and disturbing aspect of both stories., with a scene of Gabriele Moreschi of classic and intimate cut, enhanced by lighting Alberto Rodriguez and a superb wardrobe Mercè Paloma.

MARIELA RUBIO AND RAFAEL BERNARDO INTRODUCE CAVALLERIA RUSTICANA AND PAGLIACCI IN THE CYCLE THE ABC OF THE OPERA The cycle The ABC of opera discovers the most relevant aspects of each title of the season in a keynote conference on the eve of the premiere, at Auditorium of the Bilbao Fine Arts Museum On Friday 22 October, Mariela Rubio and Rafael Bernardo, well-known journalists and directors of the Play Ópera program of Cadena SER, will be in charge of revealing the ins and outs of these two operas and the work of their composers. To access this free activity, an invitation is required, which can be picked up at the offices of ABAO Bilbao Opera or by calling the phone 944 355 100.