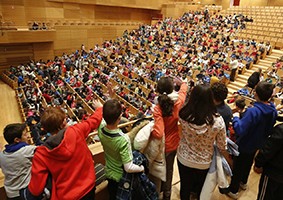 The Ministry of Culture and Tourism opens for the fifth consecutive year all the spaces of the Centro Cultural Miguel Delibes to the general public during an open day, in which the great rooms and all the corners of this building of 70.000 square meters will be filled with magic, of performing arts demonstrations and musical exhibitions of all genres to make children and adults aware of the constant flow of activity that it hosts every day. It will be during a day of three uninterrupted hours, culminating in a performance by the Symphony Orchestra of Castilla and Leon (OSCyL) what, precisely, this year marks its twenty-fifth anniversary.

music lovers, rockers, lyrical lovers, students and the general public will be able to enjoy a complete program that will occupy all the spaces of the CCMD. From the traditional welcomes in the form of fanfares, until the participation of Dj., choirs, magicians and activities for the little ones, that will make this day a special day to show all the citizens of the Community and the public that wants to approach, a cultural building that is a reference on a national scale. further, the program includes guided tours to get to know the scenic spaces, the foyer, stage, the interactive plaza, the multipurpose room, the restoration rooms, palm square, the archive and the great halls of music performances, dance and theater, among others.

This initiative was born in 2012 with the aim that all audiences know first-hand the Miguel Delibes Cultural Center, which is also the headquarters of the OSCyL.

The public that freely accesses the Miguel Delibes Cultural Center next Saturday, starting at 18.00 hours, you can enjoy chamber groups (Douro Quintet, Brunetti Together, Strings with wings); educational activities such as the program 'So many strings that I don't even remember', to bring medieval and Renaissance music closer through string instruments, or have the opportunity to play a piano at the entrance doors of the Symphony Hall. magic performances, micro theaters and choirs, They also make up a program that, equally, incorporates music with a variety as disparate as rock, flamenco and dance.

Likewise, and as a novelty, Beethoven piano concertos will be screened, with Javier Perianes on piano and conducted by the emeritus director of the OSCyL, Jesus Lopez Cobos, which was the performance broadcast by RTVE as the beginning of the acts of commemoration of the 25 years of life of the orchestra.

On the twenty-fifth anniversary of the Castilla y León Symphony Orchestra (OSCyL), anniversary that is fulfilled this season, The quality of this group could not be missing to put the finishing touch to the fifth day of open doors. Will be, precisely, the symphonic group that puts an end to a day designed by and for all audiences with a program of about 50 minutes in length and which will begin at 20.00 hours.

The program includes Symphony number 13 in E flat major, 'Drum roll', by Franz-Joseph Haydn (1732-1809); the symphony number 1 in D major, on. 25, 'Classical', by Segruei Prokofiev (1891-1953) and 'Nostalgia', play written by Greg Steyer (1963), member of the second violin section since the foundation of the OSCyL. Steyer combines interpretation with forays into composition and has written this work as a tribute and memory to the 25 years of the orchestra's career.

The OSCyL will be directed on this occasion by the concertmaster-director Roberto González-Monjas (Valladolid, 1988). González-Monjas has established himself as an interesting figure on the international music scene, being recognized for the versatility and quality of its musical activity. Es concertino de la Orquesta de la Accademia Nazionale di Santa Cecilia in Rome and the Musikkollegium Winterthur, as well as violin teacher at the Guildhall School of Music & London drama and deputy artistic director of the Medellín Philharmonic Academy, In colombia. Likewise, Roberto González-Monjas is artist-in-residence of the Castilla y León Symphony Orchestra.

The Miguel Delibes Cultural Center is a reference cultural space not only in Spain, but also in Europe. The building has 70.000 square meters of surface and since its inauguration, in the year 2007, It has been conceived as a space for the exchange of knowledge and for cultural dissemination and the promotion of ideas.
The Symphony Hall has a capacity for 1.712 people and their physiognomy, wooden deck, has been studied in collaboration with the internationally renowned acoustic engineer Yaying Xu.

The Chamber Room, with a capacity of 513 seats, It is the space of preferential use for all kinds of meetings and activities in medium format. of this space, highlights its careful aesthetic, reinforced by the use of high-quality materials, like oak and leather on the seats.

The Álvaro Valentín Experimental Theater is one of the most unique spaces of the CCMD. It represents a clear commitment to the cultural avant-garde, expressed in the aesthetic conception, functionality and new technologies. A modular and versatile space that makes it possible for capacity to oscillate between 450 and the 700 seats.

Building, which bears the name of the distinguished Valladolid writer Miguel Delibes, It is the permanent headquarters of the Castilla y León Symphony Orchestra., of the Professional Conservatory of Music, of the Superior School of Dramatic Art and the Professional School of Dance.