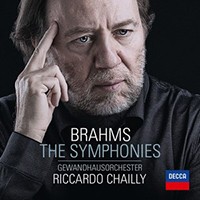 Two artists Decca, Riccardo Chailly Y Leonidas Kavakos, They have been decorated in Gramophone Awards 2014, winning awards for Best Record of the Year and Artist of the Year, respectively, in the “Oscars” classical music in London.
Both musicians were present at the ceremony at St John's Smith Square, where Chailly - who is recovering from a broken arm - also received the Orchestral Prize for his monumental cycle of the four Brahms symphonies with the Leipzig Gewandhaus Orchestra. Symphonies published in Pure Audio (Blu-ray disc) he 22 September on Decca Classics.

The Leipzig Gewandhaus Orchestra - the oldest orchestra in the world - has very gala its historical ties to Brahms. The director himself led the orchestra in Leipzig premieres of his symphonies first, second and third, as well as the world premieres of several other major works, so this album is a fitting tribute to the great composer.

James Jolly, Chief editor of the magazine Gramophone, has declared: “You can be assured that Riccardo Chailly will make us listen again to the classical repertoire, and Brahms dedicated this album is no exception. With the Gewandhaus Orchestra in an extraordinary way, we have a recording that epitomizes how classical music reinvents itself and still find relevant to each new generation”.

The Greek violinist Leonidas Kavakos was present to collect his Artist of the Year Award, decided by a public vote International. James Jolly said about: “Something that is unusual, Leonidas Kavakos has had to wait 23 years since he received his first prize Gramophone (the Sibelius Violin Concerto in its original version back in 1991). this Award, decided by public vote, honors a musician at his best that is required worldwide and has given us remarkable recordings of Brahms Violin Concerto, violin sonatas by Beethoven and Brahms Sonatas three (all for Decca)”. He handed this award Artist of the Year last year, trumpeter Alison Balsom the.

On the other hand, director Sir Neville Marriner, a musical legend, in the year of his 90th birthday, He recibibió the Outstanding Achievement Award to, specially created for him. Your prize, that was delivered by the great pianist Alfred Brendel, James Jolly said: “Sir Neville Marriner - whose work is synonymous with the Academy of St Martin the Fields, he founded more than half a century - it has enriched the catalog record as they have done very few directors. A elegant and vibrant interpreter of music ranging from the Baroque to the present day, Sir Neville recordings must appear safely in the collection of all music lovers”. Decca Classics recently released a box 28 CD with the name “Neville Marriner: Years of Argo”.

Previously announced winners and the rest of the record categories also received each of their awards. The ceremony was attended by key industry figures and musicians as Iestyn Davies, Kyung Wha Chung, Mahan Esfahani, John Butt y George Benjamin, and readers of Gramophone could live for the first time in years.

The number dedicated to the Gramophone Awards will be published 18 September with full information on the awards and the winners of the same.