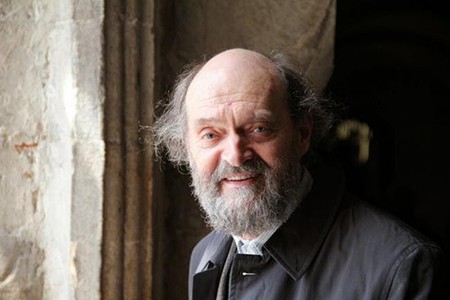 On Sunday 18 February at 20.30 hours, in the Fonseca Chapel of the University of Salamanca, the Danish side Ars Nova Copenhagen directed by Paul Hillier, worldwide premiere the work the National Center for Musical Broadcasting and the University of Salamanca They have jointly commissioned the famous Estonian composer Arvo Pärt, precursor of sacred minimalist music. In this concert, included within the activities planned to commemorate the eighth anniversary of the academic institution, Ars Nova Copenhagen group will perform ancient and modern vocal works of the Old and New World, covering five centuries of music, with pieces between which are two other productions Arvo Part, from 2012 Y 2015, and works by Hernando Franco, Manuel de Sumaya, Alonso Lobo, Abraham Wood, Christian Wolff y John Cage. "The motto of the VIII Centenary music in a mirror which reflected" indicates Bernardo García-Bernalt, director of the Academy of Ancient Music of the University of Salamanca. "We will say yesterday, by weight singular music has had eight hundred year history of salmantino Study, and say tomorrow projection of future that finds the music in this institution through close collaboration between the National Center for Music Dissemination and the University of Salamanca, collaboration that crystallizes this year, specific, in the organization of the fifth season of the series "Salamanca Barroca", After the resounding success of past editions, and the special program "Salamanca 800", It included in this major release all”. After its premiere in Salamanca, The program will be repeated in Madrid, Series in the cycle 20/21 the CNDM program at the Auditorium 400 the Museo Nacional Centro de Arte Reina Sofía (Monday 19 February, 19.30 hours) and Badajoz, as IX activity Actual Cycle Music (Tuesday 20 February, 20.30 hours).

Arvo Pärt (1935, Estonia) It is one of the biggest names in the current composition. Considered the precursor of minimalist music and one of the most radical representatives of the Soviet avant-garde, his music has undergone a profound evolutionary process, from the neo-classical piano music for the individual use of dodecaphony, composition with sound masses, Random music and art collage. In 1976, After intensive study of Gregorian chant, the “Notre-Dame School” and classical vocal polyphony, He appeared with a new and extremely original musical language that called tintinnabuli (The Bell - 'campanilla', In latin) and that has marked his work until today. Pärt is best known for his work for film soundtracks, more than fifty to date, among which are The great beauty (2013) de Paolo Sorrentino, The Lovers on the Bridge de Leos Carax (1991), Swept Away de Guy Ritchie (2002), Gerry Gus van Sant (2003), Soldados de Salamina David Trueba (2002), Elegy Isabel Coixet (2008) Y, more recently, in The Avengers de Joss Whedon (2015). Pärt is Doctor Honoris Causa by the University of Oxford from 2016.

Ars Nova Copenhagen it was created in 1979 and it is widely recognized as one of the best vocal ensembles in the world. Since 2003 its principal and artistic director is the acclaimed British director Paul Hillier, although they have also worked with Bo Holten and Tamás VETO (its two main principals above), Kaspars Putnins, Andrew Lawrence King, Anthony Rooley, Kees Books, Michael Bojesen y Soren K. Hansen and other guest conductors.

The ensemble specializes in the interpretation of polyphonic choral music of the Renaissance and contemporary vocal music, In addition to building collaborations with artists from different creative fields such as theater, film and ballet and cultivate new ways of interpreting concerts and innovative repertoires. Their interpretations of the set are characterized by precision and a sound that captures worldwide attention. With a series of annual concerts in Copenhagen and Aarhus, numerous concerts in the rest of Denmark and frequent international tours, the whole is more demand than ever. In 2015 Ars Nova made a long tour in China with more than ten concerts as a significant part of the Danish cultural campaign in the country and 2016 He participated in the Nord Choir Expedition presenting pointers chorus and vocal Nordic sets in each of the Scandinavian capitals. His upcoming tours include Spain and the US.

Ars Nova has recorded numerous CDs that have received multiple awards, including a Grammy for "The Little Match Girl Passion" with music by David Lang (Harmonia Mundi). His most recent albums are "Songs for Choir" by the Danish composer Carl Nielsen (Dacapo Records), "Gallos and Bones" with music by Pablo Ortiz (Orchid Classics) y “First Drop”, a new live CD with music by Howard Skempton, Michael Gordon, David Lang, Kevin Volans, Pablo Ortiz, Louis Andriessen, Gabriel Jackson, Steve Reich y Terry Riley (Cantaloupe). For many years Heinrich Schütz has occupied an important place in the repertoire of Ars Nova and between 2008 Y 2011 the group recorded his complete "dramatic" works for Easter and Christmas festivities. These four CDs, also available as compilation, They have earned rave reviews from the international trade press. Other notable recent publications are record “Creator Spiritus” with music by Arvo Pärt (Harmonia Mundi) Y “The Golden Age of English Part Songs” (Dacapo Records). VIII Centenary of the University of Salamanca.

VIII Centenary of the University of Salamanca

University of Salamanca meets 800 years, making it the first of the Spanish universities and one of the longest in the world. For that reason it celebrates its eight centuries of history, they are also the university system in our country. Under the honorary presidency of the Kings of Spain, the anniversary, State listed as event, develops a program that stains the city of events which aims to recall the origins of the oldest Hispanic universities.

The University of Salamanca sets relevant values ​​as the cradle of humanism and intellectual home of statesmen remembered, its rich heritage and its status as a pioneer and leader in teaching Spanish without losing sight of strategic goals of the celebration as international leadership in Higher Education, promoting academic excellence, the enhancement and recovery of assets and infrastructure and the promotion of national and international academic institution Salamanca.