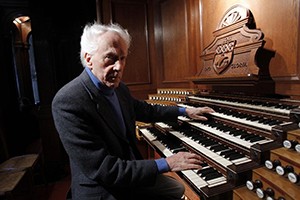 The National Broadcasting Center Musical co-produces the XXXIII International Organ Festival of the Cathedral of Leon (FIOCLE), proposed in this edition 13 concerts, from the 21 September to 10 of November, in the Leonese seo.
All concerts will be freely accessible until full capacity Cathedral.

He 15 September director National Dissemination Center Musical, CNDM (INAEM unit, Ministry of Education, Culture and Sports), Antonio Moral, with the director of the International Organ Festival of the Cathedral of Leon (FIOCLE), Samuel Rubio and the mayor of León, Antonio Silvan, He has presented the thirty-third edition of the festival, CNDM activity co-produced and included in the programming of their season 16/17. This edition proposes 13 concerts taking place in the Leonese seo 21 September to 10 November 2016. These activities continue CNDM commitment to promote and recover the ancient musical heritage throughout the country, through its programming in twenty Spanish cities and four foreign (Bogotá, Munich, Vienna and Elvas, Portugal).

The programming of the thirty-third International Festival of Organ of the Cathedral of Leon maintains its essence with eight recitals organistic biggest names in world outlook while opening its doors to five other musical offerings by leading Spanish historical music sets. the Viennese Martin Haselböck, organist and director of orchestra recognized internationally for being the artistic director and founder of the prestigious ensemble Wiener Akademie, will attend to inaugurate the festival on Wednesday 21 of September, with a tour that opens with the famous Toccata and Fugue in D minor of J.S. Bach and includes volumes, one of the most important works for organ by Ligeti and contemporary organ literature, what will add improvisation on a given theme, exploiting all the possibilities of this magnificent organ. The second date, two days later, will transport the audience to the Middle Ages through the music accompanying the dances staged the European Middle Ages, most of them unknown author, leonine hand set Eloqventia and its director, Alejandro Villar. The third evening resubmitted harpsichordist Eduardo López Banzo accompanying the singers selected in the Baroque Vocal Interpretation Course organized by the CNDM in the Auditorio Ciudad de Leon and run by the same Banzo each year: las sopranos Elia Casanova, Rosa Garcia Dominguez and Muñoz also Quiteria Inglada countertenor Christian Gil Borrelli, young artists who excelled in the interpretation of Baroque cantata and sing Italian arias at this concert four great masters of that time: Carl Philipp Bach, Antonio Vivaldi, George Frideric Haendel y Antonio Caldara.

This year marks the third anniversary CNDM death of Baroque composer Sebastian Duron (1660-1716), with a transverse cycle consisting of thirteen concerts that will travel throughout the country. Two of those appointments will be included in this festival: in the first, soprano Raquel Andueza and whole the Galania, place the alcarreño genius as the core of a program that explores the sacred music of that era, through various manifestations of religious music (and sung tones Duron) with any corporation or other contemporary page yours as Carlos Subias, Antonio Martin y Coll and Gaspar Sanz, which they will perform its known Folías. In the second program starring Duron, the Chapel Jerome Carrion and its director Alicia Lazaro They were immersed in unpublished music of the seventeenth century, Duron contrasting vocal scores of sacrum, as well as three other great representatives of Spanish baroque: Juan Hidalgo de Polanco, José Marín and Jerome Carrion. In the last concert of the organ will not only hear the medieval treasures of file rescued by Leon Cathedral Juan Carlos Asensio and his group Schola Antiqua, in what will be the first performance in modern times of processional liturgies of Saints Isidoro, Antolín and Santiago.

Besides Haselböck, the festival will collect in the organ concerts a broad stylistic and temporal spectrum, Iberian works of literature, prominent figures of the late Romanticism of Liszt -case or Franck-language and contemporary Messiaen. No less interesting will result the recovery of two traditions closely linked to the king of instruments, improvisation and adaptation of scores from other sound fields, as a sonata for piano of Beethoven or Wagner opera scene. These spectacular versions exploit the concept of organ and orchestra, something that Widor, with his symphonies written directly for the instrument, He was a teacher. A) Yes, leonine public can listen in this edition organists Juan de la Rubia (head of the Holy Family, which will travel in his program works by Bach, Franck, Duruflé and the original settlement of the "scene Walhalla" belonging to the opera Götterdämmerung Wagner), Giampaolo di Rosa (Leon will present the complete works for organ by Olivier Messiaen, alongside works by Franck and Beethoven), Vincent Dubois (one of the organists holders of Notre Dame de Paris, He has chosen repertoire of three of the most important composers in the history of organ: Bach, Franck there Messiaen, what will add an extraordinary transcription for organ danse macabre Saint-Saëns), Jean Guillou (a true living legend of the organ who was an adviser in the construction of the new organ of the Cathedral of Leon, returns to it with a program consisting of a movement sixth Symphony de Charles-Marie Widor, a work of Liszt and two own songs), Daniel Oyarzabal (which will begin its concert with the famous Cantata BWV Symphony 29 Bach teacher, who they will be accompanied by his two compatriots pieces of Mendelssohn and Brahms and Messiaen works, Rimsky-Korsakov and Mussorgsky y), Paolo Oreni (you have chosen for the occasion scores of Mozart, Bach, Liszt, Dupré and improvisation itself) and Lebanese interpreter Naji Hakim, which will close the festival on Thursday 10 November with the famousPassacaglia Bach with parts Cabanilles, Franck and own works.

All festival concerts will be free access until full capacity Cathedral.