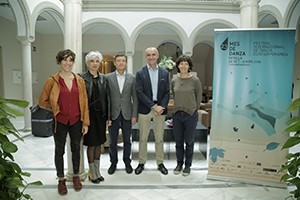 MONTH OF DANCE, international festival of contemporary dance in Seville, celebrates the 26 October to 6 November 23rd edition. The festival will host 22 different companies and a total of 43 functions along an eclectic program which will be drawn, in which they play in equilibrium transgression and more conservative proposals.

One more year, MONTH OF DANCE will cycle in the Dance Unique Spaces one of its most recognizable identity, bringing dance to unusual places like the Metro Puerta Jerez, the Archive of the Indies, skate tracks Plaza de Armas or hotels Petit Palace Marques Santa Ana Petit Palace Santa Cruz. The programming will visit the Central Theater room, the Sala Manuel García of the Teatro Maestranza, he Teatro Alameda Y Foundry.

creators Arturo Parrilla, hand Mobile Dance, Teresa Navarrete, Natalia Jimenez Y Jorge Gallardo, Fernando Hurtado, Jesus Rubio, Celeste González, Alberto Cortés, Marta Camuffi O Asha Thomas are some of the names that populate a poster that will have three premieres: "In vain", of Mobile Dance Co., "Alf" of Silvia Balvín Y Alberto Almenara, and "Empty Work", Natalia Jimenez and Jorge Gallardo. "Empty Work", Besides, It is presented as the culmination of creation of two artists who could already be seen in the Creations program in the editing process 22 festival.

Creations Process The program aims to provide a context and a favorable time for choreographic creation, allowing airlines residencies and offering the possibility of releasing his work in the festival. A) Yes, within this program, this year will be at the Center for the Arts in Seville the work in progress Miguel Marin, Laura Morales Y Roser Tutusaus qualified A life full of rivers and mountains.

Within these creations in progress, deserves a mention apart Shapers. MONTH OF DANCE participates with other entities engaged in the promotion of dance in France, Morocco, Egypt and Bosnia – Herzegovina in the Euro-Mediterranean training and creation project Shapers,mentored by veteran French company specializing in dance in public spaces Ex Nihilo. After passing through the project partner countries, the end result is a choreographic work involving 8 Young dancers from Egypt, Morocco, France and Spain. The strong interest in its programming since its inception by the choreographic creation in public spaces and the contribution to the training of young Spanish dancers were the inducements for MES DANCE will add to this project, whose premiere expects to host in its next edition.

In 2016 DANCE MONTH launches pilot "Baila Mi Cole" is a pilot, with which aims to bring dance to schools. Students in 5th grade of Juan Nepomuceno Rojas of Seville College will work daily for three weeks and within their school schedule a piece of contemporary dance. The classes will be taught by dancer and choreographer Elisa del Pozo, who has worked with dance as a tool in education. The piece to be worked during the three weeks of class will be presented at the Alameda Theatre on Saturday 29 October as a prelude to the function for family show "Flower Blossom", Malaga company of Fernando Hurtado.

DANCE MES also offer in 2016 an extensive program of parallel activities. Luis Castilla, official photographer of the festival since its inception, rewrites his workshop "Instantes Movements", a look of author in dance; journalist Omar Kahn give a workshop Journalism and Dance research focused on the current context of dance in project countries SHAPERS (Morocco, Egypt, France, Spain and Bosnia - Herzegovina), focusing on the socio-cultural aspects that influence the creation in the five social contexts in which the initiative is developed; meanwhile Matxalen Bilbao choreographer will teach a course in contemporary dance in collaboration with Antonio Ruiz Soler Conservatory. Registration for all these activities can be done through mesdedanza.es

Apart from training, DANCE MES also hosts within the program of parallel activities session projections in collaboration with the International Film Festival of Barcelona and Dance Choreoscope and SEFF European Film Festival in Seville.

As another remarkable novelty, MONTH OF DANCE take first contemporary dance to the Penitentiary Sevilla 1, with special representation on 3 November show "In Vain", Mobile Dance Company. A program in collaboration with SOLIDARIOS, NGO working since 20 years bringing culture to people who are deprived of their liberty, trying to generate synergies that favor relations between internal, guests and volunteering.

Along with collaborations already mentioned, DANCE MONTH again an exchange program with Circada Festival and to launch the "Carta Blanca A ...", this year has offered to Bilbao Smelter, performing almost 3 decades extraordinary work in favor of disclosure of dance and support for Basque creators and proposed programming Igor Calonge / Cielo Raso, Matxalen Bilbao Y Ms. Polaroiska. It has also been programmed to the winning company Contest Contemporary Contemporary Women of Costa Almeria (Marta Camuffi).