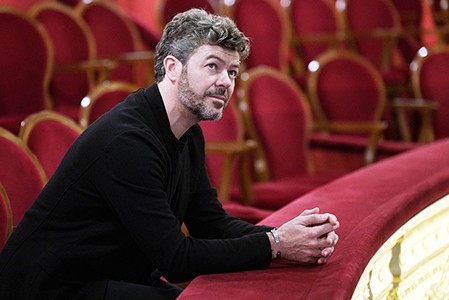 The main guest director of the Teatro Real and Ambassador of Ayuda en Acción, Pablo Heras-Casado, will lead the Madrid Symphony Orchestra for the sixth consecutive year to direct the concert Chords with Solidarity, an initiative led by the director himself and Ayuda en Acción. The appointment will take place on Monday 19 October at 20.00 hours at the Teatro Real in Madrid. This time, the Coriolano Overture and Symphony No.. 7 Beethoven, coinciding with the 250 anniversary of the birth of the German composer which is celebrated this year. Back in 2001, Pablo Heras-Casado made the genius of Bonn sound for the first time with his Seventh Symphony and, at the end of this year and repeating repertoire, There will be almost a hundred interpretations of Beethoven that the director has directed throughout his career in some important moments such as his debut with The Cleveland Orchestra or the Los Angeles Philharmonic.

The present time of this author does not only reside in the resignification of his message, but in a music that never ceases to amaze. In the words of the director himself "It is the occasion to restore Beethoven's strength, the impact and novelty that must not be lost over time ". In March of this year, the prestigious magazine "The Gramophone", Alluding to his performance with the Freiburger Barockorchester, he applauded the success of "Let Beethoven be Beethoven. Rhythmic displacements, the explosive forces, the dynamic contrasts that disarm and beg for sincerity, juxtaposed with brutally empathetic insistence, create a sense of wonder and awe that the Viennese audience (…) must have experienced when listening to Beethoven for the first time; the care and conscious consideration of every detail, they leave on the listener an impression of complete abandonment and surrender to the spirit of music ".

Heras-Casado, the Freiburg Baroque Orchestra and the pianist Kristian Bezuidenhout have teamed up once again with the record label mundi harmony in the recording of a special series dedicated to Beethoven. They have left a record of the Comprehensive Piano Concertos of the Bonn composer and some of his Openings, already on the market -except for the last of the discs of this integral (Concerts 1&3) whose launch is scheduled for August next year, as well as the “Triple Concerto” (with violinist Isabel Faust, cellist Jean-Guihen Queyras and pianist Alexander Melnikov) which is expected for January 2021. As a finishing touch to the aforementioned collaboration with the Freiburger Barockorchester and the pianist Kristian Bezuidenhout, a very special disc has been recorded with the Choral Fantasy and the Ninth Symphony, with which Heras-Casado will close the year Beethoven with the NHK Symphony Orchestra Tokyo in his traditional end-of-year project. A closing full of light and hope that adds to a wide repertoire of the great composer played, still still, in this year of celebration on stage, where they stand out Violin Concerto in D major, the 2nd, 3ª, 5ª, 7Symphonies and 9th, he Triple Concerto and the Concert Piano 4 in its full and camera versions. On stage some of the best ensembles on the scene such as The German Chamber Philharmonic Bremen, European Union Youth Orchestra, Orchestra of the Reina Sofía School of Music, Montreal Symphony Orchestra, Philarmonia Orchestra, Karajan Academy of the Berlin Philharmonic, the mentioned NHK one to Madrid Symphony Orchestra, in charge of bringing the next day's program to the lectern 19.

In this sixth edition of the Chords with Solidarity initiative, the proceeds will go entirely to the response that Ayuda en Acción is giving to the emergency caused by COVID-19 in Spain. Through the Program Here too, the NGO is fighting to reduce the digital and educational divide that has become evident and accentuated after the pandemic, supporting about 11.000 children, girls and adolescents who are at risk of social exclusion in Spain to which can access education with equal opportunities. “It is a solidarity initiative fruit of a great alliance in which our extraordinary ambassador Pablo Heras-Casado and the Madrid Symphony Orchestra take part., who participate in the concert in a completely altruistic way; Royal Theatre, supporting us with the dissemination of this great event; and the Repsol Foundation, who also collaborates with our program Here also in Spain. One more year, We thank all of them for their unconditional support and we extend it to the general public of the Royal Theater that, with your input (in person or via streaming) and with your contributions to the row 0, allow us to continue our work that is now more necessary than ever”, affirms Marta Marañón, Director of Institutional Relations of Ayuda en Acción.

as a novelty, emphasize that the concert it can be enjoyed live by streaming from any part of the world. Tickets for the broadcast online, that are already on sale, can be purchased on the platform's website My Opera Player by 9,99 euros. For those people interested in attending the appointment in person, they can buy their tickets (from 10 €) through the Teatro Real website on the phone 902 24 48 48 and at the theater box office. A row has also been enabled 0 for donations in account number ES55 0049 0001 58 2911863843. The event will be held at 50% of its capacity, with separation between seats and following all security protocols.