The influence of Shakespeare in the musical Baroque, with Maria Grazia Schiavo 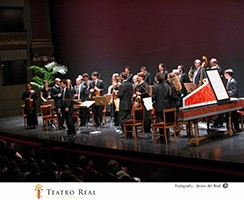 As part of the commemorations of the fourth centenary of the death of William Shakespeare (1564-1616), he Teatro Real will offer a concert with soprano Maria Grazia Schiavo and the prestigious orchestra Les Talens Lyriques, under the direction of French director and harpsichordist Christophe Rousset.

For this musical tribute they have chosen works inspired by comedies and dramas of the great English writer throughout the centuries XVII and XVIII, sieved and recreated by the librettists of each period, and within the musical and aesthetic opinions of different eras.

A) Yes, along this attractive concert entitled Music for a While – A Tribute to Shakespeare, you can enjoy the evolution of European musical taste from the English Baroque singular Henry Purcell (1659-1695) to the dawn of the German Classicism Carl Heinrich Graun (1704-1759) With the growing influence of Italian opera, who seduced audiences across Europe.

Opens the music program Purcell: three pieces of semiopera fab The Fairy Queen (The Fairy-Queen), based on an adaptation of the comedy The dream of a summer night, and recitative and aria The Tempest (The Tempest), in which the composer gives voice to the inhabitants of the island Prospero's enchanted, "Full of rumors, sounds and melodies that delight and hurt not ", as Shakespeare wrote.

Without leaving England, but already with the breath of Italian opera, They follow the overture and two arias Giulio Cesare in Egitto (Julius Caesar in Egypt), the most famous heroic opera georg Friedrich Handel (1685-1759), moving away from historical tragedies of Shakespeare Julius Caesar and Antony and Cleopatra to focus on the relationship of love and lust between the Roman dictator and Cleopatra.

Concludes the first part between England and Italy, with Italian violinist and composer Mary Lou (1690-1768), whose career no deviation in the two countries. With his latest melodrama, Beautiful rose, He bids farewell to the English capital, rescuing wild and spunky heroine Shakespearean comedy As You Like It.

Con Carl Heinrich Graun (1704-1759) We crossed the North Sea and forward in time, but follows the growing influence of Italian music. This prolific composer famous tenor and was one of the most important figures in the transition between Baroque and Classicism as denoted opera Coriolanus, from which the overture and recitative and aria be construed.

The evening will conclude with excerpts from Romeo und Julie, of the Czech composer Georg Anton Benda (1722-1795) mixing the precepts of the Italian melodrama with the most dramatic and dark part of the Shakespeare play, a curious flourish Singspiel, devoid of all humor of the original work.

He studied with Raffaele Passaro at the Conservatory of Naples, your natal city, where he graduated with honors. After winning several international competitions, scenically he debuts with the title role of The cat Cinderella, and he specialized in Baroque repertoire and chamber music. His recent performances Rinaldo (Champs-Elysées Theater), The abduction from the Seraglio (Roma) Y Demofoonte de Jommelli (Salzburg, Paris) Riccardo Muti with the have reaffirmed as one of the most important sopranos of her generation. his repertoire, which highlights works of the eighteenth century Neapolitan as The Pulcinella avenged, Motezuma and Partenope, also it includes L'Orfeo, La Didone, statira, Lucia of Lammermoor, The Magic Flute, Don Giovanni, La traviata and numerous vocal works by Wolfgang Amadeus Mozart, Giovanni Battista Pergolesi y Georg Friedrich Händel. He has performed at theaters like the Comunale of Bologna, Regio Torino, La Fenice in Venice, the San Carlo in Naples, Rome Opera, the Royal Opera Liege, el Theater an der Wien y el Mozarteum de Salzburgo.

Internationally renowned harpsichordist, musician and bandleader inspired by the passion for opera and European musical heritage. He studied at the Schola Cantorum de Paris and the Royal Conservatoire in The Hague, and in 1991 Fundo Les Talens Lyriques. He is an accomplished performer of the keyboard works of François Couperin, Jean-Philippe Rameau, Jean-Henri D’Anglebert, Antoine Fourqueray y Johann Sebastian Bach, and his recordings have received numerous international awards. Como director de Les Talens Lyriques, He has performed in the most prestigious concert halls, como el Theater des Champs-Elysees, the Salle Pleyel, the Lausanne Opera, Royal Theatre, el Theater an der Wien, el Barbican Centre, Carnegie Hall, the Concertgebouw in Amsterdam and festivals of Aix-en-Provence and Beaune. He has also visited, as a guest conductor, the Liceu, the San Carlo in Naples and the Teatro alla Scala in Milan. Organizes and conducts numerous master classes and academies for young. Ha sido nombrado Knight of the National Order of the Legion of Honor, Commander in the Order of Arts and Letters is Knight in the National Order of Merit.

Takes its name from the subtitle The Feasts of Hebe Rameau. His lyrical and instrumental covers of the first Baroque repertoire to Romanticism, playing with the same assiduity the masterpieces of music history and little known or unpublished sheet music of Monteverdi, Cavalli, Händel, Lully, Mondonville, Martin y Soler, Mozart, Salieri, Rameau, Gluck, Beethoven, Cherubini, Berlioz, Massenet is Saint-Saëns. With its director, Christophe Rousset, He has collaborated with renowned directors such as Pierre Audi Scene, David McVicar, Claus Guth, ish Vigner, Ludovic Lagarde a Robert Carsen. In addition to the operatic repertoire, frequents other musical genres, as the madrigal, the cantata, he air courtyard, Symphony and much of the repertoire of sacred music. Since 2007 He works musically with young Parisian students, organizing numerous workshops and residencies music teaching. Supported by the French Ministry of Culture and Communication and the City of Paris, as well as the Patrons Circle and Annenberg Foundation / GRoW–Gregory and Regina Annenberg Weingarten.

Dance for Chinese man and woman

Recitative and aria of Aeolus:

“Your awful voice – Come down my blusterers”

Cleopatra arias: "If you do not feel pity on me"

"Since the storms shattered wooden"

“Ah! no my Coriolanus - Without you my love "