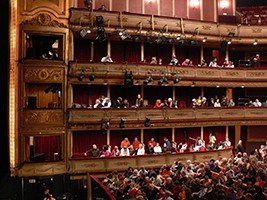 He Teatro de la Zarzuela will offer next Wednesday, day 23 from December, to 20 h. traditional Christmas Concert, this time with a particular format that we hope will be of great interest to the public.

In this concert we will have the opportunity to delve into two zarzuelas as delicious as rarely performed: flamingos Y Good fortune both with music Amadeo Vives and acclimated in Madrid. The first is based sainete of Arniches and the second is developed in the courtly Madrid of the early seventeenth century that portrays Cervantes in the Gypsy Girl, work which is inspired.

Two actresses will call us, semi-staged version the arguments on which its delicious musical numbers fall.

This concert is also a tribute to the talent of Carlos and Guillermo Fernandez-Shaw, coauthors of the respective books, the occasion of 50 anniversary of the death of the latter.

The musical direction will be borne by Christopher Soler and Javier dramaturgy of God.